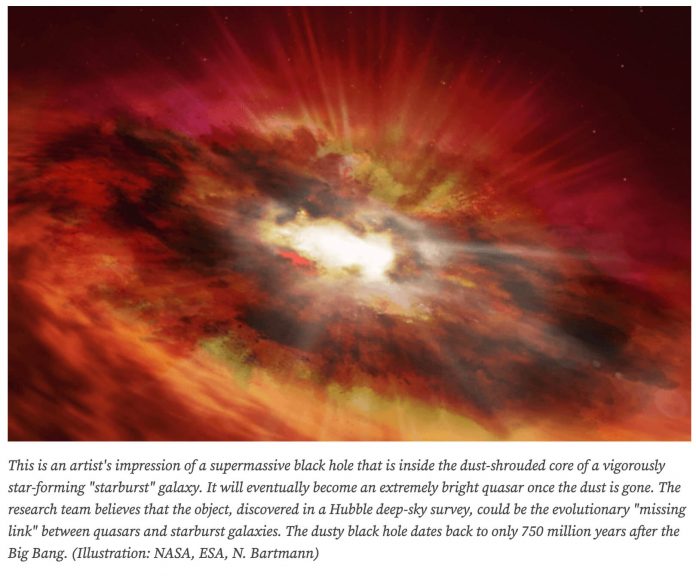 COPENHAGEN, Denmark — Astronomers believe they’ve discovered a critical “missing link” out in space from beginning of the universe. This rapidly growing black hole appears to be at a point where it’s in between being a young star-forming galaxy and a supermassive black hole.

One of the universe’s earliest spectacles

Hubble determined that GNz7q is a newly formed black hole after discovering a compact source of ultraviolet (UV) and infrared light. Until now, scientists have only predicted the existence of these missing links in dusty, early star-forming galaxies but have never seen one.

“Our analysis suggests that GNz7q is the first example of a rapidly growing black hole in the dusty core of a starburst galaxy at an epoch close to the earliest supermassive black hole known in the universe,” explains Seiji Fujimoto, an astronomer at the Niels Bohr Institute of the University of Copenhagen, in a media release. “The object’s properties across the electromagnetic spectrum are in excellent agreement with predictions from theoretical simulations.” 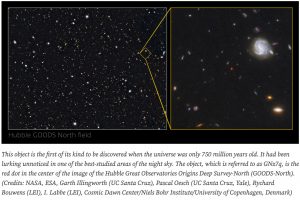 How do supermassive black holes grow so fast?

Researchers theorize that these enormous singularities start out as dust-shrouded cores of star-forming “starburst” galaxies before they expel the surrounding gas and turn into extremely bright quasars.

Although both of these stellar phenomena are rare, astronomers have detected both starburst galaxies and quasars in the early universe. It’s that “missing link” which hasn’t been detected until GNz7q. The study finds GNz7q exhibits both aspects of a dusty starburst galaxy and a quasar.

“GNz7q is a unique discovery that was found just at the center of a famous, well-studied sky field – it shows that big discoveries can often be hidden just in front of you,” adds Gabriel Brammer, another astronomer from the Niels Bohr Institute. “It’s unlikely that discovering GNz7q within the relatively small GOODS-North survey area was just ‘dumb luck,’ but rather that the prevalence of such sources may in fact be significantly higher than previously thought.”

Passing the torch to James Webb

The team notes that the only reason they found GNz7q hiding in relatively plain sight is because of the uniquely detailed, multiwavelength datasets available in GOODS-North. Without that information Hubble sent back to scientists, the team would have missed the black hole’s presence. This is because the missing link doesn’t contain the same distinguishing features astronomers look for when searching for quasars.

“Fully characterizing these objects and probing their evolution and underlying physics in much greater detail will become possible with the James Webb Space Telescope,” Fujimoto concludes. “Once in regular operation, Webb will have the power to decisively determine how common these rapidly growing black holes truly are.”

The study is published in the journal Nature.

After 20 years, scientists discover the cause of a mysterious solar flare with ‘dark finger-like features’ CAMBRIDGE, Mass. — A strange solar flare has baffled astronomers...
Read more