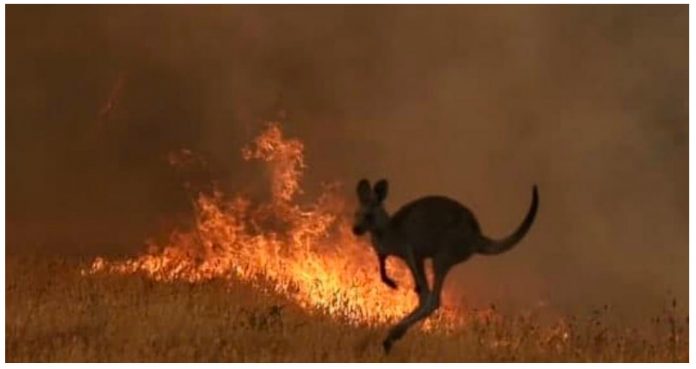 Authorities in Australia have arrested close to 200 people for deliberately starting the bushfires that have devastated the country, yet the media and celebrities continue to blame “climate change” for the disaster.

The fires have caused at least 18 deaths, destroyed thousands of homes, millions of hectares of land and killed hundreds of millions of animals.

A total of 183 people have been arrested by police in Queensland, NSW, Victoria, South Australia and Tasmania for lighting bushfires over the last few months, figures obtained by news agency AAP show.

In New South Wales, 24 people were arrested for arson, risking prison sentences of up to 25 years.

In Queensland, police concluded that 103 of the fires had been deliberately lit, with 98 people, 67 of them juveniles, having been identified as the culprits.

“The link between arsonists and the deadly fires that devastate Australia every summer is well known and well documented, with the rate of deliberately lit fires escalating rapidly during the school holiday period,” reports Breitbart’s Simon Kent.

Around 85 per cent of bushfires are caused by humans either deliberately or accidentally starting them, according to Dr Paul Read, co-director of the National Centre for Research in Bushfire and Arson.

“About 85 per cent are related to human activity, 13 per cent confirmed arson and 37 per cent suspected arson,” he said. “The remainder are usually due to reckless fire lighting or even just children playing with fire.”

Read also highlighted the link between school holidays and kids starting fires, commenting, “School holidays are a prime time for fire bugs, but especially over summer.” The kids have got time to get out there and light, and the most dangerous adults choose hot days.”

Police are now working on the premise arson is to blame for much of the devastation caused this bushfire season. A strike force will investigate whether blazes were deliberately lit, and bring those responsible to justice. https://t.co/TWh1KQycs4 @ebatten7 #NSWFires #7NEWS pic.twitter.com/Dul8dMFrZv

“Police are now working on the premise arson is to blame for much of the devastation caused this bushfire season,” reports 7 News Sydney.

New environmental policies that restrict “prescribed burning,” where land owners burn off flammable ground cover in cooler months in a controlled manner so it doesn’t contribute to bushfires, have also exacerbated the problem.

The fact that the bushfires were deliberately started and have nothing to do with man-made climate change hasn’t prevented that being the dominant narrative.

Last week, Bernie Sanders blamed those who were “delaying action on climate change” for “the blood-red sky and unbreathable air in Australia because of raging forest fires.”

Virtue signaling celebrities have also pounced on the issue to push their dogma, including at the Golden Globes last night when Australian-born Cate Blanchett asserted, “When one country faces a climate disaster, we all face a climate disaster.”

Australian-born Cate Blanchett took to the stage at the #GoldenGlobes to highlight the wildfires fires ravaging her native country and demand action against climate changehttps://t.co/pVuyhgrFDh pic.twitter.com/Bb25YwfQGi

They must be really desperate to keep the false climate change narrative alive to do such stupid things. Not only do they destroy lives and the economy, but kill people as well. What kind of mindset do you need to do this?

Previous articleLeftist Brainwashing
Next articleLike Father, Like Son Winding Up The Lefties

Electric Vehicles Are A Tool Of Tyranny Written by Duggan Flanakin First, don’t blame the vehicle. It is a tool that might be just what Los Angeles needs...
Read more