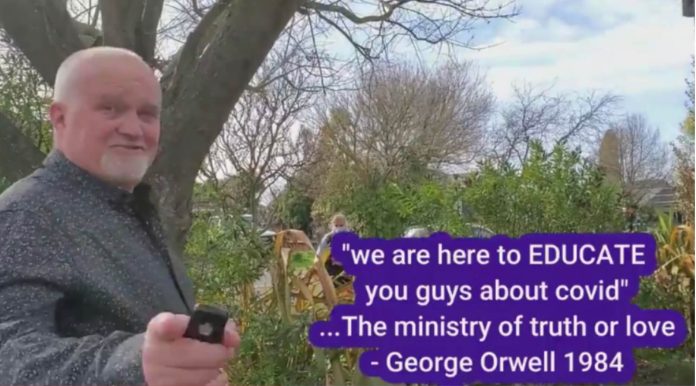 By TONY MOBILIFONITIS
A FEISTY Kiwi pastor has told Jacinda Ardern and her Labor Party vaccination cabal to shove their shots and get their noses out of church business. Ardern is threatening to fine church leaders $15,000 if they are not vaccinated by December 3.

Pastor Carl Bromley of the Life Connection Missionary Baptist Fellowship in Christchurch says Ardern has crossed the line of respect between church and state. Ardern’s socialist-fascist regime is also trying to silence another high-profile and outspoken pastor, Brian Tamaki, who has been loaded with onerous bail conditions on charges of breaching so-called health orders by running a protest rally.

They have dug themselves into a hole of blind obedience to a corrupt narrative and they have no alternative but to dig deeper in the hope that the populations will follow them into the dystopian hell they are creating.

The slick and slimy Hipkins says he expects children aged five to 11 to start being vaccinated before the end of January, based on the notoriously compromised US FDA giving Pfizer the go ahead for five to 11-year-olds, subject to New Zealand approval from their regulator Medsafe.

Ardern claims she won’t push vaccination for children, but protesters across the country are making their distrust of her “promises” known, forcing her to cancel her appearances at country vaccination centres. Ardern’s next PR project will be her marriage over Christmas to her spin doctor husband Clarke Gayford.

The media will fall over themselves portraying this “oh so lovely event” in the seaside city of Gisborne as almost the equivalent of a royal wedding. Ardern’s circle of leftie supporters in the international media will be on to it as well. But will it be a public relations coup that leaves a bitter taste in the mouths of the many Kiwis destroyed by lockdowns, fines and now coerced vaccination.

The protests of pastors Bromley and Tamaki and others like megachurch pastor Peter Mortlock, touch upon the fundamental battle for the rights and freedoms that Ardern is systematically destroying on behalf of her globalist masters.

Whether or not you agree with Bromley’s hard-line theology, freedom of religion, speech and thought are essentially the same thing, hence their inclusion in the US Constitution’s First Amendment. They are also fundamental to English common law in the English Bill of Rights 1688 and international law.

The right at common law to informed consent to medical treatment is based on the law of trespass ie you have the right to bodily integrity free from uninvited threats and assault from individuals or the state. This is also recognised in the Nuremberg Code.

“I’ve got a message for Jacinda Ardern, Chris Hipkins, Ashleigh Bloomfield, Andrew Little and any other of their cronies: Get your noses out of God’s business. God has a message for them from His word: God is not mocked,” Bromley announced on a YouTube message below. He went on to accuse Ardern and company of shaking their fist at God and said this would induce divine judgment.

Tamaki, the outspoken head of a South Auckland’s Destiny Church, told the New Zealand Herald he would rather “live in dangerous freedom than live in peaceful slavery”.

On Twitter he posted: “So a segregated, divided NZ is just around the corner with The Vaxxed No Vaxxed divide. We have been conditioned for some time now in the workplace, shops, businesses, services and among our own families. Is this what we want NZ? Is this the future for our kids?”

Mortlock, despite his megachurch’s corporate charity status with wages paid by the government, supported Tamaki’s recent protest and referred his congregation to the website of the organisers, the Freedom and Rights Coalition. “I was asked to be involved in it way back and I’ve taken a back seat in it, but enough to say if you want to go I just want to let you know about it. I think sooner or later we are going to have to make a stand – a stand for our rights, the way our freedoms are being stripped away.”

What makes it difficult for Tamaki, Bromley and Mortlock is that other churches are playing ball with the tyranny while a large, apathetic segment of the population simply go along with their mainstream media’s blatant lying and falling for Ardern’s sickly “charm”.

Bromley recently held a service in defiance of the country’s so-called “alert level 4” which bans gatherings outside of households. A YouTube post of a confrontation between Bromley and police was removed “for medical misinformation” – a code for Ardern’s censorship of anti-government information.

New Zealand’s NewsHub service made the following comment about anti-vaccine protests that would be laughable if it were not serious: “Some anti-lockdown activists have compared New Zealand’s restrictions to the horrific Nazi regime of the 1930s, but there are marked differences between the two.

“While the Government’s alert level 4 regulations are designed to stop people falling ill and dying from COVID-19, the Nazi Party actively sought to marginalise, imprison and exterminate groups it deemed undesirable, particularly Jews and political dissidents.”

Why do we have to rely on overseas media to get this information?