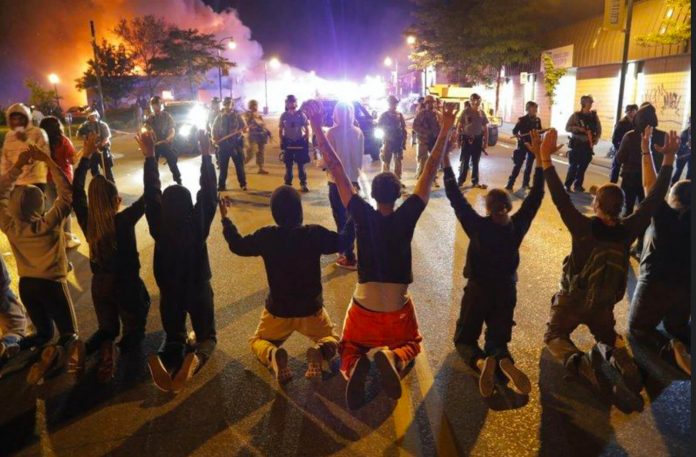 After Allowing Riots To Burn Through City, Minneapolis Mayor Wants US Taxpayers To Foot the Bill

Local and state officials will be seeking federal assistance to pay the cost of the damage done to Minneapolis during rioting that took place after the death of George Floyd.

Democratic Mayor Jacob Frey said that so far, damage is estimated at $55 million, according to the Minneapolis Star-Tribune. That estimate, compiled as of Tuesday, is not expected to be the full tally.

Frey said damage to Minneapolis and sister city St. Paul will be in the “tens, if not hundreds of millions” of dollars.

“We will do everything we can as we shift to recovery mode,” Frey said, according to the Star-Tribune. “We’re recovering from crises sandwiched on top of each other, from COVID-19 to the police killing and then the looting which took place afterward.”

Gov. Tim Walz said he and Frey have talked to federal representatives about getting money from Washington.

“[W]e have expressed some of our desires to explore what we can do there,” he said, according to the Star-Tribune.

If past practices hold, the city is not likely to be supported by the Federal Emergency Management Agency. Baltimore sought FEMA funding after the riots that followed the 2015 death of a man in police custody named Freddie Gray. No funding ever materialized, the Star-Tribune reported.

Democratic Rep. Betty McCollum, who represents parts of Minneapolis, said FEMA funding would ultimately need to be approved by President Donald Trump, who has criticized Frey’s tactics in handling the riots that broke out in Minneapolis.

Although the city could seek funding through the federal budget process, that would require the Democratic-led House, Republican-led Senate and Trump to all give the city what it wants.

“To be realistic, the odds of that happening are, at best, very difficult,” McCollum said, according to the Star-Tribune.

McCollum said the only way the city might get federal help is if it can convince Trump to declare a federal emergency, and city officials can show the city had been victimized by forces beyond its control.

“If it is demonstrated outside provocateurs committed acts of destruction then there is a clear rationale for an emergency declaration by President Trump,” she said.

Democratic Rep. Ilhan Omar, who also represents the city, said Congress must allocate funds to fix damage caused by rioting she has called a manifestation of a dysfunctional society.

“We have a moral responsibility to help communities heal economically,” she said in a statement on her website. “Minneapolis’s economy has been ravaged. Families are struggling to find places to buy food, local shop owners fear they’ll never been open their doors again, and many workers find themselves without a job to return to.”

Omar’s statement made it clear that she doesn’t consider the damage to be the fault of the rioters.

“The situation facing our city stems from a long history of discrimination, prejudice and violence in the community. It is no less worthy of federal relief than communities facing natural disasters or the COVID-19 pandemicm” she said in the statement. “But we cannot rely on a Presidential Emergency Declaration to help direct FEMA resources to riot relief. Our current President has proven we cannot depend on such intervention. So Congress must step in.”

Frey said that even before the riots, the city was battling a $165 million budget gap.

“This will be a budget crunch. To say otherwise would be dishonest, but we are committed to the city,” Frey said, according to the Star-Tribune. “We have a committed team, and I know between our city enterprise and the strength of our communities, we’re going to get through this.”

Some criticized the appeal to American taxpayers to fix the city.

Cities and states that are calling for and attempting to defund their police departments, should not be granted federal funds. If you’re going to defund the police, use that money!

So, Federal taxpayers should foot the bill — even tho it was Minneapolis politicians that chose to abandon the city’s 3rd Precinct station which protesters then set fire to.

Separately, Frey defended his decision to allow the Third Police Precinct in the city to be overrun by rioters.

“Simply by the numbers, we were going to be overwhelmed. It’s a matter of math, not planning,” he told WCCO. “Our resources were beyond tapped. We had around 30 – 50 priority one calls that weren’t being responded to at any given moment, on top of what was happening. We were overwhelmed. Every available officer was out.

Only lefty fuckwits would watch from the sidelines while their supporters trash their city, AND then expect the Nations taxpayers to pay for their negligence.

Previous articleHave Your Say
Next articlePrince of Paedo