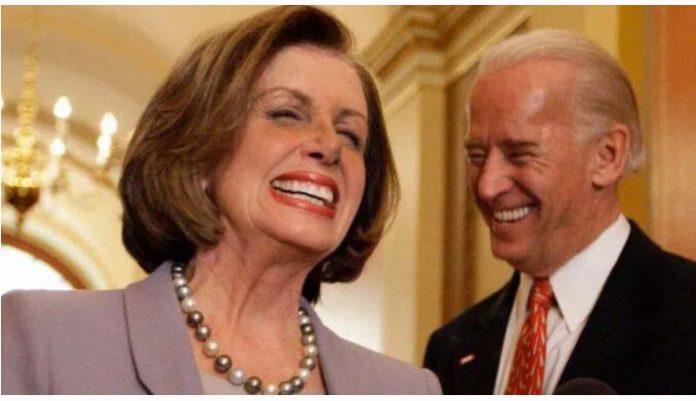 Democrat leaders claim their HR 4 legislation, that passed the House down party lines with a final vote of 219-215, is about people’s “voting rights.”

Following the bill’s passing, they openly boasted that the new law will give anybody and everybody “access to the ballot.”

It should be noted that no Republicans voted for the federal takeover of American elections.

The mainstream media predictably repeated the Democrats’ false claims that the legislation was a “voting rights bill” because not a single reporter bothered to read the “new” House Resolution 4.

Thefederalist.com reports: Instead, the bill cynically adopts into federal law every losing argument advanced by the vast leftwing elections industry to courts across the country for years. Every theory rejected by the courts has been enshrined in HR 4. The bill also hands control of our elections over to the radical leftwing attorneys in the Voting Section of the U.S. Department of Justice.

Such a brazen power grab to ensure Democrats’ permanent control of a majority of House seats forever should be the subject of extensive focus, news coverage, and criticism—which might yet happen if some reporter were to actually read the bill rather than regurgitating spurious Democrat talking points anguishing over the state of voting in 1965, none of which apply today.

House Democrats’ frantic push to perpetuate their power was actually acknowledged by at least one of their media cheerleaders. Three days after the new HR 4 was finally introduced, Hayes Brown wrote at MSNBC and Real Clear Politics that it might yet be “too late” for the Dems to seize control of the law to protect their House majority.

“[F]or all the improvements in [HR 4], the clock keeps ticking,” Brown wrote. “Every week that passes without this bill becoming law, the greater the chance that Republicans will win back control of the House before a single vote is cast. As it stands, [HR 4] may already be too late to affect next year’s federal elections. States are beginning to redraw congressional districts based on new census data. And one analysis projects the GOP gaining up to 13 seats and thus retaking the House based on gerrymandering alone. The deadline for redistricting varies from state to state, so there’s still a narrow window of time to pass [ HR 4] … But even if the bill were to become law, it’s not clear whether the Justice Department would be able to spin up its preclearance procedures quickly enough to allow for final maps to be drawn ahead of next year’s primary elections…”

So, there you have it. It isn’t “clear” whether the DOJ would be able to act quickly enough to control the entire redistricting process ahead of the 2022 elections. At least the author is being honest, something House Democrats are not. There’s not a single mention of the cynical “protect our House seats” provisions in any of the Democrats’ messaging about HR 4.

Then, there is the boy-did-he-get-played West Virginia Democratic Sen. Joe Manchin. Earlier this year, Manchin held his ground on the Senate filibuster and opposed Senate Bill 1, the original bill containing the Democrats’ federal takeover of the nation’s elections.

To demonstrate his willingness to support a different approach in voting legislation, Manchin issued principles he hoped to see included in a new HR 4 bill: protect voter ID, no federal takeover of the elections, removal of “consent decrees” as basis for pre-clearance, establish clear standards for coverage and relief, among others.

Which of those principles found their way into HR 4 current version? None. Not one. HR 4 prohibits enforcement of voter ID laws, makes the U.S. attorney general the Master Election Czar of the country, and expands the types of proceedings that will be considered as markers against a state or locality to include not only consent decrees but other legal proceedings instituted by the leftist legal industry.

What happens next with Manchin—and, for that matter, Alaska Republican Sen. Lisa Murkowski, who joined Manchin in May to call for reinstating the preclearance scheme struck down by the U.S. Supreme Court in 2013? The HR 4 Democrats introduced and pushed through the House in a week’s time contains none of the provisions that Manchin deemed essential and includes far worse attacks on fair elections than even Murkowski could have imagined.

The bill is a radical leftwing assault on the integrity of America’s elections and would permanently reshape and dictate ultimate election outcomes for the rest of our lives. As Speaker Nancy Pelosi, D-California, was forcing the adoption of the rules to allow the passage of HR 4 and the atrocious spending and budget bills, she told her caucus: “We cannot squander this majority and this Democratic White House by not passing what we need to do…[r]ight now, we have an opportunity to pass something so substantial for our country, so transformative we haven’t seen anything like it.”

She is right. We as Americans haven’t seen anything like it.

Thomas Jefferson famously warned that “[g]reat innovations should not be forced on slender majorities.” HR 4 is a radical “innovation” crammed down the throats of the American people with a margin of four votes, all from one political party.

HR 4 indeed is transformative: it eradicates the precious American principle of free and fair elections, imposing a permanent ruling class of tyrannical left-wing elites, forever beyond the reach of the American voters. Stopping HR 4 in the Senate becomes the existential effort of our time. Get out the prayer beads.