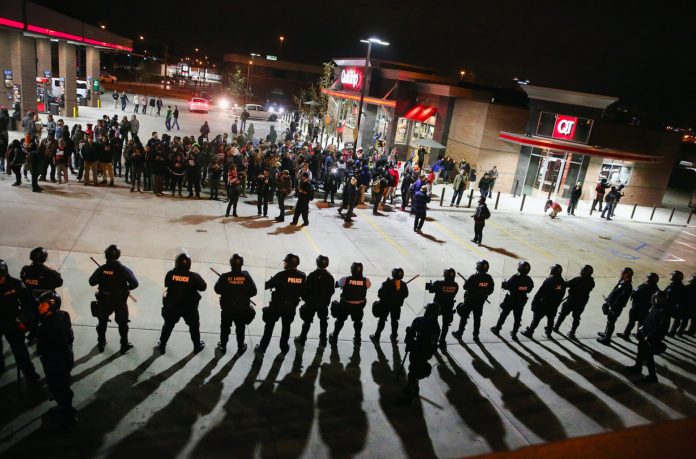 One of the offshoots of the protests and riots that have erupted in most American cities over the past few days has been a growing call on the left to defund law enforcement and end policing. Search Twitter for the hashtag #DefundPolice and you’ll see thousands of people urging an end to law enforcement as a radical, yet necessary step to eliminate injustices perpetrated by police officers.

Getting a lot of replies tonight about the demand to Defund Police, police abolition, etc. 1st I’d say that “Defund Police” is not *my* demand, but it is the demand emanating from the Black-led organizers who have been doing this work for years right now in this moment. (thread)

This campaign raises several serious questions, starting with “Haven’t the past few nights given us evidence of what would likely happen if law enforcement simply disappeared?”

So what about “crime” – well to deal with crime, it is also clear that you have to deal with inequality in society. Reparations, social spending, UBI, universal free healthcare, universal free education. The root of crime is poverty, inequity, racism and policing itself.

Unfortunately for the Defund Police movement, the economic damage done by the coronavirus lock down (compounded by the damage in many cities by looters and rioters) is going to make it economically unfeasible to offer up “free” healthcare, college education, universal basic income, and the other pricey programs that supporters believe would end crime and make law enforcement irrelevant (even if the American public were to vote in politicians who would attempt to implement this agenda). The Defund Police movement might be happy to learn, however, that the same economic damage is also likely to lead to budget reductions for governments across the board, including first responders. We’re likely going to see fewer uniformed police officers this time next year, along with fewer firefighters, EMTs, and paramedics, whether we like it or not.

I can’t help but wonder, however, how many of the same folks that are calling for an end to policing are also big believers in the idea that we need all kinds of new gun control laws. Joe Biden’s gun control agenda would not only not defund law enforcement, it would dramatically expand the number of federal felony gun laws on the books and lead to even more police power.

Making the most commonly sold and possessed rifle in the United States illegal will likely lead to millions of Americans breaking the law by maintaining possession of the guns they already own. How will Biden enforce his gun ban without law enforcement?

Again, how do you even attempt to enforce a universal background check law on private transfers of firearms without police getting involved?

Incentivize state “extreme risk” laws. Extreme risk laws, also called “red flag” laws, enable family members or law enforcement officials to temporarily remove an individual’s access to firearms when that individual is in crisis and poses a danger to themselves or others. Biden will incentivize the adoption of these laws by giving states funds to implement them. And, he’ll direct the U.S. Department of Justice to issue best practices and offer technical assistance to states interested in enacting an extreme risk law.

It’s going to be awfully tough to enable law enforcement officers to “temporarily remove an individual’s access to firearms” when there’s no more law enforcement, isn’t it?

Give states incentives to set up gun licensing programs. Biden will enact legislation to give states and local governments grants to require individuals to obtain a license prior to purchasing a gun.

If police have been defunded, who’s going to be responsible for ensuring that the only gun owners are those who’ve been licensed by the state?

Biden even has an entire section of his campaign plank on gun control devoted to “empowering” law enforcement, not defunding it.

That doesn’t sound very defund-y to me.

Joe Biden and many of his fellow Democrats have been all in favor of expanding police power in order to enforce their anti-gun agenda, even when it results in thousands of young black men going to prison and having felony records for simply possessing a firearm without a license. In Virginia, Democrats in control of the state legislature this year ignored a proposal that would have empowered cities to reduce violence in high crime neighborhoods by focusing on the most violent offenders. Instead, they rallied behind Gov. Ralph Northam’s gun control agenda and the expanded authority for law enforcement that goes along with it.

I expect that Joe Biden and other Democrats are going to try to have it both ways. They’ll talk up the need for a dramatic overhaul of the criminal justice system, but they won’t overhaul their own policies that expand police power and allow for discriminatory licensing laws and other policies that not only have a chilling effect on the exercise of a constitutionally-protected right, but fail to reduce crime as well. In the end, they’ll choose the gun bans and other restrictions on our Second Amendment rights over the demands to ban police. If given the chance, they’ll likely curb the ability of law enforcement to respond to riots that threaten the safety and security of American citizens even as they embolden police to lock up those who may try to protect themselves and their families with a firearm.

This will be our left doing exactly the same here. Watching the protest in Auckland and listening to excuses for their breaking the lockdown laws. David Seymour was right. These protests make a mockery of the sacrifice made by small business and their employees, being unable to open.

Previous articleHave Your Say
Next articleThe Death Of Scientific Method

Prince Harry: ‘Trump Supporters Planning To Assassinate Me and Meghan’ Prince Harry has warned that Trump supporters want to assassinate him, his wife Meghan and...
Read more
Freedom of Speech