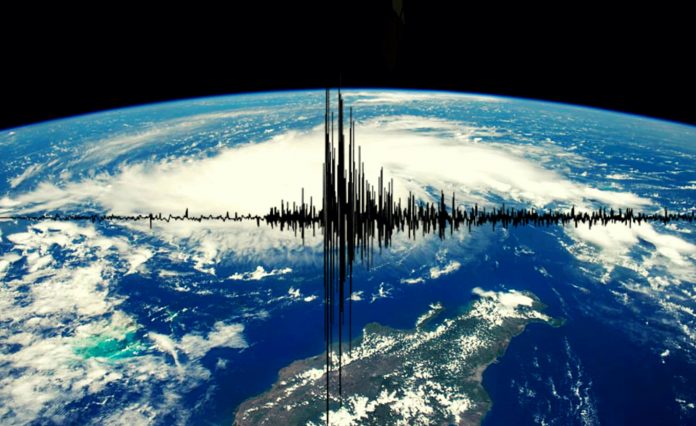 Every 26 seconds for the last 60 years seismologists have detected a ubiquitous pulse emanating from deep inside the Earth.

Every 26 seconds for the last 60 years seismologists have detected a ubiquitous pulse emanating from deep inside the Earth. The debate over the cause of this mysterious “microseism” has gone on for decades and produced several cogent hypotheses, but scientists still don’t know decisively what’s behind the phenomenon.

First observed and recorded by geologist Jack Oliver in the early 1960s, then studied more extensively in the following decades, the pulse is known to be stronger during storms. But storms don’t turn off and on every 26 seconds, nor do volcanos, which have also been proposed as the source.

In 2005, a graduate student named Greg Bensen tracked the origin of the pulse to a more narrow location, a single source in the Gulf of Guinea, off the western coast of Africa; six years later, another team honed in even closer, pinpointing the origin in an area of the Gulf of Guinea called the Bight of Bonny.

This team believed the waves crashing on that coast were responsible for the seismic blip. Others, however, weren’t convinced. Some believed it was caused by the sun itself. While tectonic activity, earthquakes, and volcanos regularly trigger solid seismic sounds, a more mellow soundscape of seismic static runs in near perpetuity.

Mike Ritzwoller, a seismologist at the University of Colorado, Boulder, who has studied the pulse for decades, says that while the pulse is a mystery, seismic activity, in general, is not.

“Seismic noise basically exists because of the sun,” whose energy hits the equator and the poles unevenly, creating wind, storms, ocean currents, and waves, all of which work to displace and buffet energy onto the coastline.

“It’s like if you were tapping on your desk. It deforms the area near your knuckle, but then it’s being transmitted across the whole table,” Ritzwoller explains. “So someone sitting at the other side of the table, if they put their hand, or maybe their cheek, on the table, they can feel the vibration.”

With the advent more advanced tools and technologies, scientists have been able to study the pulse more closely and most generally agree that the Bight of Bonny is ground zero for whatever is happening. Currently, many researchers are beginning to think the cause may be that this specific place on the edge of the enormous North American continental shelf (far below the ocean floor) is basically the other end of the desk Ritzwoller used as a metaphor. In other words, a drum the size of a continent is somehow consolidating its reverberations into a single spot.

Some researchers still believe volcanism is the answer and point to an active volcano on the island of São Tomé in the Bight of Bonny as evidence.

Why any of these physical phenomena would produce such a strange clockwork pulse every 26 seconds remains a mystery.

“We’re still waiting for the fundamental explanation of the cause of this phenomenon,” Ritzwoller says with a beat of optimism about the next decades of seismology. “I think the point [of all this] is there are very interesting, fundamental phenomena in the earth that are known to exist out there and remain secret.”

Previous articleEnjoying our nice country
Next articleHave Your Say