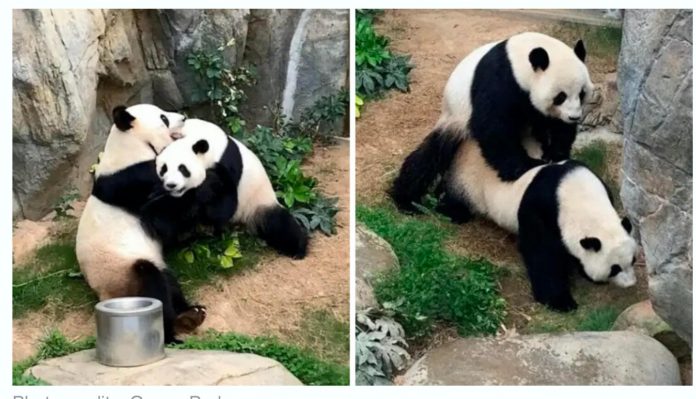 With Zoo Closed Due to Coronavirus, Pandas Finally Bang for the First Time in 10 Years

Zoo officials are hoping that the encounter will lead to a pregnancy.

Ocean Park Zoo in Hong Kong has been closed due to the coronavirus pandemic, but two pandas in the zoo have made the most of the recent privacy and have mated for the first time in captivity, after a decade of encouragement from their handlers.

The 14-year-old giant pandas, female Ying Ying and male Le Le, were spotted mating on Monday morning, and the zoo posted a statement along with photos of the event.

Zoo officials are hoping that the encounter will lead to a pregnancy, but they won’t know if there will be a child until about 14 to 17 days before birth, and an ultrasound will need to take place to confirm the pregnancy around that time.

In the statement, Michael Boos, Ocean Park’s executive director in zoological operations and conservation, said that the chances of pregnancy through natural mating are much higher than artificial insemination.

“The successful natural mating process today is extremely exciting for all of us, as the chance of pregnancy via natural mating is higher than by artificial insemination. We hope to bear wonderful pregnancy news to Hong Kongers this year and make further contributions to the conservation of this vulnerable species,” Boos said.

It is possible that the zoo being empty could have had something to do with making the animals feel more comfortable, but zoo officials say that the pair had been giving signs that they were ready to mate over the past few weeks.

Sometime last month, Ying Ying began playing in the water in her habitat more often, and Le Le began leaving scent-markings around his habitat and looking for Ying Ying’s scent.

According to the zoo. these types of behaviors are common during mating season.

Pandas have been considered “endangered” by the IUCN Red List of Threatened Species and have recently been reclassified as “vulnerable.”

Previous articleHave Your Say
Next articleElection Still On?

Globalists had to figure out a way to carry out a mass slaughter on a planetary scale without alerting the masses to what they...
Read more
World News