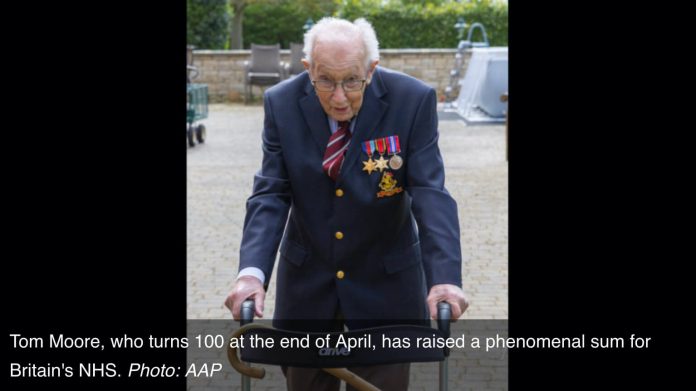 A 99-year-old war veteran has raised more than £10 million ($A19.6 million) for Britain’s health service with a walk around his garden.

Tom Moore started walking laps in his 25-metre garden as part of a humble fundraiser for the National Health Service, hoping to raise about £1000.

He wanted to donate to health care workers at the forefront of the coronavirus pandemic as a way to thank the “magnificent” doctors and nurses who cared for him when he broke his hip.

When Captain Moore’s family used social media to help raise donations, his campaign really took off. By Thursday morning (Australian time), nearly 500,000 people from around the world had donated.

As the money topped the £1 million mark, Captain Moore described it as “almost unbelievable”.

“When you think of who it is all for – all those brave and super doctors and nurses we have got – I think they deserve every penny, and I hope we get some more for them too,” he told the BBC.

Captain Moore, who uses a walker while putting in his paces, does 10 laps of his garden every day – and is well on his way to completing 100 laps by the time he turns 100 on April 30.

He has since said he will push on with a second 100 laps.

His son-in-law Colin Ingram said Mr Moore wanted to give something back after being tended to by the state-run NHS when he broke his hip two years ago and in subsequent hospital visits.

“It was literally just something we were doing in the garden to keep him walking on his recovery from his hip operation,” Mr Ingram told Reuters of how it started.

“We said we’d give him a pound a lap, and thank goodness I didn’t say I’d match any money he raised!”

NHS Charities Together, which will benefit from the money, said it was “truly inspired and humbled”.

Raising money for the NHS has given Mr Moore a new lease of life, said his son-in-law.

“He’s coming down in the morning sprightly and loving it. If the public wants to keep on donating then he’ll keep on walking,” Mr Ingram said.

Britain remains in a strict lock down to try to curb the spread of the coronavirus.

The country had 761 more deaths overnight on Thursday, bringing its total toll to more than 13,000. That does not include deaths in care homes and in the community.

Previous articleHave Your Say
Next articleDo Our Politicians Know this?