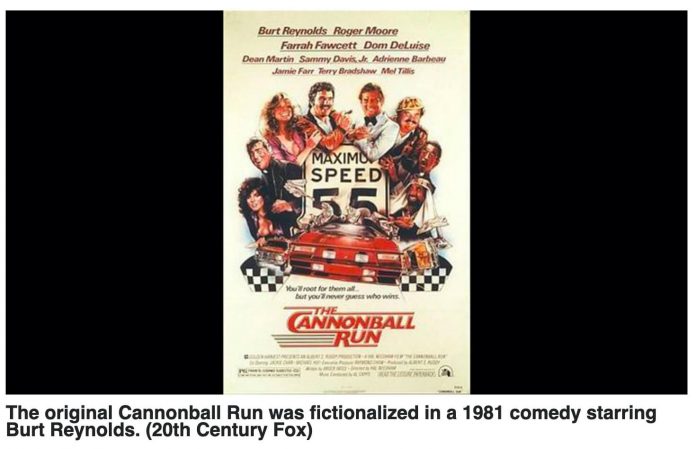 A team of scofflaws has apparently taken advantage of the dramatic reduction in traffic across America due to the coronavirus pandemic to set a new coast-to-coast driving record.

According to Ed Bolian, who set a record in 2013 when highway congestion was normal, the Audi A8 completed the “Cannonball Run” from New York to L.A. in 26 hours and 38 minutes, beating the 27 hours 25 minutes mark set last November by Arne Toman and Doug Tabutt.

Traffic analytics company Inrix has reported that congestion is down nearly 50 percent on average in the U.S. due to stay-at-home policies.

Bolian did not reveal the identity of the drivers, but said in a YouTube video that he monitored a live track of the April 4-6 trip online and has seen timing data confirming the time.

The news comes as police across the country report seeing an increase in speeding due to empty roads. On Tuesday morning, a driver was caught on camera wrecking his $750,000 supercar while speeding on a New York City street, then running red lights as he attempted to flee the scene before being arrested and charged with driving under the influence of drugs.

The people involved in the coast-to-coast stunt have not publicly come forward, but a photo of the car that was briefly posted to Facebook by another acquaintance shows that the Audi was fitted with two marine fuel tanks in its trunk to extend its range between fill-ups and tape to obscure its signature taillight design.

“Do I think this is the best use of time while the country is staying in during a pandemic?” Bolian said in an interview with Road & Track “Probably not, but for me to say it’s awful is like a cocaine dealer saying a heroin dealer is awful.”

Bolian was one of several previous record holders and regular competitors in illicit cross-country races — like the C2C Express and 2904 — to suggest the high-speed run was more reckless, inappropriate or simply less worthy than theirs.

“None of these so-called records have any value,” an Instagram story on the “official” Cannonball account said. “We won’t publish them because doing runs in these #covid19 days devalues the difficulty of the exercise. It could end up badly.”

Alex Roy, whose 2006 record was beaten by Bolian and now works as a special operations director for Ford’s Argo AI autonomous car subsidiary, tweeted that “Patriotism = staying off our roads until this is over.”

“If you hit a truck moving medical supplies and people die because of it, that’s on you,” Roy told Road & Track. “People are counting on those trucks moving around right now. It’s not funny.”

Even Car and Driver, where the organizer of the original 1971 Cannonball Run, Brock Yates, was a writer and popularized the cross-country races of that era, published an editorial titled “Cross-Country Cannonball Speed Records Are Dumb” in response to the new record attempt.

The exact route taken by the Audi from New York City’s Red Ball Garage to the Portofino Inn in Redondo Beach has not been revealed, and it is not known if any law enforcement agencies are aware of or investigating the incident. The average speed over the shortest route possible between the two points would be approximately 103 mph.