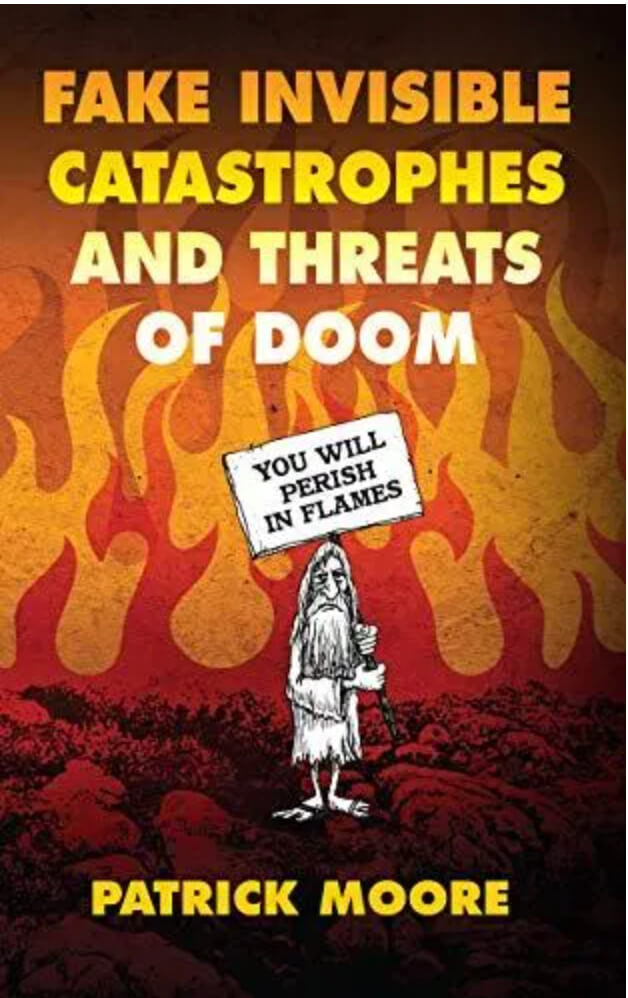 There have been dozens of good books written in the past decade telling the true stories countering the incessant lies of alarmists blaming impending environmental disasters on carbon dioxide emissions.

None have been better than the newest contribution by Patrick Moore and certainly none as up to date as this just published contribution to real science. We all know by now that Patrick co-founded Greenpeace.

It was in an effort to stop underground hydrogen bomb testing and later to save whales and Harp seals. He was still studying for his degree in Ecology at the University of British Columbia (UBC).

Fifteen years later when Greenpeace became a money machine in the war to scare the public with one environmental lie after another, he resigned and became their public enemy number one.

The tipping point was the organization’s initiation of a campaign to ban chlorine, the most important of all 94 natural elements for both public health and medicine.

In many ways, his newest book can be seen as eleven brief books teaching the important facts and research on the major environmental issues of our time.

What sets this outstanding book apart from most is that while Moore is an academic with a Ph.D. in ecology from UBC (which he describes as the study of how all components of our world interrelate and interact), he has a somewhat unique ability to dive into the weeds on each subject and emerge with a basic understanding of each issue for the reader.

While I have read a great deal on all his topics, I was amazed at how much I learned, and you will be too.

He tells us what most of us realize today, that too many if not most activists, “the people are a kind of afterthought to be considered only once the perfect environmental policy has been identified, without regard for how negative the impact is on humanity.”

The push to phase out all fossil fuel consumption in the next 30 years he says, “is the biggest threat to civilization in the world today.”

In this 204-page 11-chapter book, as you would imagine, its longest chapter (49 pages) Climate of Fear and Guilt, is devoted to climate change. Most readers have read numerous arguments against the well-known fraud of human-caused global warming.

You may not want to read another. I can tell you, however, that no one has done it better. This well-illustrated chapter manages to add common sense ways to convince your friends of the absurd effort by our new administration to convince you to give up your freedoms in order to save the world.

He deals with 19 separate crazy predictions laid at the feet of climate change. He skewers them all with excellent technical references.

While it is worth the price of the book, it is the less well-known information in the other chapters that produce a truly outstanding book.

His recounting the story of the Great Barrier Reef, supposedly dying only to learn it was doing just fine, is well known now. The so-called bleaching is the result of one form of plankton leaving the reef, and their color along with them, due to changes in environmental conditions.

For a period, the reefs appear white until a new species of plankton moves in. It is a fascinating tale. Patrick describes it meticulously illustrating that the reef has three distinct segments that respond differently.

You will be amazed how much you will learn about reefs from the author’s first-hand experience with them snorkeling off the coast of Mexico for 20 years at his winter home.

He makes light of the fact that corals evolved and survived for 225 million years when the climate was considerably warmer than now. While the alarmists insist a warmer Earth is detrimental, he explains that the warmest seas, in the Indonesian Archipelago including the Philippines and Solomon Islands, known as the Coral Triangle, are home to the world’s greatest diversity of coral reefs.

By now we know that Polar Bear populations have increased dramatically for over a half-century. Yet few know that an International Treaty signed in 1973 by all polar countries outlawed the unrestricted hunting of these beautiful but deadly animals.

He tells the sad story of the attacks on Dr. Susan Crockford, an internationally renowned polar bear expert, who has been vilified by the left for bringing the truth to the world about the health of the current Polar Bear population.

This undermined the cruel efforts to use the bear as a symbol of human-caused global warming.

Few of us really understand Species Extinction or the level of lies told by the left of the millions of life forms being eliminated from our Earth. To that extent, I can guarantee an eye-opening story by Patrick.

I will however steal some of his thunder by telling you the approximate number of species he tries to address. There are just under two million species on Earth that have been identified, named, and characterized.

You can imagine how absurd it has been for biology alarmists to weave their tales of misery for so many creatures of which they know almost nothing. Believe it or not, they use mathematical models to promote their lies.

Among my favorite chapters is the hoax of the Pacific Garbage Patch. It is said to be full of discarded plastic and twice the size of Texas.

In fact, it is all made up of photo-shopped pictures and others taken from different events like the garbage that washed offshore after the tsunami at Fukushima. Perhaps more than any story it tells the lengths to which these evil people will go to undermine society as we know it.

There is an anti-plastic movement among them, and plastics come from petroleum, so they see it as an easy case to make. Moore foils it while at the same time clearly indicating where discarded plastic has endangered wildlife and fish and should be stopped.

There is no single cause in the book where Patrick does not equally expose the alarmist lies while simultaneously teaching good environmental stewardship.

While the world’s food supply has continued to increase and reduce all forms of starvation, this has occurred in spite of the left’s efforts to eliminate advanced technology in agriculture.

Genetic modification has allowed huge improvements in our food production. We can grow crops under high heat and low moisture as a result. We have increased yields for many of our important grains.

All of this however has been achieved against a backdrop of decades of anti-GMO forces spreading lies to the public regarding the lack of safety of such improvements.

The most dramatic case that Patrick describes in detail is the decades-long effort to thwart the reduction in childhood blindness through the use of ”Golden Rice”.

This genetically modified rice contains beta carotene, a precursor to vitamin “A” whose deficiency brings on blindness among children. Patrick tells a story that will incense the reader more than ever toward the evildoers with whom we do daily combat.

Patrick correctly states in frustration “the fact is that after 25 years of genetically modified organisms of many types being grown and eaten around the world in billions of meals there has not been a single verified case of harm. But that does not seem to deter the doomsayers.”

His detailing of their lies will make you want to convince your friends of the truth about GMOs.

Patrick does an equally accurate job of dispelling the myths of Nuclear Radiation which this writer did in 23 network TV shows following the Fukushima tsunami. It wrecked 4 nuclear power plants without causing any illness from exposure to radiation.

As a forester by training Patrick toys with the absurd claims directed at forest fires in his chapter titled Forest Fires: Of Course They are Caused by Climate Change (Not Trees).

In sum, I cannot recommend this book too highly. I have had the good fortune to sit with Patrick and chat for long periods of time. Reading his book, with his easy manner of placing words on paper will offer you a similar experience.

Fake Invisible Catastrophes and Threats of Doom, by Patrick Moore. Buy it now!