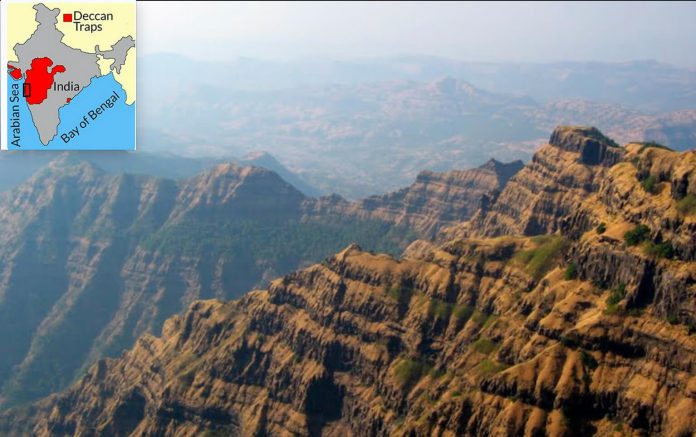 Scientists have new evidence in their quest to settle the longstanding debate about whether it was a gigantic meteorite or massive volcanic eruptions that triggered the mass extinction that wiped out the dinosaurs.

A curious thing about the Cretaceous-Paleogene (K-Pg) mass extinction is that two apocalyptic-scale events happened at roughly the same time. Some 66 million years ago, a large meteorite slammed into what is now the Yucatan Peninsula, creating the 200-kilometre-wide Chicxulub impact crater. On the other side of the world, in what is now India, the volcanic Deccan Traps were going berserk, spewing 500,000 cubic kilometres of lava onto the land and into the ocean, in a protracted eruption that lasted for tens of thousands of years.

Needless to say, both of these events had a profound effect on Earth’s climate, leading to a debate among scientists as to which of the two catastrophes led to the demise of the dinosaurs.

New research published today in Science suggests it was the space rock, and not extreme volcanism, that triggered the end-Cretaceous mass extinction. This research, co-led by geologist Pincelli Hull from Yale University, offers new evidence showing that volcanic greenhouse gasses, namely carbon dioxide and sulphur dioxide, most certainly had a planetary-scale impact, but not enough to wipe out the dinosaurs.

“A lot of people have speculated that volcanoes mattered to K-Pg, and we’re saying, ‘No, they didn’t,’” said Hull in a press release.

These papers were largely complementary, “but there was one significant disagreement between the studies regarding the output of lava right around the Cretaceous, with implications for the interpreted role of the Deccan Traps in the mass extinction,” Courtney Sprain, assistant professor at the University of Florida and a co-author of one of these two previous papers, said in an email to Gizmodo. These two dating studies left it unclear as to which scenario—the asteroid or the eruptions—led to the mass extinction.

“The significance of this new study is not that the authors are saying something new, but that they present a solution to a previously outstanding problem,” said Sprain, who was not involved in the new work. “Specifically, the authors sought to test which eruption scenario of the Deccan Traps best matches observed environmental changes in the deep ocean, using a unique combination of modelling and data. This is significant because in order to understand the cause of the mass extinction, we have to solve these outstanding controversies.”

Key to the new paper was its focus on the outgassing churned by the Deccan Traps and its effect on the environment. To determine this, Hull and her colleagues ran a series of simulations that helped them determine when these volcanic gasses entered into the atmosphere and their long-term effect on global temperatures. These results were then cross-referenced to paleotemperature records corresponding to the K/Pg extinction event.

Their results showed that the majority of the Deccan Traps greenhouse gasses were released before the meteorite impact—a finding that suggests the collision was not just the primary driver of the mass extinction, but the sole driver.

“I don’t think the cause of the end-Cretaceous mass extinction is a closed book.”

“Volcanic activity in the late Cretaceous caused a gradual global warming event of about two degrees, but not mass extinction,” said Michael Henehan, a co-author of the study and a former Yale researcher, in the press release. “A number of species moved toward the North and South poles but moved back well before the asteroid impact.”

Additionally, an analysis of deep-sea sediments pulled from the North Atlantic, Pacific, and South Atlantic oceans showed that any warming produced by the Deccan volcanism had a negligible effect on marine life and that a general cooling trend had occurred prior to the asteroid strike.

“Overall, I am very impressed with this study,” said Sprain. “The authors put a lot of effort into this study and it shows.”

Sprain said the authors provided “ample evidence” to support their conclusion that the Deccan Traps weren’t a major factor in the mass extinction of marine creatures, and she was “excited” to see that their paper supported her own team’s eruption model.

“However, I don’t think the cause of the end-Cretaceous mass extinction is a closed book,” said Sprain. “For one, there are still uncertainties in the carbon cycle model used in this study, in addition to uncertainties in the inputs used in models, such as the amount of CO2 released by the Deccan Traps, that need to be considered.”

What’s more, she said there’s still evidence pointing to Deccan volcanism as a contributing factor in the extinction of terrestrial species.

“So while I think this study made a significant step forward, there is still a lot of work that needs to be done to assess the role of the Deccan Traps in the K-Pg mass extinction,” said Sprain.

Interestingly, the new study also modelled the environmental effects of the Deccan Traps on the period that followed the meteorite strike. Oddly, no evidence exists to suggest Earth experienced a warming period as a result of these greenhouse gases. The new paper offers a plausible solution: These gases fundamentally altered the planet’s carbon cycle, which in turn caused the oceans to suck in tremendous amounts of CO2. This had the effect of “hiding the warming effects of volcanism in the aftermath of the event,” said Donald Penman, a co-author of the study and a postdoctoral associate at Yale University, in the press release.

Consequently, the Deccan Traps likely contributed to the evolution of the animals that appeared in the aftermath, according to the research.

As Sprain’s comments suggest, this new paper won’t resolve the debate as to which event was more calamitous to life on Earth. Clearly, both the asteroid and the volcanoes had a tremendous impact. Future research will hopefully continue to disentangle the roles played by each of them.