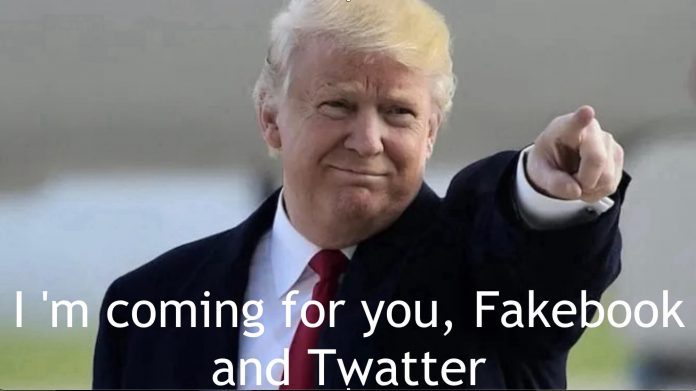 Over the past few months, rumors have circulated about Donald Trump’s new “free speech” social media network after Big Tech unanimously banned him from their platforms earlier this year.

According to new reports, Trump is moving ahead with the plan to create his own social media platform that will cater to all.

Insiders working with Trump have confirmed that the former President has already secured “hundreds of millions” in backing for his social media venture, with some of that money coming from Silicon Valley insiders who hate censorship and cancel culture.

Washingtonexaminer.com reports: Details emerged as Trump began a new phase of his post-presidency, giving television interviews from his Florida base in the week after his Senate impeachment acquittal.

On Wednesday, he boasted about the millions of people who followed him on his now-shuttered Twitter and Facebook accounts and confirmed that he had considered buying a social media company.

“We’re negotiating with a number of people,” he told Newsmax TV. “There is also the option of building your own site because we have more people than anybody, so you can literally build your own site. But we were being really harassed on Twitter. They were putting up all sorts of flags, I guess they call them, they were flagging almost anything you said.”

Trump was banned from several social media platforms in the aftermath of the attack on the Capitol by some of his supporters. Twitter, of which Trump was a prolific user, said the president’s tweets posed the risk of further violence.

At the time, Trump said: “We have been negotiating with various other sites, and will have a big announcement soon, while we also look at the possibilities of building out our own platform in the near future.”

Since leaving office, he has split his time between his home at the Mar-a-Lago club in Palm Beach and his nearby golf course while gradually building a new political operation.

Visitors have included House Minority Leader Kevin McCarthy as well as his second-in-command, Rep. Steve Scalise, according to reports. His new website and email mailing list were put together by Nucleus, a digital campaign firm run by Brad Parscale, who was Trump’s 2020 campaign manager until he was replaced in July last year.

Two sources familiar with discussions said Trump had also met with potential investors in a new online venture designed to allow the former president to engage with his supporters and protect them from being taken offline.

“They aren’t the people you might expect,” he said.

With impeachment out of the way on Saturday, this week triggered a new phase in Trump’s life after the White House. On Tuesday, he launched a blistering attack on his one-time loyal Senate lieutenant Sen. Mitch McConnell, calling him a “political hack” and threatening to back rival primary candidates.

A day later, he dialed into three television interviews to pay tribute to conservative talk show host Rush Limbaugh, who died on Wednesday, as well as to reheat his claims that the election was stolen from him.

Chairman of the American Conservative Union Matt Schlapp said it was impossible for Twitter, Facebook, and other tech giants to keep Trump out of politics. His TV appearances marked a welcome return for the 74 million people who voted for him in November, he said.

“There’s a real despondent feeling among those people,” he said. “And many were buoyed to hear the former president. We never had a president get silenced before. It’s never happened.”

A spokesman for Trump did not respond to requests for comment.

In the meantime, many of his supporters have migrated to messaging sites, such as Telegram, or other microblogging sites such as Parler, which was itself taken offline last month by its host Amazon Web Services over a pattern of hateful posts. It later emerged that Parler had been in talks with the Trump Organization last year, offering a 40% stake if he made the no-holds-barred platform his online home, according to Buzzfeed News.

Gab, a social media platform popular with Trump supporters, is even keeping a seat, or at least a handle, warm for the former president.

“@realdonaldtrump is and always has been a mirror archive of POTUS’ tweets and statements that we’ve run for years,” wrote chief executive Andrew Torba in a recent post on the platform. “We’ve always been transparent about this and would obviously let people know if the president starts using it.”

Previous articleGates-Funded Organisation: ‘Math Is Racist’
Next articleHave Your Say