You Stupid Boy
Home Freedom of Speech No Freedom to speak

No Freedom to speak 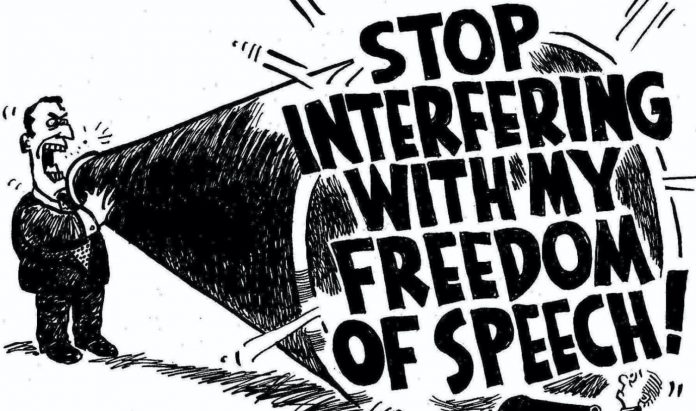 He also noted that some Muslims in Britain were creating a nation within a nation and had no patriotic regard for the British state as it is currently constituted.

What did Phillips say that was false?

It doesn’t matter. Labour, and the British intelligentsia as a whole, is at war with reality. Britain has gone insane, and its demise as a free society is well underway.

“Labour’s race vendetta: Equality champion Trevor Phillips claims he was suspended from party for ‘Islamophobia’ as ‘Corbynista payback’ for his criticism of its handling of anti-Semitism crisis,” by James Tapsfield and Zak Newland, Mailonline, March 9, 2020:

Former equalities watchdog Trevor Phillips today blamed ‘gangsterism’ and ‘Corbynista payback’ after he was suspended from Labour over allegations of Islamophobia.

The anti-racism campaigner, who previously chaired the Equality and Human Rights Commission, faces an investigation and could be expelled from the party.

He was among a group of 24 public figures who last year declared their refusal to vote for the Labour Party because of its association with anti-Semitism.

However, Mr Phillips revealed he is now being investigated over past comments, some of which date back years, including remarks on Pakistani Muslim men sexually abusing children in northern British towns.

Comments about the failure of some Muslims to wear poppies for Remembrance Sunday are also thought to be under scrutiny.

Other remarks refer to the sympathy shown by some in an opinion poll towards the motives of the Charlie Hebdo attackers.

However, Mr Phillips today mounted a robust defence. Speaking on BBC Radio 4’s Today programme, he said: ‘I’m surprised about what is and always has been an open and democratic party decides that its members cannot have healthy debate about how we address differences of values and outlooks.

He is also accused of engaging in conduct that ‘may reasonably be seen to demonstrate hostility or prejudice based on race, religion or belief’, involved ‘Islamophobic actions, stereotypes and sentiments’, and ‘undermines the party’s ability to campaign against racism’.

In a 2016 pamphlet, Mr Phillips wrote: ‘The most sensitive cause of conflict in recent years has been the collision between majority norms and the behaviours of some Muslim groups.

‘In particular, the exposure of systematic and longstanding abuse by men, mostly of Pakistani Muslim origin in the north of England.’

Mr Phillips describe a visit to an industrial site where many African and eastern European immigrants worked but noticed a marked difference in those who were planning to mark Remembrance Sunday.

He wrote: ‘Poppies were everywhere. One group had clearly adapted to the mainstream, the other had not.’

‘Nation within a nation’

In 2016 Mr Phillips was quoted in a Times story on a survey of values, referring to ‘the unacknowledged creation of a nation within the nation, with its own geography, its own values and its own very separate future’.

‘Let us be clear about this. They say I’m accusing Muslims of being different.

‘Well, actually, that’s true. Muslims are different and, in many ways, I think that’s admirable.’…

Lets hope that Cindy doesn’t see this and get her pet plod force to do the same here.

Any comment, no matter how truthful it might be, is now fair game for them. Any reason to shut us down will be leapt upon by these idiots.

Previous articleRacism Alive In the EU
Next articleHave your Say