No more bullshit, protests have started.

Thousands of anti-coronavirus protesters have taken to the streets in a number of countries to oppose pandemic restrictions and question the truth of the virus.

Berlin police disbanded a mass protest in the German capital against coronavirus curbs after marchers failed to keep their distance and wear masks as instructed.

The protest came as infections rise across Europe and as public frustration at measures to contain the virus grows in some quarters.

Similar events took place in Paris, London and elsewhere on Saturday, drawing crowds in the hundreds.

The London crowd gathered in Trafalgar Square calling for the end of what they called “COVID hoax” measures.

“Unfortunately, we have no other option,” Berlin police said on Twitter, adding people had failed to comply with the safety conditions of the march.

Protesters were dispersing peacefully although there were some pockets of disturbance, such as a construction container fire and blocked roads, police said.

About 3000 officers had been deployed to control crowds estimated at 18,000.

Police had been preparing for possible violence as activists opposed to measures to contain the virus urged social media followers across Europe to arm themselves and gather in Berlin.

Earlier this week the city banned the protest but a German regional court overnight gave the final go-ahead by overruling the earlier decision.

Until now Germany has managed the coronavirus crisis better than many of its European counterparts, with rigorous testing helping to hold down infections and deaths.

But new daily infections have accelerated in recent weeks, as in much of the world. 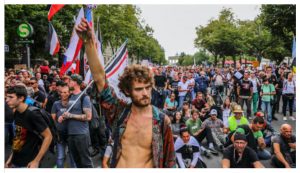 Previous articleIn case you missed it. How Tarrant did what he did.
Next articleHave Your Say