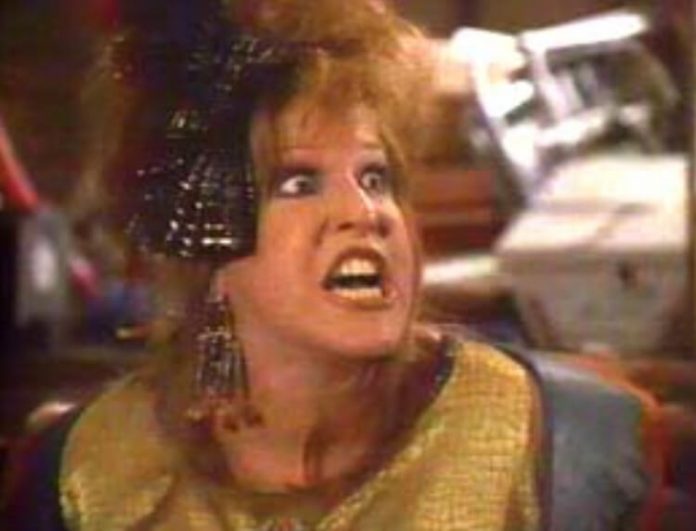 Hollywood actress Bette Midler has viciously lashed out at Kayleigh McEnany, telling the White House Press Secretary to “go fuck herself” after McEnany tweeted news about the Wayne County Board of Canvassers’ decision to not certify their portion of the Michigan vote in the presidential election.

“With all due respect, Kayleigh, go fuck yourself. IMHO, Harvard has a lot to answer for,” Midler wrote. 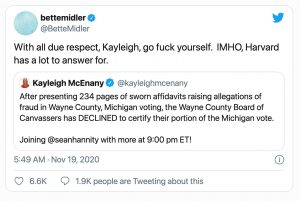 Breitbart.com reports: The Wayne County Board of Canvassers initially declined to certify its portion of the Michigan vote in a 2-2 deadlock decision after receiving more than 200 sworn affidavits alleging fraud in the county.

But in a surprise reversal late Tuesday, the board unanimously voted to certify the count while also demanding that Michigan Secretary of State Jocelyn Benson conduct a “comprehensive audit.” The stunning reversal is itself drawing scrutiny after video emerged showing a Democratic state Representative-elect appearing to dox the children of the Republican chairwoman of the Wayne County Board of Canvassers on a public Zoom meeting. 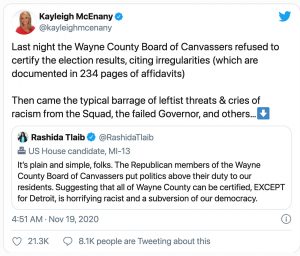 In the video, Democrat Abraham Aiyash accused chairwoman Monica Palmer of enabling and perpetuating “the racist history of this country.” He seemed to try to dox her children, suggesting that they attend a certain elementary school.

Kayleigh McEnany has also weighed in on the Wayne County reversal, noting that board members changed their decision after being smeared as racists by Democrats.

Previous articleHave Your Say
Next articleUse Parler for your social media