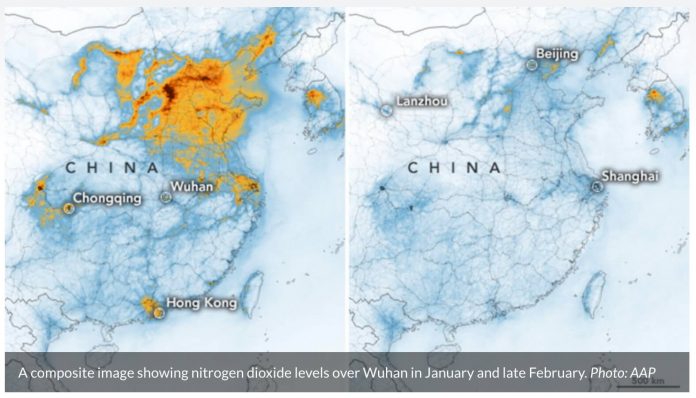 Satellite images have shown a dramatic decline in pollution levels over China, which is “at least partly” due to the crippling economic slowdown following the outbreak of the new coronavirus, NASA says.

NASA scientists said the reduction in nitrogen dioxide levels was first apparent near Wuhan, where the COVID-19 outbreak began. It then spread across the country.

The US space agency noted the decline coincided with transport and business restrictions, and as millions of people went into quarantine.

“This is the first time I have seen such a dramatic drop-off over such a wide area for a specific event,” Fei Liu, an air quality researcher at NASA, said.

The NASA pictures came as a private survey showed China’s factories were dealt a devastating blow in February as the coronavirus epidemic triggered the sharpest contraction in business activity on record.

The Caixin/Markit Manufacturing Purchasing Managers’ Index tumbled to 40.3 in February, the lowest level since the survey began in 2004.

The headline number was even worse than the depths of the financial crisis in 2008-09.

The PMI findings were backed by an equally grim official survey released on Saturday, which showed the steepest contraction on record.

The survey showed factory production and new orders collapsing to the worst levels on record, while employment also took a heavy blow. There was no respite for exporters either, with new export orders sinking at one of the sharpest rates in the series history.

China’s Lunar New Year celebrations in February have been linked to such decreases in pollution levels in the past. Levels normally rebound once the celebrations are over.

“This year, the reduction rate is more significant than in past years and it has lasted longer,” Dr Liu said.

“I am not surprised because many cities nationwide have taken measures to minimise spread of the virus.”

China has recorded 79,826 cases of the novel coronavirus since the outbreak began in December and 3038 people have died from COVID-19 worldwide, most of them in China.

The disease is spreading rapidly around the globe, with more than 60 countries now confirming infections.

In response to signs of the deepening economic damage, Beijing has rolled out a support measures to help businesses stay afloat.

But in the short run, analysts expect the epidemic to deal a sharp blow to growth. Many are forecasting a severe downturn in the first quarter.