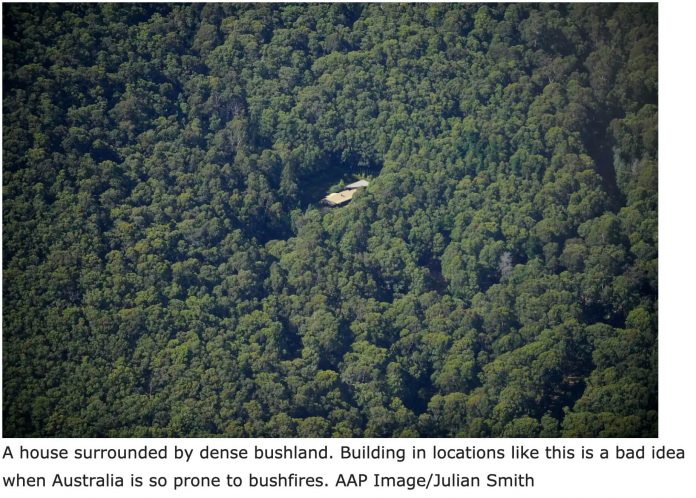 The NSW bushfire inquiry found property loss is ‘inevitable’. We must stop building homes in such fire-prone areas

But clearing and burning vegetation will hurt our native flora and fauna, which is still recovering from the fires. Rather than clearing land to reduce the bushfire risk, we must accept we live on a fire-prone continent and improve our urban planning.

Importantly, with fires set to become more frequent and severe under climate change, we must stop choosing to live in bushland and other high-risk areas.

The bushfire inquiry was conducted over six months, with former Deputy Commissioner of NSW Police Dave Owens and former NSW Chief Scientist and engineering professor Mary O’Kane at the helm.

It found changes are needed to improve the preparedness and resilience of local commmunities, as well as fire-fighting techniques, such as use and availability of equipment. And it noted prescribed burning should target areas such as ridge tops and windy slopes. These are areas that drive fires towards towns.

But a key finding was that there’s still a lot to learn, particularly about bushfire suppression methods. As a result, future property losses are “inevitable”, given settlement patterns and “legacy development issues”.

What risk are we prepared to accept?

If we as a community accept that property loss will occur, we should choose the level of risk we’re prepared to take on and how that will affect our environment.

Building homes in high bushfire risk areas requires a combination of land clearing to reduce flammable material such as dry vegetation, and ensuring your home has a fire-resilient design.

But after the unprecedented megafires of last summer, it’s clear living in these areas still exposes residents and firefighters to high risk while trying to protect buildings and the community.

Bushfire prone areas are often on the periphery of cities and towns, such as Sutherland in the south of Sydney, coastal areas such as the South Coast and Central Coast, or remote communities including Wytaliba in northern NSW. These areas contain a mix of medium to low density housing, and are typically close to heavy vegetation, often combined with steep slopes.

But we should not continue to develop into these high risk areas, as the associated land clearing is too significant to our ecosystems and may still result in houses being lost.

It’s estimated more than 800 million animals were killed in the NSW bushfires, and more than one billion killed nationally.

The clearing of native vegetation is recognised as a major threat to biological diversity: it destroys habitats, can lead to local wildlife populations becoming fragmented, and increases the exposure to feral predators such as cats and foxes.

In 2018 around 60,800 hectares of woody vegetation was cleared in NSW for agriculture, infrastructure and forestry. This is an increase of 2,800 hectares from the year before.

If we continue to build in high risk areas and clear trees to create asset protection zones, we will add to the ongoing pressure on wildlife.

Where should we build?

Rather than trying to modify the environment by clearing trees, we must plan better to avoid high risk bushfire areas. This was reinforced in the inquiry report, which called for a more strategic approach to where we locate new developments.

And this focus on planning is reflected in recent policy changes by the NSW Rural Fire Service, Planning Institute of Australia and Australian Institute for Disaster Resilience that encourage resilient communities. For example, the state’s rural fire service’s 2019 guidelines, Planning for Bushfire Protection, place more emphasis on considering bushfire at the rezoning stage to reduce risk to future developments.

We should encourage our communities to grow in low-risk areas away from native vegetation. This includes avoiding the development of new low-density housing in rural and remote locations.

To further separate our homes from risk, we should also consider instead putting non-residential land — such as for industrial factories and manufacturing plants — closest to vegetation.

Rural houses should be built in more urban settings near existing towns away from dense vegetation, rather than scattered buildings. In larger towns and cities we could focus on brownfield development with little ecological value. “Brownfield” refers to sites that have previously had development on them.

And community buildings such as hospitals, education and emergency services, should be placed in low-risk areas to facilitate response during and after a bushfire event.

While each community should decide how it develops, land rezoning and planning rules should not allow continued expansion into high bushfire risk areas.

A large mural of climate activist Greta Thunberg in Dublin has been vandalised a little over 24 hours after it was finished. The work,...
Read more
Climate Change Bullshit

Why The Texas Blackout Has The Greens So Scared. By Rael Jean Isaac. cold wave so severe that five million people lost electricity and, in a...
Read more
Climate Change Bullshit