You Stupid Boy
Home World News No TDS In India

No TDS In India 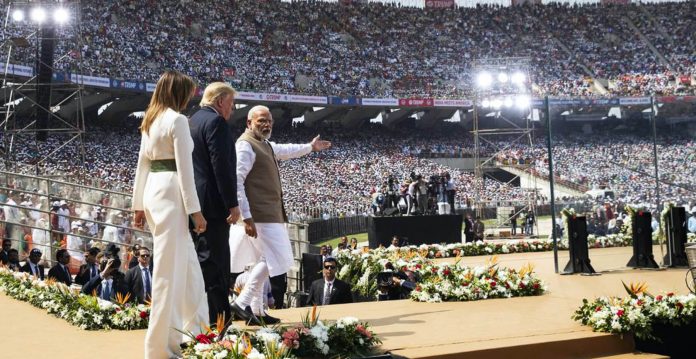 The routine attacks on Trump from “progressives” and “Islamophobia” pushers: he’s a “bigot,” he’s a “racist,” etc. The establishment media generally fans the flames of these us versus them mantras, framing Trump’s supporters and his opponents as “white supremacists” versus people of colour. Meanwhile, in Canada, Prime Minister “blackface“ Justin Trudeau bends over backwards to advance “diversity” without restraint. The contrasts between Trump and Trudeau couldn’t be more stark. That was also clear in how both were received as guests in India.

Let’s begin by considering the so-called “racist” Trump’s welcoming reception at the largest Hispanic Church in America, and then his warm reception in India.

In early January, Trump launched his 2020 campaign’s “Evangelicals for Trump” coalition at the largest Hispanic Church in the country, King Jesus International Ministry, a 100,000-square-foot megachurch in Miami, with room for 7,000 attendees. The church welcomes 15,000 to 20,000 people every week. Yet most media portray Trump as an enemy of Hispanics.

Now for India. Trump was greeted like royalty with pomp and ceremony the minute he exited his plane. Neither this Hispanic Church nor India would welcome an actual “white supremacist” with outstretched arms. But they both welcomed Trump enthusiastically. The real racists are the Leftists, who persistently ignore the voices of brown and black people who support Trump. You can see the video posted by Vijeta Uniyal HERE.

Even Politico noted that “India rolls out the MAGA carpet for Trump“:

There were women in elaborate Indian garb dancing, Bollywood stars singing and an eclectic mix of music blaring in time to flashing lights. And when President Donald Trump finally appeared onstage at the world’s largest cricket stadium, the sun-soaked crowd burst into a deafening, rapturous applause.

Trump reiterated his concerns about jihad terror and the need for responsible immigration in his speech to the 110,000 strong, cheering crowd at Motera Stadium in India. Here’s an excerpt….

On behalf of the entire American people, thank you and thank you all for the contributions your culture and traditions have made to my beloved country….

I believe that the United States should be India’s premier defense partner, and that’s the way it’s working out. Together, we will defend our sovereignty, security, and protect a free and open Indo-Pacific region for our children and for many, many generations to come.

The United States and India are also firmly united in our ironclad resolve to defend our citizens from the threat of radical Islamic terrorism. (Applause)

In the United States, we have also made clear that while our country will always welcome newcomers who share our values and love our people, our borders will always be closed to terrorists and terrorism and to any form of extremism.

That is why we have taken historic steps to improve screening and vetting of applications for entry, and we are working to ensure that anyone who threatens the security of our citizens is denied admission and will pay a very, very big, costly price. (Applause.)

Every nation has the right to secure and controlled borders. The United States and India are committed to working together to stop terrorists and to fight their ideology. (Applause.)

Both of our countries have been hurt by the pain and turmoil of terrorism and that terrorism brings. Under my administration, we unleashed the full power of the American military on bloodthirsty killers of ISIS in Iraq and in Syria. (Applause.) Today, the ISIS territorial caliphate has been 100 percent destroyed. And the monster known as al-Baghdadi, the founder and leader of ISIS, is dead.(Applause.)

It is also interesting to note that while Trump was met with diplomatic ceremony, dance and public applause in India, Justin Trudeau on his 2018 visit to India was met with nothing but a “diplomatic dance” of humiliation.

Justin Trudeau is a mascot of everything that is wrong with the world today. From being at the forefront of encouraging every degeneracy to welcoming radicalism into his homeland, from cheap gimmicks of tokenism to attempts at creating a culture of politically correct absurdities, the stink of his leftist hypocrisy wafts far and wide. As citizen of India, I could not care less if the elected leader of Canada seeks to drive his nation to the dumps. But where it has an adverse effect on my country is where I choose to draw the line……

India is not CNN’s studio where global champions of pseudo-liberalism, pseudo-secularism and radical Islamism will find a platform to propagate their hypocrisy and watch the world burn. You might be rich, white, the offspring of royalty and the global poster-boy of liberal values, but it amounts to zilch, especially if you mess with India.

Pushing “diversity” without limits is the formula for “progressives,” and identity politics is a business; Trudeau relentlessly engages in both.

Recall, the race card against Trump was pulled out swiftly upon the announcement of his temporary ban on immigration from several Muslim countries of concern, but the race card cannot be used in India. Attacks by Islamic supremacists and Leftists against Trump were never about race or discrimination to begin with. They were about advancing Islamization and socialism; smearing Trump with these overused labels was an effective way to aid that advance. Trump has repeatedly indicated his concerns about the safety of Americans and the need to control immigration from global trouble-spot countries, most of which happen to be Muslim. Meanwhile, the “progressive” elites are well protected by security, courtesy of taxpayer dollars.

Trudeau has all but abandoned homeland security, and panders to Muslims. He views evangelical Christians as “the worst part of Canadian society,” sets out a “welcome home’ mat for ISIS returnees, funded the “weird,” antisemitic Muslim Voting Guide, and allows Islamic supremacists to run roughshod over Canadians and deem them “fearful” of Muslims, thereby needing the “Islamophobia” police. The list goes on.

Justin Trudeau, not Trump. is really the scary one, and he uses the refrain of “diversity” like a wrecking ball to try to hide it.

Previous articleWhy Are The Left So Stupid?
Next articleBrainless Rich