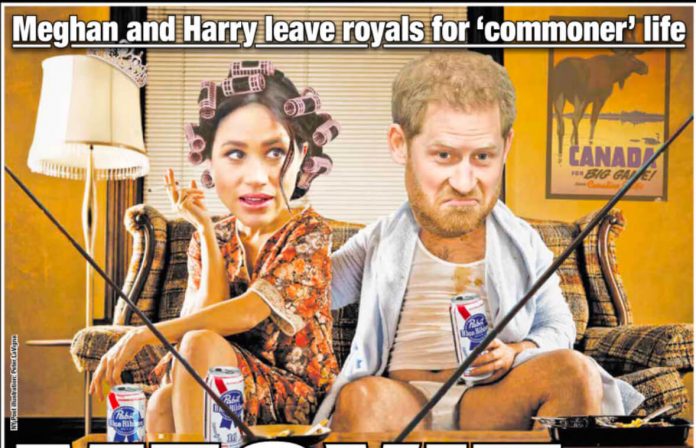 Meghan Markle and Prince Harry face having to ask President Donald Trump for ‘special help‘ if they want Secret Service protection for their new life in Hollywood, as Canadians bid farewell to the troublesome couple and their huge security costs.

Trump will have the ‘final say‘ over whether the couple can have diplomatic protection in the US, because Harry will no longer be classed as an ‘international protected person‘ when he completes the final phase of Megxit next week, according to a royal source.

Given Meghan’s criticism of Trump – and snubbing him at a Buckingham Palace banquet – the president might not feel so generous towards the pair.

Harry has also been disparaging of Trump saying he has ‘blood on his hands‘ during a prank telephone call when he was tricked into thinking he was speaking to teenaged climate activist Greta Thunberg.

DailyMail report: The Duke and Duchess of Sussex and ten-month-old baby Archie made a last minute dash across the border from Canada to the US this week to start their new life in LA.

Questions are now being asked about who will foot the bill for their new Hollywood lifestyles.

The couple caused quite a stir earlier this year when they made the shock announcement that they were quitting Royal life and leaving the UK. 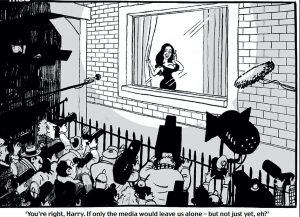 The Megxit process will finally be complete on Tuesday when the couple will stand down as senior Royals.

A royal source said the pair’s stepping down removes any obligation on the US government to pay for their security.

The UK and US have a long standing reciprocal agreement when it comes to bodyguards protecting diplomats and members of the Royal family.

President Trump’s Secret Service agents would have been allowed to carry their weapons on his state visit and likewise bodyguards for the Queen and Prince Charles when they made official trips to the US.

But Harry’s exit from the Royal family means he is no longer considered an ‘international protected person’ and so these rules don’t apply. 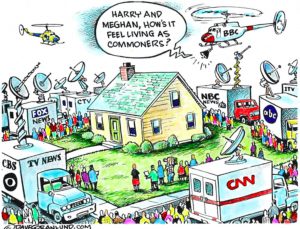 The couple would now need to rely on President Trump to make an exception to cover the costs, the source said.

‘It will be down to Harry or his Met Police protection officers to ask for help,‘ they said.

‘There is a reciprocal agreement between the US that allows protection officers to carry their weapons. But Harry is no longer a serving royal and that is why his protection in Canada from the Mounties was withdrawn.

‘Someone is going to have to ask the State Department, and ultimately the decision rests with Donald Trump, for assistance. Harry cannot live in the US without armed protection.’

Given Meghan’s criticism of the US leader – and snubbing him at a Buckingham Palace banquet – he might not feel so generous to the pair.

Harry has also been disparaging of Trump saying he has ‘blood on his hands‘ during a prank telephone call when he was fooled into thinking he was talking to climate activist Greta Thunberg.

The couple will now have to plead with Trump to cover the costs.

If he refuses they will have to pay for private security or the UK will continue to foot the bill.

Oh the shame of it. Trump will not forget her actions. No No No. One bigly no.

Let them pay for their own security. Why do they need it. Not as if they are famous.

Previous article“Humans Are The Disease”
Next articleHave Your Say

The Dark Side of Clean Energy and Digital Technologies by Guillaume Pitron, review — our dirty future When Donald Trump offered to buy Greenland from Denmark...
Read more
Uncategorised