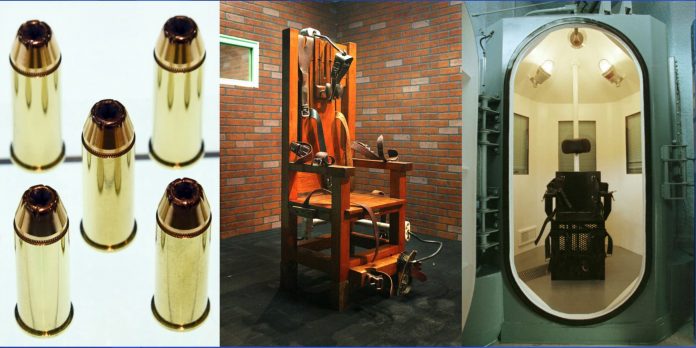 While the final 50 days of a president’s tenure are typically the quiet, lame-duck phase of their administration, Donald Trump is vigorously pursuing the fast-track authorization of a number of broad policy changes before he exits the White House in January, including the revival of firing squads and electrocutions in federal executions.

According to a report from ProPublica, a proposed rule change from the Department of Justice was registered in August and cleared a White House review this month, allowing the president to authorize the policy just before his time in office ends.

Typically, federal executions are carried out by lethal injection. Such has been the case without exception for the past decades.

Just last week, the Justice Department announced its intention to execute three more inmates on federal death row. If the executions are administered – along with two other previously-scheduled executions – there will have been 13 prisoners put to death since July of this year, marking one of the most deadly periods in the history of federal capital punishment since 1927, notes the New York Times.

“What is clear is that this administration wants these prisoners dead before Joe Biden takes office,” Executive Director of the Death Penalty Information Center Robert Dunham told CNN. The last time over one execution happened during a presidential transition was during the end of Grover Cleveland’s first transition, from November 1884 to March 1885.

In the proposed rule, which should be published in the Federal Register on Friday, the administration asserts that “death by firing squad and death by electrocution do not violate the Eighth Amendment’s prohibition on cruel and unusual punishment”

The proposal also claims: “In recent U.S. Supreme Court litigation involving Eighth Amendment challenges to execution by lethal injection, nitrogen hypoxia and firing squad have been identified as potential alternative methods of execution, including by prisoners themselves, that might – or even must– be used instead of lethal injection, in particular because those methods allegedly carry a lesser risk of pain.”

It remains unclear whether the rule would practically have any importance, especially given the fact that President-elect Joe Biden opposes the death penalty and has vowed to seek the elimination of capital punishment for felony convictions and the suspension of federal executions.

Since he was sworn in last year, Attorney General William Barr has aggressively pursued the use of capital punishment to bring “justice to victims of the most horrific crimes,” resuming federal executions after a 17-year hiatus of the practice.

Critics argue that the death penalty is far too frequently used against people who have been wrongfully convicted, with 172 people being sentenced to death since 1973 who were later exonerated from their crimes.

Legal advocates are hopeful that the Biden-Harris administration could finally put an end to the federal death penalty as part of a broader overhaul of the criminal justice system. The Biden campaign has announced that it intends to end the practice on the federal level and incentivize an end to state executions, as well.

“As we find itself in the midst of a national reckoning with racism and our history of racial violence, ending the death penalty must be part of our transformation,” said former federal prosecutor Miriam Krinsky, who now heads the Fair and Just Prosecution advocacy group. “Abolishing the death penalty would be a signal that the Biden-Harris administration is committed to fairness, equity, and evidence-based justice — and the time for this definitive move is long overdue.”

However, the president has been hoping to finalize 36 major rule changes in his final days, similar to the 35 to 40 rule changes made by four previous administrations that were undone by their successors. In 2017, Republicans successfully overturned the outgoing Obama administration’s rule changes using the Congressional Review Act.

However, the lasting impact of the rule changes remain contingent on critical runoff elections in Georgia that could determine whether the Democrats could invoke the act or whether the GOP maintains control of the Senate.

Regardless of the outcome of that race, advocates remain opposed to the largely bipartisan inertia over the continuing practice of capital punishment in the U.S.

“Without question this unprecedented execution spree makes clear that this system is in need of either abandonment of the death penalty or major overhaul. It also shows that a moratorium just kicks the can down the road,” Dunham said. “Prior administrations including the Obama-Biden Administration failed to take action on these cases that created the circumstances in which you could have this thing of unparalleled series of executions.”

“There’s no question that these crimes were horrific, but that’s not the issue,” Dunham said. “You can go down the list of these executions one at a time and illustrate the injustices.”