The unnamed man who said he regretted the surgery straight away, argues that doctors did not warn him about the drastic outcome of the body-altering surgery. He says the surgery has left him infertile, incontinent and feeling like a ‘sexual eunuch’. 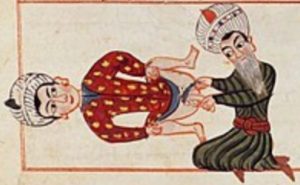 He said he had been effectively ‘castrated’ by the surgery saying: “The minute I woke up from surgery, I knew I had made the biggest mistake of my life.

The Mail Online reports: Campaigners say that it is the first medical negligence case over NHS transgender care in this country. The NHS trust involved has not been named.

Stephanie Davies-Arai, founder of Transgender Trend, a group advising parents on transgender children and young adults, said: ‘It is hoped this will force a re-think by the NHS about this kind of barbaric surgery on patients who are told by medics it will help them.

‘He has a very real case for compensation against the health service. We believe he has suffered harm.’

His case has been taken on by lawyers in Liverpool. It centers on whether the NHS and its gender clinics adequately counseled him before the operation five years ago. The patient, in his thirties, was brought up in the North of England and has de-transitioned from being a woman to living as a man again.

The man says he is gay and his sexuality should have been discussed before the radical, irreversible gender surgery. ‘I have been castrated. That is the correct term,’ he says on his Twitter feed, which has 19,000 followers.

‘I cannot believe they [the NHS] were allowed to do this to me.

‘I was not even asked if I wanted to freeze my sperm, or have kids in the future.’ He does not want to be named because he is ashamed of how he looks. Instead, he tweets under the pseudonym TullipR. 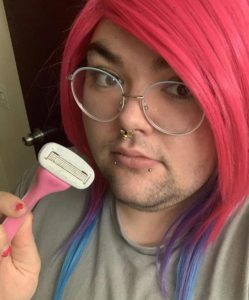 Yesterday, he posted a picture of his huge bundle of medical notes which will be used by his lawyers to bring the case against the NHS.

TullipR says he transitioned at 25, more than a decade ago, and started taking female hormones to feminize his body. This was followed by surgery when he underwent an NHS operation called ‘penile inversion with scrotal graft’ which removes male genitalia and uses the tissue to construct a false vagina.

He says he grew up in the North East of England. ‘I knew deep down from a young age I was gay and was deeply terrified of it,’ he says in his tweets describing his past. ‘Everyone in the family joked and expressed disgust and disapproval of gay people.’

He withdrew into an online world where he felt at peace. There, at 23, he found discussions about gender dysphoria, the fear of living in the wrong sexual body. ‘That’s me, I thought.’

He found an internet forum called ‘Angels’ which was directed at trans women – men who wish to be women.

They urged him to transition ‘now’, before it was ‘too late’. He says that he latched on to the idea with zeal.

He took female hormone drugs bought privately, and later prescribed by his GP and an adult NHS gender clinic, to suppress his male characteristics and look feminine. But when an NHS psychiatrist asked him if he wanted gender reassignment surgery (GRS), he delayed for two years because he had doubts.

Worried that if he refused he would be denied NHS treatment for his gender problems, he finally agreed. 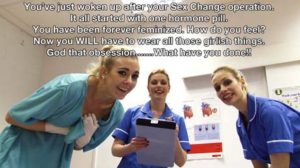 His tweets explain: ‘Eventually I found myself on the operating table. Immediately upon waking up from surgery, I knew I had made the biggest mistake of my life.

‘My sex had been lobotomised.’

After surgery, he confronted his GP about his doubts.

He claims they shrugged and said there was no guidance for those who regretted the surgery and treatment. The tweets go on: ‘I have no sensation in my crotch region at all. You could stab me with a knife. I wouldn’t know. The entire region is numb. No one ever told me that the base area of your penis is left. It can’t be removed. It means you have a stump inside which twitches.’

‘I was glad to be rid of it, but now… I realise what I am missing and I won’t get back.

He describes the ‘living nightmare’ of waking up and forgetting that he has lost his penis and scrotum. ‘I expect something that was there for three decades, and it’s not. My heart skips a beat, every damn time.’

Why Are People Falling Ill and Dying in Record Numbers? By Guy Hatchard Excess all-cause mortality in New Zealand is running at record levels. About 100 people...
Read more
Human Stupidity