You Stupid Boy
Home US Politics Oh the shame. You shouldn't piss off the boss

Oh the shame. You shouldn’t piss off the boss 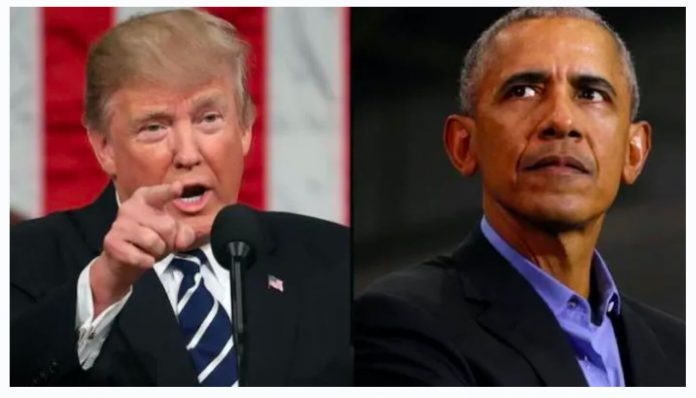 Former President Barack Obama’s portrait will not be gracing a White House wall any time soon, and the mainstream media is blaming President Donald Trump.

Traditionally, an official commissioned portrait of the last president is unveiled in an East Room ceremony by the current president, who makes polite remarks about his predecessor before adding the painting to the collection of portraits of former presidents.

But according to NBC News, however, neither Trump nor former President Barack Obama is interested in participating in this tradition that goes back decades.

But these two are not just any presidents: They have had a highly contentious public relationship. Recently, Obama took the opportunity of video commencement addresses to take shots at Trump’s handling of the coronavirus pandemic.

For his part, Trump has been vocal about the Obama administration’s role in unmasking the identity of former National Security Advisor Michael Flynn in a scandal dubbed “Obamagate.”

“You’ve got a president who’s talking about putting the previous one in legal jeopardy, to put it nicely,” presidential historian Michael Beschloss told NBC News.

“We have not seen a situation like that in history,” he said. “It takes antipathy of a new president for a predecessor to a new level.”

Despite how Beschloss described it, people close to the matter reportedly confirmed that Obama would not be interested in taking part in the ceremony as long as Trump was president, meaning the former president’s portrait could remain absent until 2025 if Trump is re-elected.

Trump apparently wasn’t disappointed to nix the event either, according to those same sources.

Still, liberals are furious at the supposed attack on Obama’s honor.

NBC and MSNBC legal analyst Maya Wiley blamed the absence of the ceremony on — you guessed it — Trump’s racism.

In a move that was as predictable as the sunrise, CNN also implied that Trump’s supposed snub was racially motivated, but it seems at the very least to be a mutual decision if not completely one-sided on the part of Obama.

The Obamas had unveiled their Smithsonian portraits in 2018, which were widely ridiculed at the time for their stylized portrayals of the couple, but the official White House presidential portrait is a completely separate commissioned work of art.

According to The Hill, the former president and first lady secured and signed an artist as per the usual procedure for the official portrait, but the process stopped there as neither Obama has yet to sit for their paintings.

If that report is true, it may indicate the decision was mainly Obama’s because, after all, a painting that does not exist cannot be unveiled.

Regardless of who was responsible, Obama’s media cronies are always concerned about his legacy, often citing the ridiculous myth that his presidency was scandal-free in an attempt to bolster his image, so blaming Trump plays well into their established narrative.

On the other hand, it is fun to imagine Obama, a president who relished being in the company of celebrities, to edge his way into their spotlight, mulling whether it would be better to forgo his portrait ceremony to “rob” Trump of that honor if that is, in fact, what happened.

Regardless of how this situation came about, it is satisfying to know that Obama’s portrait will not have a place in the White House as long as Trump is president.

That must be infuriating to the leftists who treasure Obama as their dear leader, and would make Trump’s potential re-election a doubly painful prospect.

And surely, Trump and his supporters wouldn’t want it any other way.

They cannot hang something that doesn’t yet exist. Fast forward five years time and they will be asking “Who was that black man”