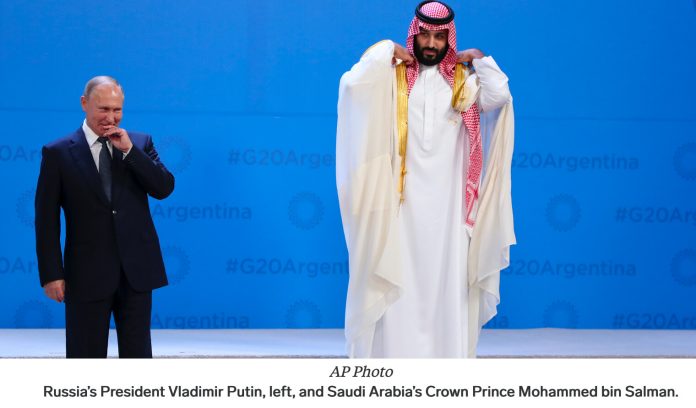 To fight the economic fallout from the spread of coronavirus countries will need to engage in massive global coordination. On Friday, and again on Monday, we had our first test of that global coordination as oil producers met to discuss how to stabilise the price of the commodity.

And unfortunately, ladies and gentlemen, they failed.

It all started on Friday when Russia decided that it would not cut oil production in order to keep prices stable. As it stands, demand for oil is expect to slip due to coronavirus disruptions, so the OPEC producers and Russia would in theory want to limit supply and keep the price of oil from collapsing.

But reports indicate that Russia decided not to cut production for a reason completely unrelated to coronavirus – to take revenge against the United States for sanctions related to Russian meddling in US elections.

That is to say, that in the midst of all of this coronavirus chaos, Russian President Vladimir Putin decided it would be a good time to turn his back on OPEC to start a price war just to hurt shale producers in the United States. At best this was petty, at worst this is dangerous.

On Monday things started leaning toward dangerous, as Saudia Arabia retaliated against Russia, cutting prices and announcing that it would boost output and offer discounts to the US, Asia and Europe.

This says a lot about how the world will fare combating coronavirus. If two parties with interests as aligned as Russia and Saudi Arabia – whose economies depend on oil prices – cannot coordinate in this time of crisis, then who can?

What the world needs now is love, sweet love.

Ideally, now is the time for every country in the world to put their differences aside and row in the same direction. Markets move on trust. Last week the market could trust that Russia would act in its own self interest to keep oil prices high. That trust, in turn, kept markets more stable.

Now that trust is gone, and so the market is puking. Goldman Sachs sees Brent crude, the European benchmark price, hitting $US20 a barrel. Analyst Damien Courvalin that this oil price war will likely be worse than the last one in 2014 “as it comes to a head with the significant collapse in oil demand due to the coronavirus.”

This will mean lost jobs and a deep recession in parts of the US. Energy producers hold a lot of debt and so weak cashflow could mean defaults across the industry.

After a couple years of flatlining consumption the energy sector has been in a bad place. States, like Texas, that have economices that depend on oil production were already tightening their belts. At least, though, back in December it seemed like oil producers were working together to do something about it. They cut production. Markets could trust that countries were cooperating for their own benefits and the benefit of the global economy.

An ‘every man for himself’ attitude

What’s more disheartening is that it seems this “every man for himself” attitude is popping up everywhere around the world in the wake of the coronavirus.

The Chinese – whose refusal to let global public health officials on the ground at the beginning of the coronavirus crisis has undoubtedly made things worse – have decided to react to its spread with denial instead of cooperation. Internet conspiracy theorists are rewriting the history of the virus’ origin, blaming the US to absolve the Chinese government for its lack of action. On China’s heavily censored internet, it’s hard to see how that’s happening without the government’s blessing.

In Germany economists and businesses say the government is acting too slowly to use its surplus to combat the economic impact of the spread of the virus. That’s not just bad for Germany, but for all of the EU as Germany is in the best economic position to lead efforts to stabilise the region.

It is in everyone on the planet’s interest to keep markets stable and economies moving during this coronavirus crisis. Right now it doesn’t seem like countries have the will, or that there are any leaders with the ability, to keep us all on the same page.

If this keeping up things are not going to go well.

Previous articleHave Your Say
Next articleRacism Alive In the EU

The Dark Side of Clean Energy and Digital Technologies by Guillaume Pitron, review — our dirty future When Donald Trump offered to buy Greenland from Denmark...
Read more
Uncategorised