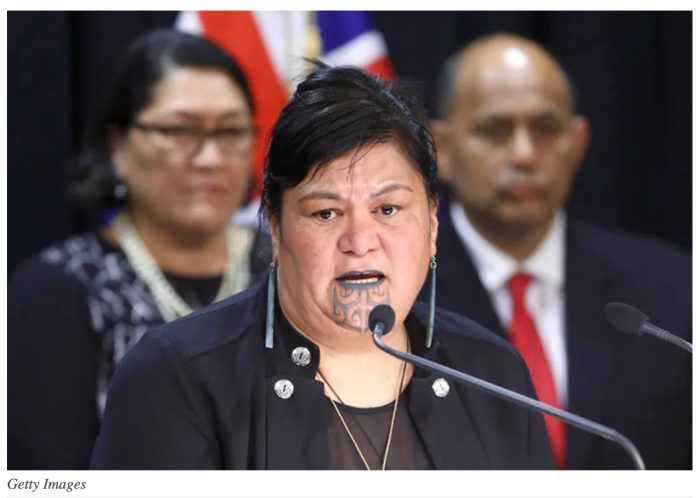 The fight for New Zealand is now underway

In spite of government opposition, a radical report proposing destroying  New Zealand’s democracy, unintelligibly called He Puapua (let’s not give it an English title, or people may begin to wonder what is in it) has been released, because of an appeal under the Official Information Act (OIA). A previous, heavily redacted version was finally released but only as a result of constant pressure.

He Puapua argues for this country to be predominantly governed by individuals of part-Maori ancestry and for those of part-Maori descent — no matter how minimal. A separate parliament and civil service is to govern those identifying as Maori, with, as usual, no definition of who can legitimately be regarded as Maori — in a country where intermarriage has been the norm for 200 years — and where full-blooded Maoris no longer exist.

Its intent is for separate Maori health and court systems; Maori ownership of the foreshore and seabed (now already happening); separate Maori wards on  councils; Maori governance over water and every other possible sphere of influence — such as the reassignment of the entire conservation estate under the Department of Conservation (DOC).

This two-systems approach has already been adopted, with health reforms dominated by a separate Maori Health Authority able to veto government decisions relating to everybody’s health. Under Jacinda Ardern’s supervision, Labour has already pushed legislation through parliament to ensure the public no longer has a say with regard to Maori wards on councils. Moreover, it is envisaged that progress between basically two governments would be overseen by the Aotearoa Monitoring Group, currently chaired by the Maori sovereignty activist, Margaret Mutu. Larded with increasing numbers of untranslated Maori words and phrases — making it virtually impossible for most New Zealanders to understand — it has been well described as ‘a masterpiece of deceit’. No reference is made to the fact that a previous Independent Constitutional Review Panel examining radicalised Maoris’ call for a Treaty-based constitution found widespread opposition to the proposal, with 96 per cent of submissions opposing it, ‘and 97 per cent vehemently opposed to local government Maori seats’.

Incredibly, some former politicians are simply shaking their heads at Jacinda’s supposed ‘naïveté’. This manipulative politician, adept at projecting compassion and well-being, flashing her famous smiles, and  talking at great length —while  managing to say almost nothing relevant in response to questioning — is dodging accountability by switching to vigorous and indignant Hollywooding, claiming she hasn’t read the document.

Who actually believes her, given that while she claims the report hasn’t found its way to the Cabinet table, and refuses to state her view on its recommendations, her ministers are already implementing some of its communications? Her current ploy is to brush off criticism of this pernicious, fundamentally racist document by accusing its critics of ‘playing politics’. So much for her promise of transparent government.

As historian Mike Butler has pointed out, the plan to implement He Puapua was slipped in under the radar, without troubling MPs or talking to the media. That Labour did not campaign on this in either the 2017 or 2020 elections invites the charge of sheer duplicity.

What we are being now faced with is apparently prevarication on a grand scale — from the same determined woman who has consistently handed over every possible advantage, with preferential taxpayer funding, to perennially obsessed part-Maori agitators.

This same adroit politician appointed the controversial Nania Mahuta to crucial portfolios imposing thoroughly undemocratic directions. Mahuta could not possibly have done so without Jacinda’s backing. And if the Prime Minister’s hand is being forced here, who is the puppeteer? To whom does she owe allegiance?

While she has described herself as socialist, in fact socialism is regarded as the smokescreen of communism — to tactically present a more palatable face to the public. Moreover, destabilising a democracy is regarded as a communist coup.

We should be under no illusions. This attack on this country is well under way, as is the Maori sovereignty takeover, assisted by a Prime Minister so foolishly dismissed as merely naive, but who, on the actual evidence — her ongoing promotion of divisiveness and separatism — is bad news for New Zealanders and undermining national unity.

What about government-related official institutions embracing the ridiculous? To simply laugh off what is happening would be a big mistake in relation to the nonsense recently produced by Christian Hawkesby, assistant-governor of the Reserve Bank, now to be known as Te Putea, no doubt to bring it into line with what pre-European Maoris used to call it before their colonist oppressors arrived.

Hawkesby’s recent address to the Institute of Directors centred around the claim that Tane, the God of the Forest, watches over all bank employees. ‘Each day as we walk through the security gates to enter our Wellington offices, Tane Mahuta (New Zealand’s oldest living Kauri tree) ‘looks back at us as a reminder of our responsibility… which is to ensure that “Tane will not wilt and lose mana”.’ And so on.

Could we ever have envisaged such nonsense — a Reserve Bank official calling on his staff to worship a giant tree to make sure it doesn’t wilt? It’s been pointed out that, ‘Mr Hawkesby is responsible for formulating monetary policy, providing equity in financial markets, managing the foreign reserves, operating interbank payment and settlement systems, and circulation of currency’.

It is not his job, if undertaking a personal journey into the psychobabble of animism, to inflict what many regard as less than rational thinking on bank employees. He should be required to resign. Simply calling what he said ridiculous is only a start. His New Age nonsense and arguably racist activism is conduct unbecoming  – not only unacceptable – but with no place in government.

And yet this primitive underpinning of what should be rational advocacies is becoming increasingly pervasive — as with activists’ success in opposing specific project developments because of the claimed presence of taniwhas (mythical Maori monsters).

With New Zealand’s democracy now white-anted by racist policies, we will also deservedly become a laughing stock if our politicians and bureaucrats continue to pay obeisance to primitivism. However, as  Einstein observed, ‘Only two things are infinite, the universe and human stupidity, and I’m not sure about the former.’