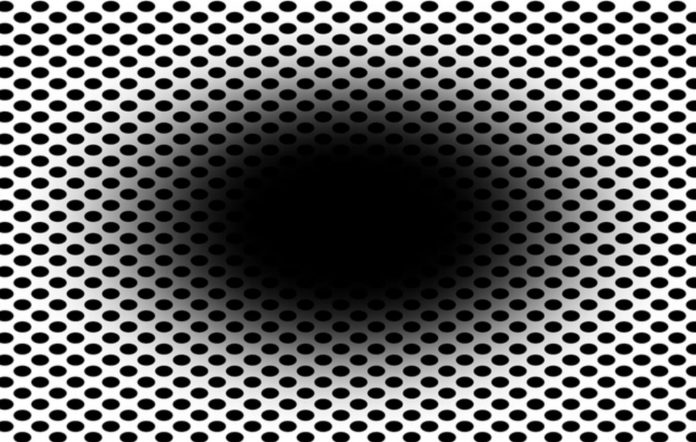 1 in 7 don’t see this black hole ‘moving,’ and scientists don’t know why

Notice anything strange about this image? When most people look at the “expanding hole” optical illusion, they see the black hole at the center growing. This new illusion is incredibly adept at deceiving most brains and fooling the reflexes of our eyes, according to new research from Norway.

“The ‘expanding hole’ is a highly dynamic illusion: The circular smear or shadow gradient of the central black hole evokes a marked impression of optic flow, as if the observer were heading forward into a hole or tunnel,” says the first study author Dr. Bruno Laeng, a professor at the Department of Psychology of the University of Oslo.

Nearly 9 in 10 experience a pupil reflex

Many may disregard optical illusions as nothing more than child’s play, but researchers explain they hold legitimate scientific psycho-sociological merit. Scientists study optical illusions to better understand the complex visual systems at play as the eye and brain both make sense of and anticipate the visual world.

This latest report documents the astounding deceptive abilities of the expanding hole illusion. The image actually tricks the human mind so well that it triggers a dilation reflex in the pupils for 86 percent of the people who see it! This reflex allows in more light, just like what would happen if someone moved into a dark area.

“Here we show based on the new ‘expanding hole’ illusion that that the pupil reacts to how we perceive light – even if this ‘light’ is imaginary like in the illusion – and not just to the amount of light energy that actually enters the eye. The illusion of the expanding hole prompts a corresponding dilation of the pupil, as it would happen if darkness really increased,” Prof. Laeng explains.

Study authors explored a large variety of other possible hole or surrounding dot colors besides black: blue, cyan, green, magenta, red, yellow, and white. The team displayed numerous variations of the expanding hole illusion on a screen for 50 people with normal vision (both male and female). Each participant was asked to rate subjectively how strongly they perceived the illusion.

Meanwhile, as each person looked at the images, researchers were measuring their eye movements and pupils’ unconscious constrictions and dilations. To serve as controls, participants were also shown “scrambled” versions of the illusion (equal luminance and colors, but no colors).

Why don’t some people see the illusion?

The optical illusion was most effective with a black hole. Even so, 14 percent of participants still didn’t perceive any illusory expansion when the hole was black. In comparison, 20 percent didn’t see anything if the hole was in color.

Among those who do see the illusion, the subjective strength of the effect varies. For some it is quite noticeable, while others see a more subdued expansion.

The research team also notes black holes specifically promoted strong reflex dilations in pupils, while colored holes actually had the opposite effect: participants’ pupils constricted. The stronger a person rated their perception of the illusion, the more their pupil diameter changed. Importantly, however, this only held true regarding black holes.

As far as why some people still don’t see the illusion, researchers can’t say for now.

“Our results show that pupils’ dilation or contraction reflex is not a closed-loop mechanism, like a photocell opening a door, impervious to any other information than the actual amount of light stimulating the photoreceptor. Rather, the eye adjusts to perceived and even imagined light, not simply to physical energy. Future studies could reveal other types of physiological or bodily changes that can ‘throw light’ onto how illusions work,” Prof. Laeng concludes.

Previous articleHave Your Say
Next articleCensorship Isn’t the Solution

How Fast Is That?

China & Rare Earth Metals China once played an insignificant role in the global rare earth elements industry. However, through the country’s recognition of the...
Read more
Science

Australia To Forcibly Vaccinate Citizens Via Chemtrails Australia have approved the license application from Big Pharma company PaxVax that will allow them to intentionally release...
Read more