You Stupid Boy
Home World News Our MSM must have missed this.

Our MSM must have missed this. 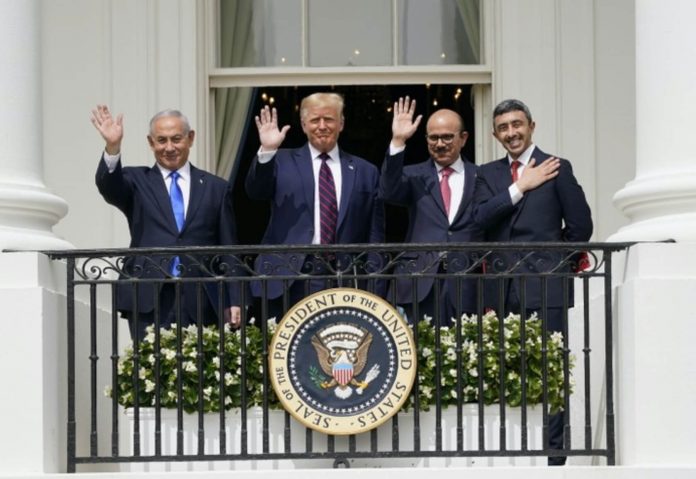 President Donald Trump has laid the groundwork for yet another historic Middle East deal with Israel, a monumental deal that would cement his reputation as the president who brought peace and realignment to the notoriously unstable region. It seems that Saudi Arabia, the largest, richest, and most symbolically important Arab country in the Middle East, is on the verge of recognizing the Jewish State of Israel.

Yet, according to the Jerusalem Post, the head of Israel’s intelligence agency Mossad has said that Saudi Arabia is waiting until the U.S. presidential election to normalize relations with Israel. Mossad Director Yossi Cohen said that if Trump wins, the Saudis will present the peace deal as a “gift.” If Democratic nominee Joe Biden wins, the Saudis will still want a deal with Israel, but the timeline would get murky.

“Cohen had emphasized that the Saudis did not want to give a gift to Trump and then get nothing for it upon a Biden administration taking over the reins,” the Post reported.

A Biden administration would throw yet another large wrench into the situation by restoring the Iran Nuclear Deal, in which the U.S. freed up Iranian assets — even sending pallets of cash to the mullahs — in exchange for almost certainly empty promises not to pursue nuclear weapons. Trump’s rejection of this deal, along with his assassination of Quds Force General Qassem Soleimani, marginalized Iran and enabled Arab states to make deals with Israel.

It is extremely likely that the Biden administration would sacrifice Trump’s historic progress in the Middle East. Climate regulations may damage America’s energy independence (achieved through clean natural gas), and a Biden administration may also alienate Israel to some extent.

Trump has achieved monumental breakthroughs in Middle East diplomacy. Not only did he formally recognize Jerusalem as the capital of Israel, moving the U.S. Embassy there, but he led many Arab states to recognize Israel. In the Abraham Accords, Bahrain and the United Arab Emirates (UAE) normalized relations with Israel. Shortly before the Abraham Accords, Trump brought Muslim-majority Kosovo and Christian-majority Serbia together for a historic agreement that included promises to set up embassies in Jerusalem. Last week, Sudan — which recently ousted a dictator who supported terrorism for decades — normalized relations with Israel.

Before the Abraham Accords, Bahrain and Saudi Arabia announced they would open their skies to Israeli flights to the UAE. As part of its rapprochement with Israel, the UAE agreed to order hotels to serve Kosher foods in Abu Dhabi, delivering a powerful symbol of Jewish acceptance in a notoriously anti-Semitic part of the world.

These historic diplomatic successes have brought Trump multiple Nobel Prize nominations, but Saudi Arabia would be the jewel in the Trump administration’s Middle East policy crown.

Saudi Arabia has long competed with Iran to become the most powerful country in the Middle East. The United States has sided with Saudi Arabia against Iran, to varying degrees. The previous deals would likely not have taken place without tacit Saudi consent.

A Statfor analysis noted that Saudi media commentary on the Sudan-Israel deal “suggests Riyadh is trying to prepare its citizens for the formalizing of their country’s own ties with Israel.”

State-owned outlets in Saudi Arabia, including Al Arabiya, Arab News, and Al Riyadh, have either syndicated reports from foreign outlets or published their own uncritical articles on the news. “As of Oct. 26, the Saudi monarchy also has yet to take diplomatic or even symbolic steps to signal its disapproval of Sudan’s move to normalize its Israeli ties.”

On the contrary, Saudi officials reportedly participated in talks between Sudan and Israel. Saudi Arabia has long contributed aid to Sudan, so Riyad has substantial influence over the country.

Statfor also concluded that the Saudi government likely banned media from criticizing the normalization of ties with Israel.

A recent Zogby poll found that nearly 80% of Saudis favor normalizing ties with Israel over the next five years. Even so, the actual normalization of ties would set a monumental precedent for Arab-Israeli peace.