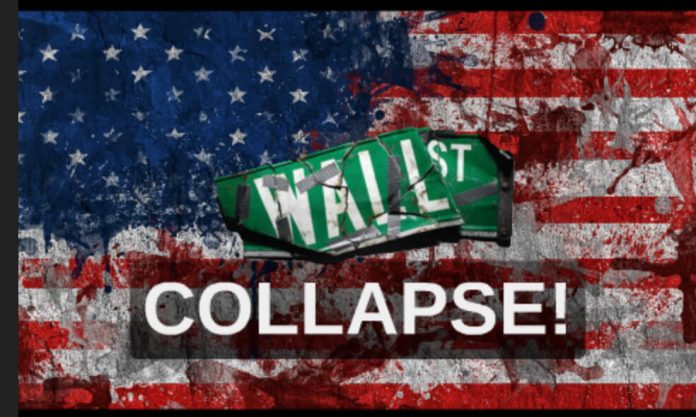 AT $49.1 TRILLION, THE U.S. STOCK MARKET IS LARGER THAN THE COMBINED GDP OF THE U.S., CHINA, JAPAN AND GERMANY

By Pam Martens and Russ Martens 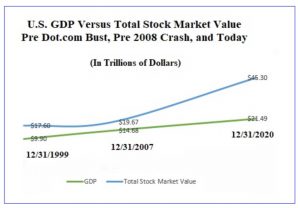 When the motherlode of stock market bubbles finally pops, exposing the corrupt edifices on which it was built, you can count on one thing for sure – there will be lots of testimony before Congress that no one could have seen it coming.

The simple chart above, that took us 30 minutes to prepare in an Excel spreadsheet, is proof that anyone among the legions of Wall Street bank regulators at the Federal Reserve, the OCC, the FDIC, and the SEC can see what’s coming.

At year-end 2007, prior to the greatest Wall Street collapse since the Great Depression, the total stock market value was 1.34 times GDP.

A $49.1 trillion stock market is larger than the combined GDP of the four largest industrialized nations (U.S., China, Japan and Germany) according to International Monetary Fund data.

The absurdity of the valuations in the U.S. market are captured in this statistic: just five companies (Apple, Microsoft, Amazon, Google’s parent Alphabet, and Facebook) account for a total of $7.85 trillion of the $49.1 trillion total stock market value. That’s five companies out of thousands and yet they represent 16 percent of the total stock market value. And here’s another deeply troubling thought: each of those five stocks are being traded in the Wall Street banks’ secretive Dark Pools.

The U.S. economy and millions of our fellow Americans suffered terribly during each of the last crashes, which must be placed directly at the feet of the regulators who failed to do their job on behalf of the American people, opting instead to audition for lucrative jobs on Wall Street.

In the midst of the dot.com crash, Ron Chernow described what was happening for New York Times’ readers on March 15, 2001:

“Let us be clear about the magnitude of the Nasdaq collapse. The tumble has been so steep and so bloody — close to $4 trillion in market value erased in one year —  that it amounts to nearly four times the carnage recorded in the October 1987 crash.”

Chernow called the Nasdaq stock market a “lunatic control tower that directed most incoming planes to a bustling, congested airport known as the New Economy while another, depressed airport, the Old Economy, stagnated with empty runways. The market functioned as a vast, erratic mechanism for misallocating capital across America,” Chernow wrote.

But it wasn’t a free market defect that was directing investors’ capital to brand new businesses with no realistic plans for long-term survival. The “lunatic control tower” wasn’t a lunatic at all. The men behind the curtain in the control tower were making millions of dollars as crooked analysts at some of Wall Street’s largest investment banks. They were snake oil salesmen pushing “hot IPOs” on unsuspecting customers of the Wall Street banks while calling the offerings “dogs” and “crap” in internal emails.

On April 28, 2003, the SEC, which conveniently has no criminal powers, settled the rigged research practices with 10 Wall Street banks for $875 million. Let that sink in for a moment: Nasdaq investors lost trillions of dollars but Wall Street got off with a payment of $875 million. And no one went to jail. Just two individual analysts were charged: Jack Grubman of Citigroup’s former Salomon Smith Barney unit and Merrill Lynch’s Henry Blodget. Both men were barred from future affiliation with a broker-dealer and paid fines that were just a fraction of the bonuses they had collected.

The impact on average Americans following the great Wall Street crash of 2008 was summed up by the Financial Crisis Inquiry Commission (FCIC) report as follows:

“The profound events of 2007 and 2008 were neither bumps in the road nor an accentuated dip in the financial and business cycles we have come to expect in a free market economic system. This was a fundamental disruption—a financial upheaval, if you will—that wreaked havoc in communities and neighborhoods across this country. As this report goes to print, there are more than 26 million Americans who are out of work, cannot find full-time work, or have given up looking for work. About four million families have lost their homes to foreclosure and another four and a half million have slipped into the foreclosure process or are seriously behind on their mortgage payments. Nearly $11 trillion in household wealth has vanished, with retirement accounts and life savings swept away. Businesses, large and small, have felt the sting of a deep recession. There is much anger about what has transpired, and justifiably so. Many people who abided by all the rules now find themselves out of work and uncertain about their future prospects. The collateral damage of this crisis has been real people and real communities. The impacts of this crisis are likely to be felt for a generation. And the nation faces no easy path to renewed economic strength.”

The economy of a great nation and the lives of tens of millions of Americans were turned upside down because regulators, paid by the American people to ensure a safe and sound banking system and honest practices on Wall Street, sold out to greed.

The FCIC report notes this:

“Despite the expressed view of many on Wall Street and in Washington that the crisis could not have been foreseen or avoided, there were warning signs. The tragedy was that they were ignored or discounted. There was an explosion in risky subprime lending and securitization, an unsustainable rise in housing prices, widespread reports of egregious and predatory lending practices, dramatic increases in household mortgage debt, and exponential growth in financial firms’ trading activities, unregulated derivatives, and short-term ‘repo’ lending markets, among many other red flags. Yet there was pervasive permissiveness; little meaningful action was taken to quell the threats in a timely manner.”

Archegos Unpacked: Equity Derivative Contracts Held by Federally-Insured Banks Have Exploded from $737 Billion to $4.197 Trillion Since the Crash of 2008

Margin Debt Has Exploded by 49 Percent in One Year to $814 Billion. The Actual Figure May Be in the Trillions. Here’s Why.

On One Day Last Year, the Fed Had $495.7 Billion in Loans Outstanding to Unnamed Wall Street Trading Houses

Senator Ossoff Drops a Bombshell: “The 12 or 13 Largest Banks” Got the Trillions from the Fed’s Repo Loans Last Year

Three of the Biggest Banks on Wall Street Have $7.4 Trillion In Off-Balance Sheet Exposures

We ask every American who loves their country to pick up the phone today and call your Senators and House Reps and demand that honest and capable Wall Street regulators be put to work on behalf of the American people.

Previous articleHave Your Say
Next articlePrior Infection vs Vaccination