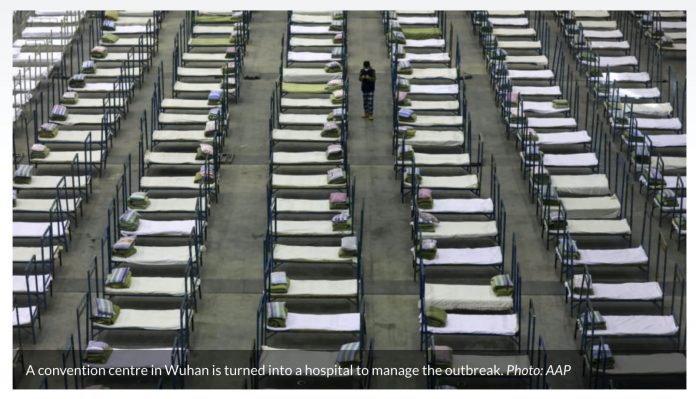 How the coronavirus compares to other big outbreaks

Flights are grounded, whole cities are in lockdown, cruise ships have become containment centres and treasurers are stressed.

The new coronavirus has sent shock waves across the world, and although it hasn’t officially reached ‘epidemic’ proportions, many of the world’s leading infectious disease experts believe it is likely to become a pandemic – an epidemic on two or more continents.

Here is how this new coronavirus compares to other major disease outbreaks that have swept across the world.

Swine flu was the deadliest, killing an estimated 284,500 people, spreading to 214 countries and according to several studies, infecting between 11 and 21 per cent of the world’s population, which was 6.93 billion at the time.

The World Health Organisation (WHO) stopped tracking the total number of cases in the middle of the pandemic. The actual numbers might be much larger as only serious cases were tested, but the reported fatality rate was 0.02 per cent.

Coronavirus, on the other hand, currently has a mortality rate of around two per cent – but many people believe the number of cases could be much higher than is being reported, which would bring the percentage down.

Swine flu emerged in Mexico in March 2009, and after spreading to 74 countries the WHO declared it a pandemic. They were first criticised for taking too long to call a pandemic, then for hyping up the outbreak.

Swine flu has now become a regular in our flu season and many doctors believe coronavirus could become the same.

Out of the animal kingdom

Ebola is transmitted through bats and other primates.  The origins of SARS and MERS are both uncertain but analysis shows they’re also spread through mammals.

They all move at different rates, but coronavirus’s breathtaking speed has more to do with where the outbreak started, said Virologist at the University of Queensland Ian M. Mackay.

“The new coronavirus moves quickly because it’s better able to spread from human to human than Ebola virus and seems to be more efficiently transmitted than SARS-CoV was,”  he told The New Daily.

“There is also a wide clinical spectrum among cases, including mild illness. But in context, the virus emerged in a very populated area. So its perhaps also unsurprising the numbers are much bigger than most Ebola outbreaks or past epidemics.

“It’s travelling at the speed of a flu-like virus. The 2009 influenza pandemic virus also moved quickly around the world. This is precisely what a well-transmitting respiratory virus is capable of.”

Common influenza is still more deadly. Typically, seasonal flu has a mortality rate below one per cent and is thought to cause about 400,000 deaths each year globally.

“We have a vaccine for flu that can prevent death, but its uptake isn’t widespread,” said Mr M. Mackay.

“We do need a better vaccine but that’s another story. Will refusal or limited uptake also be an issue should we get a novel coronavirus vaccine?”

“We may see this virus peak in the coming months according to models, but we may not be able to contain and eliminate it the way did for the SARS-CoV.”

Previous articleGuest Post by Old Cynic
Next articleTimes Up for NZ First?