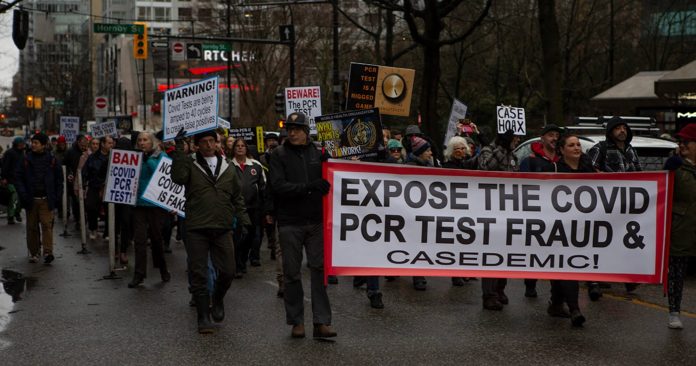 Could this be why flu virus deaths decreased by 99 percent in 2020?

In a new announcement, the CDC declared that it will withdraw its emergency use application for the controversial PCR tests on December 31, 2021, and is urging clinics and hospitals around the country to immediately begin the process of using new tools better able to “facilitate detection and differentiation of SARS-CoV-2 and influenza viruses” because “Such assays can facilitate continued testing for both influenza and SARS-CoV-2 and can save both time and resources as we head into influenza season.”

Many skeptics have noted that, with the emergence of COVID-19, flu cases diminished at a level that strains credulity. While the CDC estimated that between 24,000 and 62,000 died of “influenza related illnesses” in 2019, the number shrunk by nearly 99% in 2020, to a modest 646 deaths. Many have pointed to overuse of the PCR tests, which are designed to detect incredibly small amounts of viruses, for this massive change.

As National File reported earlier this year, the inventor of the PCR test once said Anthony Fauci, the decades-long director of the National Institute of Allergy and Infectious Diseases, “doesn’t know anything” and is willing to lie on television. “Guys like Fauci get up there and start talking, you know, he doesn’t know anything really about anything and I’d say that to his face. Nothing. The man thinks you can take a blood sample and stick it in an electron microscope and if it’s got a virus in there you’ll know it,” said PCR test inventor Kary Mullis.

“He doesn’t understand electron microscopy and he doesn’t understand medicine and he should not be in a position like he’s in. Most of those guys up there on the top are just total administrative people and they don’t know anything about what’s going on in the body. You know, those guys have got an agenda, which is not what we would like them to have being that we pay for them to take care of our health in some way. They’ve got a personal kind of agenda. They make up their own rules as they go. They change them when they want to. And they smugly, like Tony Fauci does not mind going on television in front of the people who pay his salary and lie directly into the camera,” Mullis added. (Emphasis added)

COVID Vaccines Bloody Travesty: From Shots to Clots By Joel S. Hirschhorn People face a difficult decision on whether or not to take an experimental or even...
Read more
Chinese Virus

India State of 241 Million People Declared COVID-free after Government Promotes Ivermectin The state of Uttar Pradesh in India, which has the equivalent of two-thirds...
Read more
Chinese Virus