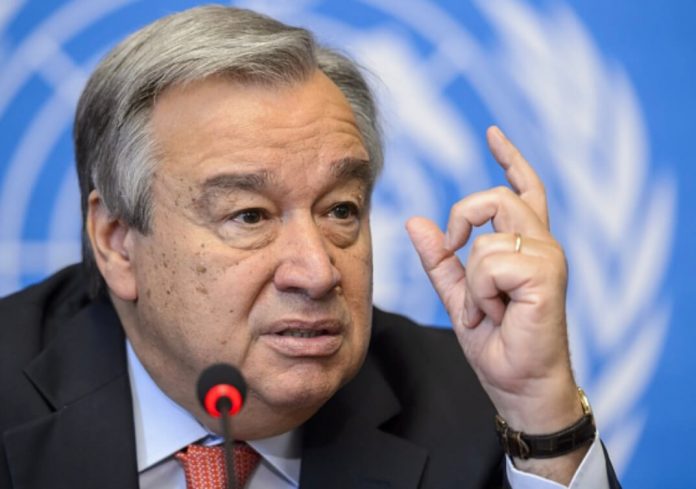 The climate racket is a license to steal. It is a massive scare campaign to enslave & to impoverish us all. Guterres is a vile degenerate. This fraud must be stopped!

Nature is determined to destroy humanity through flood, famine, fire, and pestilence, U.N. Secretary-General Antonio Guterres declared Wednesday, prophesizing the time has come for us to repent and mend our ways through a great climate and economic reset.

In an address at Columbia University in New York City, Guterres said the global climate has long been “reacting” to man-made changes, but emphasized there’s still time to prevent a total biodiversity collapse if we fall in behind the U.N. and its multiple agencies.

More of the same from globalist Guterres:

U.N. chief Antonio Guterres called for the world to “urgently redistribute power” so as to end gender inequality which he said “should shame us all in the 21st century because it is not only unacceptable, it is stupid.”

In overcoming #COVID19, we can also avert climate catastrophe and restore our planet. We have a chance to not simply reset the world economy but to transform it. Pandemic recovery and our planet’s repair can be two sides of the same coin.

“Humanity is waging war on nature,” the Portugese socialist said. “This is suicidal. Nature always strikes back — and it is already doing so with growing force and fury.”

Guterres’ remarks begin a month of U.N.-led climate actions and came 10 days before its climate summit on Dec. 12, which is the fifth anniversary of the Paris Climate Accords.

He declared companies must adjust their business models for a green economy, and that means making carbon-free investments and follow the plans for recovery as laid out by the globalist organization.

“Biodiversity is collapsing. One million species are at risk of extinction. Ecosystems are disappearing before our eyes. Deserts are spreading. Wetlands are being lost. Every year, we lose 10 million hectares of forests,” he said.

“Oceans are overfished — and choking with plastic waste. The carbon dioxide they absorb is acidifying the seas. Coral reefs are bleached and dying. Air and water pollution are killing nine million people annually — more than six times the current toll of the [coronavirus] pandemic.”

Guterres said instead of looking to a return to “normal,” the world should take advantage of the “pandemic reset” to create “a more equitable and just world.”

Here’s what Guterres demanded the nations of the world do:

If we don’t, he said, we’re living on borrowed time, repeating a warning he made earlier this year in demanding changes to the way the world is run.

“This is a moment of truth for people and planet alike. COVID and climate have brought us to a threshold. We cannot go back to the old normal of inequality, injustice and heedless dominion over the Earth. Instead we must step towards a safer, more sustainable and equitable path.”

To think that this useless prick beat Helen for the top job. They must have thought her bloody useless if they elected this arsehole to the top job.