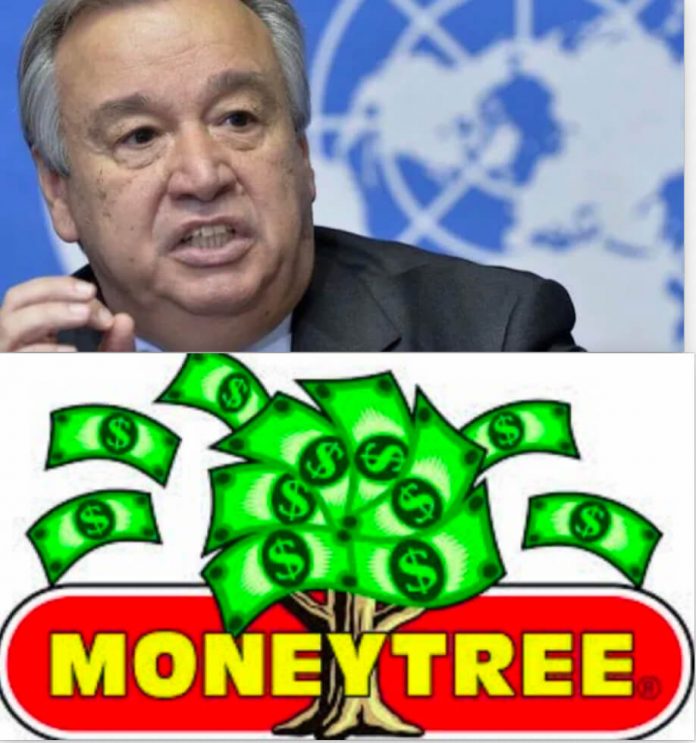 The United Nations is demanding sovereign nations pay the equivalent of at least 10% of the annual income of the entire planet to a new “fund” announced by Secretary-General António Guterres that will hold approximately $8.7 trillion USD, an unprecedented amount of money that would be 2,900 times greater than the UN’s annual budget.

UN Secretary-General Guterres announced the creation of the fund for addressing the global coronavirus pandemic, described as a massive “human-centered, innovative and coordinated stimulus package,” which would effectively create a new world superpower, with the global agency, presumably the UN itself, in charge of propping up the economies of sovereign nations during the crisis.

Although Guterres doesn’t state it explicitly, he seems to be connecting the new fund, which he calls a “dedicated COVID-19 Response and Recovery Fund,” with the massive stimulus package plan, announcing both measures in the same press release.

LifeSiteNews reports: Guterres also wants 100 billion USD for the World Health Organization, whose president has been blamed for helping to cause the coronavirus pandemic by repeating in January the Chinese government’s false claim that COVID-19 is not transmissible to humans.

He also wants the same organization to build an “interconnected Global Health Emergency System for data, workforce, and supplies.”

Guterres says that the money would be channeled “not only to the business sector and lead firms, but to the workers and SMEs worldwide that underpin the global economy.”

“It is not enough to protect major businesses: we need to protect their suppliers, and the global consumer demand – the household income – that will usher the global economy back to life,”  writes Guterres in his report, called “Shared responsibility, global solidarity: Responding to the socio-economic impacts of COVID-19.”

“To be effective, the stimulus package will need to focus on direct and targeted transfer of resources to the most vulnerable households and scaling up health emergency preparedness, social protection, tax abatement, low interest rates, access to credit, insurance and wage support schemes,” he writes.

Among the objectives of the plan, Guterres includes “attention to continued delivery of sexual reproductive health services, such as access to contraceptives without prescription during the crisis.”

“Sexual reproductive health services” are a euphemism often used by international organizations to refer to abortion and contraception.

Steven Mosher, president of the Population Research Institute, noted that the UN’s World Health Organization (WHO) helped to create the pandemic by repeating communist Chinese government’s false propaganda denying the health risks of COVID-19, and said he was against giving them or the UN in general any additional money for the crisis.

“The UN bureaucracy primarily exists to perpetuate itself and various Left-wing causes that are inimical to liberty and sovereignty,” Mosher told LifeSite. “If the China coronavirus teaches us anything, it is that in moments of global crisis we can only trust our fellow citizens not a distant and detached group of bureaucrats who are better compensated than nearly all Americans.”

He also noted that “reproductive sexual health,” in reality “means forcing contraception, sterilization and abortion on peoples who have not asked for it,” and added that such priorities have left poorer countries unprepared to deal with COVID-19.

“If the clinics in Third World countries had been stocked with medicine instead of abortifacients and contraceptives, they would be better able to cope with the current pandemic,” said Mosher.  “In other words, population control programs cost lives.”

Mosher also rejected more funding for the WHO, noting its complicity in spreading false information about the pandemic.

“The WHO, by parroting Chinese propaganda, helped to spread the pandemic.  Even now, they are continuing to claim that China is a ‘model’ for how to contain the pandemic,” Mosher told LifeSite. “They are part of the problem, not part of the solution.”

Mosher said that the U.S. should cut off funding to the WHO altogether unless its current head, Tedros Adhanom Ghebreyesus, resigned. He noted that the WHO receives more than 22% of its funding from the United States, and that much of the money “goes towards the salary, benefits and perks of an inflated, dysfunctional bureaucracy. In other words, it is simply wasted.”

Previous articleHave Your Say
Next articleWhere will the work come from.