You Stupid Boy
Home NZ Politics Plenty of Time For A Talk-fest Then?

Plenty of Time For A Talk-fest Then? 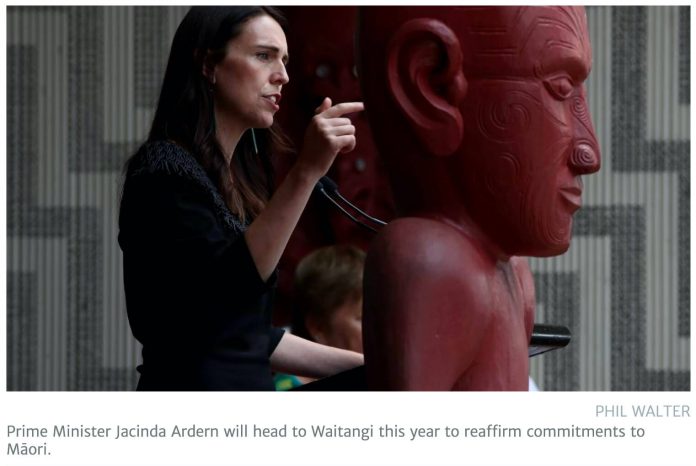 As Jacinda Ardern heads to Waitangi, Labour ponders re-election in 2020

ANALYSIS: Parliament returns from its summer break this month. After coming back on February 11, the House will sit for just 36 more days before rising and being dissolved for the General Election.

That’s not a lot of time, in the scheme of things, to make a pitch to voters who will head to the polls on September 19.

The raging furies of electoral politics’ year are never far away, especially not week-long commemorations at Waitangi, which function as the last of a series of events that kick-off the political year.

The Prime Minister will spend most of the week in Waitangi, setting the agenda for the political year. She’ll be making a particular pitch to Māori, who helped propel labour to victory in 2017, but who may smart at being taken for granted by the party, which now holds all Māori seats for the first time since it lost them in 2005.

The formalities kick off on Monday with the unveiling of a statue of Dame Whina Cooper at Waipuna Marae. Cooper was the first president of the Māori Women’s Welfare league. She was also a leader of the 1970s Māori land march to put a halt to the further erosion of Māori land ownership.

Also present will be Pania Newton, one of the leaders of the occupation at Ihumātao.

Newton sometimes draws comparisons between her own movement and the land marches.

“(Cooper) is someone who inspired the kaupapa at Ihumātao,” Newton said.

The sight of Newton and PM Jacinda Ardern together at the event could be awkward for Ardern, representing a Government that has repeatedly frustrated the protesters at Ihumātao. In other times, she might be able to channel the legacy of Cooper. The reality is murkier. The Government isn’t confiscating any land, but hasn’t exactly moved heaven and earth to please the occupiers.

Things seem to have simmered in recent weeks, with news that a deal is close.

She still plans to join the Hikoi from Paihia to Waitangi, whether or not she does so in a “spirit” of protest depends on whether the impasse at Ihumatao is resolved. She appears hopeful.

“I can’t really say anything at the moment,” she said, although she was buoyed by the fact the Kingitanga had left the consultation process “where they are comfortable”.

“We’re looking forward to the Government and council signing things off.”

As in previous years, the main political events will be held before Waitangi day on February 4, leaving Waitangi day for the traditional dawn service and breakfast barbecue.

The main event will be held at Te Whare Runanga, the Upper Marae, which has become the favoured site since commemorations were moved there in 2017 when Te Tii, the lower marae, lost the right to host the dawn ceremony. Celebrations have become more placid since the move.

Although there have been some tensions in 2018, a full-scale protest of the kind seen in previous decades – think Don Brash having mud hurled at him in 2004 – seems unlikely.

That’s not to say there aren’t political tensions.

The beginning of the political year has been marked by a revival in the fortunes of Labour’s bête noire, the Māori party. Former Green candidate, Jack McDonald threw an endorsement behind Māori party candidate Debbie Ngarewa-Packer, who is running in Te Tai Hauāuru, which Labour hold by just a few thousand votes.

Tau Henare knows what it’s like to take a Māori seat off Labour. In 1993, he became the first non-Labour candidate to hold a Māori seat since Āpirana Ngata, then a National Party MP, lost the Eastern Māori seat in 1943. He won his seat by just 416 votes, after splitting the vote three ways.

But Henare said stealing a Māori seat from Labour usually requires “the stars to align” and for voters to coalesce around a series of issues.

“There are a couple of issues that are bubbling away: Oranga Tamariki, Ihumātao, Whānau Ora,” Henare said.

Henare is watching Tāmaki Makaurau, which takes in most of Auckland, where there are rumours of John Tamihere, former Labour minister and unsuccessful Auckland mayoral candidate eying up a run for the Māori Party.

“My money is still on them holding the seats – but not a lot of money. I wouldn’t bet my house on it, I’d certainly put my garden shed on it.”

Labour’s Māori MPs have one card up their sleeve: making the Māori electorate-MPs run list only.

Meka Whaitiri, the co-chair of Labour’s Māori caucus, has left open the option of keeping Labour’s seven Māori electorates off the party list at the 2020 election.

The strategy worked in 2017 to force the hand of voters in the Māori seats, many of whom had been splitting their votes, giving Māori Party MPs an electorate vote, while giving Labour a party vote.

“To be honest, that was a clear strategy around forcing the hand of Māori voters,” Whaitiri said.

In 2017, Māori Party candidates polled more than double their party’s party vote in each of the Māori seats.

“They haven’t pissed people off – although there are some pissed off people,” he said.

It’s understood some of Labour’s Māori MPs have used the revival of the Māori party to leverage greater gains off their Labour colleagues, who are sometimes accused of taking the seats for granted. Noone wants a repeat of 2004, when Tariana Turia split from Labour to found the Māori Party.

The real test will be to see whether Labour promotes MPs from the Māori caucus to the Cabinet table should it win this year.

This will be lurking in the background at Waitangi, as every movement of the Government and attendees is scrutinised for political symbolism.

“Māori politics always starts the day after Waitangi: who is holding Titewhai Harawira’s hand? Who gets beaten up? It’s good theatre,” Henare said.

It may be good theatre, but Labour will be hoping there’s no twist ending to the tale of its revival in the Māori seats, although it will have to wait eight months to find out.

Previous articleSocialism in Action, Hey Cindy Look at This.
Next articleHave Your Say