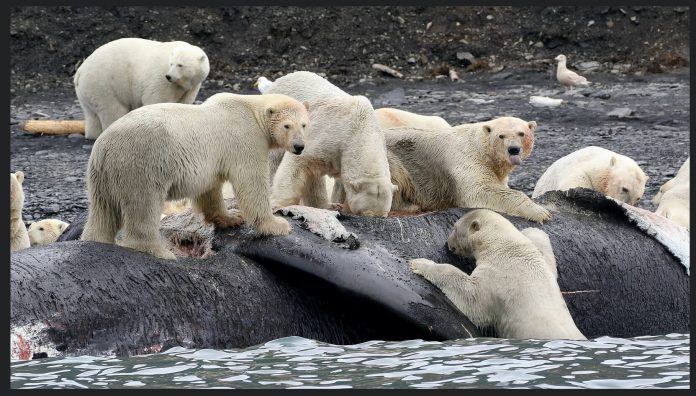 Contrary to the popular narrative that the polar bear population is falling as a result of shrinking Arctic sea ice, Inuit groups claim the species is thriving, according to federal affidavits submitted in court.

“Inuit have not noticed a significant decline in the health of the polar bears,” the Nunavik Marine Region Wildlife Board’s director of wildlife management wrote in court papers, reported Blacklock’s Reporter.

“In fact Nunavik Inuit report that it is rare to see a skinny bear and most bears are observed to be healthy,” the affidavit read.

Inuit groups submitted the documents after Environment Canada called for hunting quotas of the polar bear to be slashed, citing “conservation concerns.”

According to the International Union for the Conservation of Nature, there are around 22,000 to 31,000 polar bears worldwide at present, and the bears are listed as a vulnerable species.

For years, organizations such as the World Wildlife Fund (WWF) have cited the predicted decline of the polar bear population as an inevitable consequence of global warming. It estimated that global polar bear numbers will fall by 30 percent by 2050.

Similarly, a 2016 study on global polar bear numbers estimated the the global polar bear population could decline by more than 30 percent in as little as 35 years. Researchers looked at the effect of climate change on the Arctic Ocean and calculated the likelihood of the projected population drop as 71 percent. That’s because polar bears stand on Arctic sea ice when hunting for seals.

However, the federal affidavits claim residents in Nunavik, northern Canada, have seen an increase in the polar bear population, and “a particularly notable increase since the 1980s.” Twelve of the world’s polar bear subpopulations are mainly found in the region.

The Nunavik Marine Region Wildlife Board report contains quotes from a hunter saying that polar bears are “not going extinct” and that there is no shortage.

The report read: “Many participants were very concerned about perspectives from outside Nunavik that polar bears are endangered elsewhere.”

“All interviews conducted in the Southern Hudson Bay communities shared the view the population grew somewhat from the 1960s until the 1980s, and that a continued increase has been very noticeable since that time.”

A polar bear monitor, Leo Ikakhik, explained that a viral video of a starving polar bear may not be what it seems.

“I wasn’t totally surprised. These things happen,” he told the CBC. “Mother Nature is going to do part of that. You know, it’s just part of the cycle.”

The emaciated bear captured the attention of millions of people as it rummaged through trash to search for food.

“This is what climate change looks like,” said National Geographic.

Ikakhik has monitored bear activity around Arviat—a town on the western shore of the Hudson Bay—since 2010, and he works with organizations like World Wildlife Fund Canada to prevent the bears from coming near human populations.

“Everybody probably was shocked to see a really skinny bear, but this is not my first time seeing something like this,” he said.

He added to the CBC that it probably isn’t climate change that caused the bear to appear that way.

“I wouldn’t really blame the climate change. It’s just part of the animal, what they go through,” he said.

“Since I’m from the north, I wouldn’t really fall for the video,” he added.

“We are not sure that it was because of climate change. It is impossible to tell why he was in this state. Maybe it could have been an injury or a disease, but the point is that it was starving and we want people to know what a starving polar bear looks like, because as we lose the ice in the Arctic polar bears will starve,” SeaLegacy co-founder Cristina Mittermeier also noted.