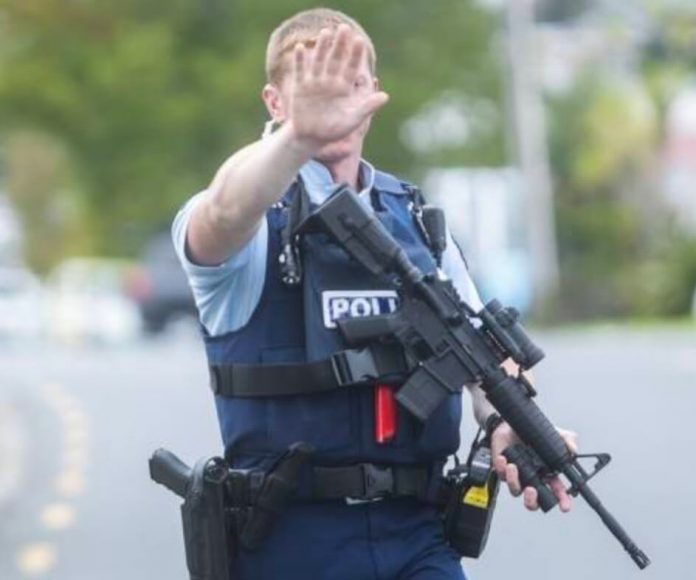 Posted today on rightminds.nz,  One wonders if the police have any interest in actual crime any more.  Who compiled this list of questions, which is sure to be a standard one for all suspected Jacinda government opponents? The location isn’t stated, but is probably somewhere in Auckland.

One of my friends and moderator on Right Minds, Matthew McCluskey, received a visit from the friendly local neighbourhood cops on Saturday night at 9pm. He’s allowed me to use his real name to provide some weight behind this bizarre story, as he usually performs his limited online activity under a pseudonym.

He was cleaning his Smith & Wesson M&P15-22 when the doorbell rang. There was a police detective at the door, with an armed escort waiting in the wings. He claimed to be doing a “follow-up check” on vetting, as Matthew had recently had his firearms licence approved. Which is rather strange, as protocols require proper vetting prior to a licence being issued. Matthew had just recently been through this process, including having his employer give a reference as part of the licence application.

They asked to look at his firearms storage, which has been recently inspected, and proceeded to take photos of, and document details on, all his and his step-father’s guns. The rest of his family arrived home and the police took him to his bedroom, closed the door, and told him to sit down.

He protested against being asked questions in private, but they ignored him until his step-dad opened the door and told them to come into the living room. They asked him a few questions about religion after noticing his Bible and rosaries.

He was told the M&P15-22 was “very scary” and the detective checked it over several times to make sure it wasn’t centrefire.

After 45 minutes, they left.

All this to harass a young man with virtually no online presence, mere months after they vetted him (which included interviewing both his step-father and his employer) just because it was the day before March 15th. Or perhaps because it was several days after the founder of Right Minds filed a lawsuit against police in court? Or maybe it was just a slow crime day and they wanted to pop in at a random house for a friendly visit.

Do you feel safe yet, comrade?

Advice from the Council of Licensed Firearms Owners was in this post. Don’t let the police get away with anything illegal (although they may think the law doesn’t apply to them, it does); it’s strongly recommended that you video any visit for use as evidence. —Eds

2. If you are a firearms licence holder – standard.

The police cannot enter your home uninvited to inspect your firearms or gun safe unless they have reasonable belief an offence has been committed. This requires a degree of evidence to support it.

You need to produce your firearms licence on demand, but you have 7 days to do this if it cannot be located immediately (s 26 2 of the Arms Act 1983).

My reading of the above story is that that young man’s rights under the bill of rights were well and truly breached by the police.

And then we see this. What gives the police to right to harass any potential member of an opposition party?

According to an article released this week, late Saturday night on the eve of the commemoration of the Christchurch massacre, a firearms licence holder was visited and interrogated by armed police at his home, and segregated from his family when they returned home later.

He was also asked directly about New Conservative:

The questioning style and content has chilling similarities to what kiwis have read in history books covering socialist governments, departments with historical identifiers such as ‘secret police,’ ‘political officers,’ ‘Ministry of Public Enlightenment,’ and social environments with suppressive speech laws and militarised police.

“Farmers, families, firearms owners are being raided by armed police. Conservatives are interrogated in their home and segregated from their family, questioned on personal beliefs such as politics, religion, who they know and what they believe,” says Deputy Leader Elliot Ikilei. “This is not happening in faraway nations or dystopian novels, this is happening in our homes, in our schools, in our workplaces.

“We are losing the greatest nation in the world, and the brutality of this increasingly authoritarian government is being ushered in with hollow words such as “kindness,” “transparency,” “us.”

“The targeting of conservatives and their families is causing a growing number of New Zealanders to recognise the deliberate destruction and replacement of New Zealand’s founding values with an ideology that should never be allowed to infect our society,” concludes Ikilei. “This election year, we either take back what we have lost, or we lose the rest of what we have.”

I can be thankful that I do not hold a gun licence. In the past I have had a cyanide use licence, a firearms licence and an explosives licence (in Auz)

If I get a knock on the door, the gopro is at the door waiting.