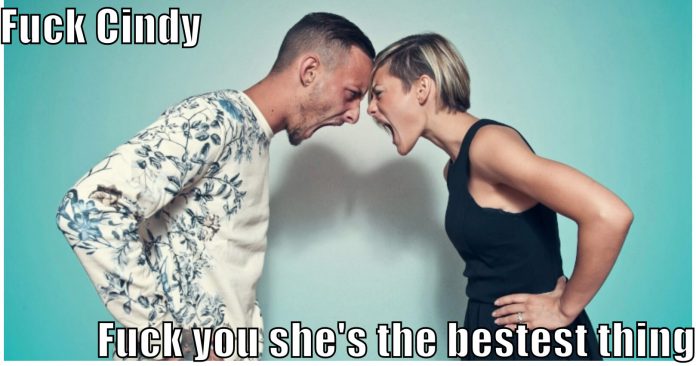 I wonder how many time this is happening here in New Zealand. The Cindy affect will be strong in the woke amongst us.

Many Couples Arguing More About Trump Than Finances

Her husband’s steady shift to the political right during their 24-year marriage was a source of frustration and embarrassment for liberal Jennifer Merrill, but it wasn’t until the election of Donald Trump — and her husband’s support for the president — that she’d finally had enough.

Merrill moved out and filed for divorce.

“I just couldn’t see sharing a bed with somebody that agreed with what Trump was doing when I was so against everything that Trump represented,” says Merrill, a book editor for a trade association, and the mother of three children. “He had no sensitivity for how I felt, that I felt so strongly about it, especially when I was going out and doing protests … and he would just laugh about it and continue to defend [Trump]. So that just made me very, very angry.”

Merrill is among 11% of Americans who have ended a serious relationship due to political differences, according to a 2017 poll. One in 5 Americans say they know a couple whose marriage or relationship has been negatively affected by President Trump’s election.

“Among Americans in a committed relationship who voted differently in 2016 than their significant other, 41% say they and their partner disagree or argue about politics more than ever,” says Nathan Richter of Wakefield Research, a self-described nonpartisan firm that conducted the study.

Various polls show the country is deeply divided when it comes to President Trump and whether he should have been impeached. The study results suggest there is a very real human toll to the divisiveness and rancor that has gripped the nation since the president’s election.

Virginia attorney Anita Jo Shifflett, who voted for Trump, says she and her husband, Douglas Williams, a committed Democrat, argue over politics pretty much every time they watch the news together. The couple married in 2015.

“He was aware that I was a Trump supporter, that I voted for Trump, and I was aware he was a Democrat to the core when we were dating, so it’s kind of something we just knew about each other and accepted. It hasn’t really been a big issue for us,” Shifflett says.

But that doesn’t mean their political differences don’t cause friction.

“He likes to bash Trump. You know, he likes to call him names and all that stuff,” Shifflett says. “He’s really angry about it. When he criticizes Trump I feel like I’ve heard it before. Again and again, and I heard it the first time. You don’t need to keep repeating it to me.”

Shifflett’s experience isn’t unique, according to Wakefield’s research, which finds that 1 in 5 couples now argue more about Trump than they do about money. Finances are traditionally the biggest cause of strife in a relationship.

“To see that is superseded by disagreements over views on President Trump is very notable,” says Richter of Wakefield Research. “That’s a way to sort of put this trend in context, to show just how passionate that 21 percent is on that issue.”

The so-called Trump effect seems to hit millennials the hardest. The Wakefield study found that 22% of people in their 20s and 30s report breaking up with someone over political differences. That’s double the rate of the general population. And almost 1 in 3 millennials say they know a couple whose marriage has been negatively affected by President Trump’s election.

J.D. Dobson was a Republican staffer working on Capitol Hill when he met his future wife, Katie Dobson, a Democrat. The St. Louis, Missouri, couple used to argue over gun control. After 11 years of marriage and two children, J.D. says his political views have shifted somewhat. Although he still considers himself a conservative, he is not a supporter of President Trump.

“I think our general outlook on the world was pretty similar even though our partisan affiliation was different,” J.D. says. “But I will tell you with certainty that if I woke up tomorrow and decided that I was pro-Trump, it would threaten our marriage.”

“The kids would be in the car,” Kate says with a laugh. “I mean, should I leave a note or would you know what it was?”

Merrill, the woman who left her husband after Trump’s election, maintains a good relationship with her ex — as long as they don’t discuss politics, religion or gun control. Merrill says there were other issues in her marriage. She’d had a growing sense that she and her partner of 24 years weren’t particularly compatible.

But would she still be married if Donald Trump hadn’t been elected president?

“If Hillary [Clinton] had won, maybe we would still be married. Maybe we’d still be together,” Merrill says. “That’s hard to say because we did have other problems, and I feel like Trump was just the last piece that made me go. So if he wasn’t president, maybe I would still be there, but I’m not 100% sure.”

Previous articleSquirrels Anyone?
Next articleHave Your Say

Prince Harry: ‘Trump Supporters Planning To Assassinate Me and Meghan’ Prince Harry has warned that Trump supporters want to assassinate him, his wife Meghan and...
Read more
Freedom of Speech