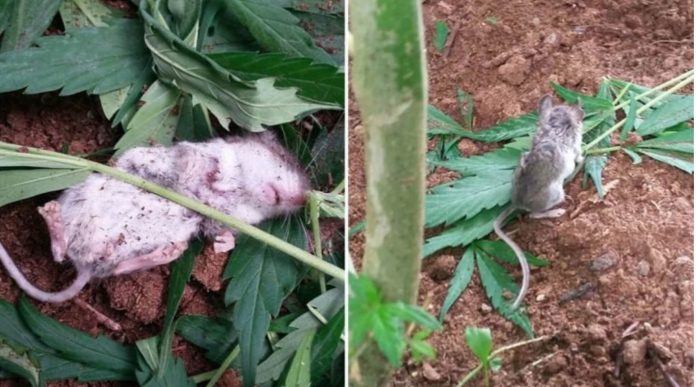 A country mouse was found passed out on its back after munching on Cannabis leaves.

Canada’s Cannabis Act, (aka Bill C-45) was passed by the House of Commons of Canada on June 19, 2018, legalizing cannabis for recreational use across the country effective from October 17, 2018. The bill stipulates the minimum age of 19 to use, buy, grow or possess cannabis for recreational use and that it must not be consumed in a public place or in a motor vehicle.

All good and well, except for a country mouse obviously not schooled on the law, found passed out on its back after munching on Cannabis leaves.

Colin Sullivan from New Brunswick found the little fellow stealing leaves off his plants on two consecutive days and realized the rodent may have a problem. Sullivan captured the mouse on camera while in action nibbling the stems of plant leaves and its effects on the little guy.

Sullivan decided to isolate the mouse in a Perspex cage and start him on a ’12 step program’, primarily to keep him away from the plants, clear his head and get him back on his feet for release in the wild.

He posted on Facebook last week Tuesday, writing: ‘‘For two days in a row I’ve caught this little pothead taking leaves off of my plant and eating them until he passes out.

‘’He’s missing an ear so it may be self medication for his PTSD but I still think it’s time for an intervention.

‘’I’ll let him sleep this one off but when he wakes up he’s getting a real stern talking to.’’

An update followed two days later, showing the mouse in a Perspex cage and explaining the situation:

‘’So it’s been a couple of rough days for our little baked buddy here and despite a belly ache and a wicked bad case of the munchies I think he’ll make a full recovery.

He’s been weaned to one medium leaf per day and seems to be adjusting well.

After a short stint in ‘rehab’ for his furry friend, Sullivan advised on his post that the mouse was ready to be released back in the wild and, as a farewell, wrote a pun laden ode to his new buddy:

‘’On The Rodent To Redemption.

After a long and desperate battle with addiction this little mouse has grinded up his struggle, picked out the seeds and stems and is ready to roll out. Weed all benefit from joining together to help the smoke clear in any addict’s life.

He did his very cannibest and was awarded his first Twelve Step chip. I may have been the one to open his cage but he was the one who set himself free. So long my friend, till we meet again.’’

Not surprisingly, the posts received over 12,000 likes and attracted thousands of comments ranging from concern for the little mouse to wishing him well in his efforts to stay sober.

How To Grow Your Own Out Of This World Cannabis Bonsai Tree Growers have experimented with creating cannabis bonsai, primarily to produce clone clippings from...
Read more
Cannabis Referendum