You Stupid Boy
Home US Politics Presidential Election Wasn’t ‘Rigged’; It Was ‘Fortified' 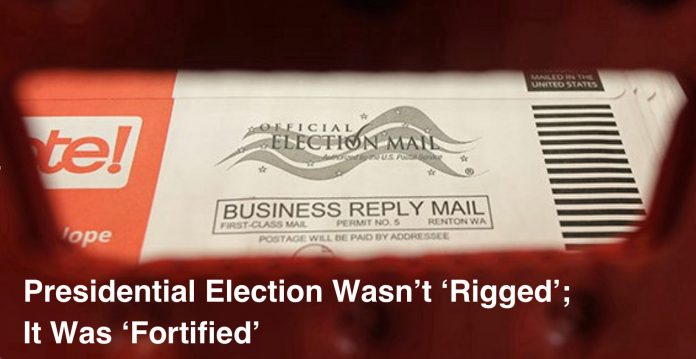 NOW THEY BRAG ABOUT HOW THEY STOLE THE ELECTION

Time magazine has published a detailed account of what it describes as a “conspiracy” between “left-wing activists and business titans” to create “an extraordinary shadow effort” to “protect” the 2020 presidential election.

Time has published an explainer piece offering a fascinating insight into how the presidential election was won. It’s titled “The Secret History of the Shadow Campaign that Saved the 2020 Election.”

The fascinating part is what it tells us about the brazenness of the left in general and the corrupt, mendacious MSM in particular: they are now heavy-hinting that they cheated but want you to know that it’s all OK because they were doing it to not to destroy democracy but to preserve and enhance it.
Here’s the key paragraph:

That’s why the participants want the secret history of the 2020 election told, even though it sounds like a paranoid fever dream–a well-funded cabal of powerful people, ranging across industries and ideologies, working together behind the scenes to influence perceptions, change rules and laws, steer media coverage and control the flow of information. They were not rigging the election; they were fortifying it. And they believe the public needs to understand the system’s fragility in order to ensure that democracy in America endures.

Do you see what they just did there?

The Democrats (and their sympathisers) didn’t rig the election. They just fortified it by taking care to ensure the right guy won rather than the wrong guy won, regardless of what those pesky voters might misguidedly have wanted.

Could this have anything to do, you wonder, with President Trump’s upcoming impeachment trial?

My suspicion that Time’s piece is both pre-emptive strike and damage limitation exercise. It anticipates the possibility that Trump will provide evidence in support of his claim that the election was “stolen.”

This evidence will be much harder to brush under the carpet in the Senate.

I’m reminded here of an old article from the Times (of London), which described the process whereby political projects are advanced by stealth.

This is where we are headed now with the”‘stolen” election. Columnists who blithely assured us that the election was above board may now begin to finesse their position.

“OK, so maybe it was rigged,” they will start to concede. ‘But isn’t that always the case with elections? And anyway it’s a done deal now.”

Sorry, my bad — that use of the word “rigged” was a complete slip of the tongue.

What I meant to say is that the presidential election was “fortified.” And what’s not to like about that, eh?

Watch them running scared like the rats they are, once Trump gets going at his impeachment trial. Trump has nothing to lose and all to gain. Is it any wonder the Rhinos are joining the Dems in trying to control this sham trial.