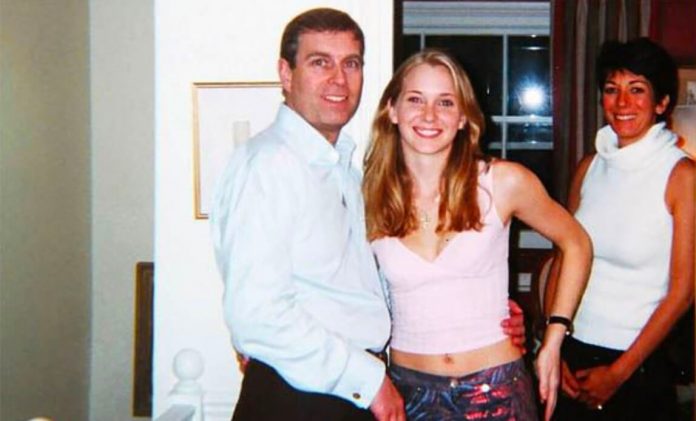 The U.S. Department of Justice has formally told the U.K. for the first time that Prince Andrew is part of a criminal probe springing from his links to now-deceased pedophile Jeffrey Epstein. Prince Andrew, unlike his mum Queen Elizabeth II, does not hold sovereign immunity from prosecution. He can be forced to appear in a British court to answer questions.

Talk about a diplomatic nightmare. If you watched Netflix’s Jeffrey Epstein: Filthy Rich, as I did, you know that Prince Andrew isn’t an innocent bystander who was caught up in a wide-ranging investigation into the criminal charges against Epstein. He was a friend and benefitted from the friendship, at least when it came to enjoying the hospitality of Epstein in his homes and the trafficked young girls his lifestyle brought.

Andrew has admitted being pals with Epstein since 1999 after being introduced by socialite Ghislaine Maxwell.

Epstein was a guest at Ghislaine’s birthday party at Sandringham.

He also attended Beatrice’s 18th birthday party at Windsor Castle, just two months after a warrant was issued for his arrest for sexual assault of a minor.

Andrew and Epstein met on at least ten occasions and the Duke stayed over at Epstein’s New York mansion, Palm Beach home and on a private island in the US Virgin Islands.

The prince has maintained all along he is innocent of any wrongdoing. During his infamous television interview with the BBC last November, he said he would cooperate with an American investigation if “legal advice was to do so”. But, he hasn’t cooperated so far and the Southern District of New York leading the Epstein inquiry is fresh out of patience. In January U.S. Attorney Geoffrey Berman leading the inquiry said Prince Andrew “provided zero co-operation”. Then, two months later, Berman said the Duke had “now completely shut the door on voluntary co-operation”. He warned that the office was considering its options.

Team Andrew hits back against claims that there has been no communication with Berman’s office and Berman admits “communications through his attorneys”. Nonetheless, Randy Andy is “not willing to submit to an interview”. So, the U.S. Department of Justice has invoked the terms of a mutual legal assistance treaty with Great Britain in order to question Prince Andrew as a witness. The Sun reports the request was “formally lodged by the DoJ last month under the terms of a 1994 MLA treaty.”

“The DoJ does not make a request of this nature lightly, especially one involving a senior member of the British royal family.

“It puts the UK government in a very difficult position – and the Duke of York even more so.”

If the request is granted, U.S. prosecutors have two options.

The first, typically only used for witnesses to crimes, would see the Duke asked to voluntarily attend an interview and give a signed statement. Crucially, this would NOT be under oath.

But sources say angry American investigators – frustrated at what they see as a lack of cooperation from the Queen’s son to date – have the power to pursue an explosive second route.

That would see Andrew asked to attend London’s City of Westminster Magistrates’ Court to provide oral or written evidence on oath.

If he refused, the Duke could be forced to attend in person by summons, with DoJ lawyers able to quiz him.

But any evidence session could be held “in camera” – privately, with no press or public present.

He would still have the right to “take the Fifth” by staying silent to avoid self-incrimination.

The DOJ is declining to comment, as is Buckingham Palace. Britain’s Home Office said they do not comment on the existence of MLA requests. The Duke’s legal team responded to the Sun’s report.

“Legal discussions with the DOJ are subject to strict confidentiality rules, as set out in their own guidelines,” a source close to the prince’s legal team said in response to the Sun report.

“We have chosen to abide by both the letter and the spirit of these rules, which is why we have made no comment about anything related to the DOJ during the course of this year. We believe in playing straight bat.”

And there is more pushback from Andrew’s legal team as the day goes on. They say Berman is just seeking publicity.

Andrew’s lawyers, Clare Montgomery and Stephen Ferguson, said that Justice Department officials had given them “unequivocal assurance” that their discussions with investigators would remain confidential.

But they suggested that Berman’s public statements on the case were “seeking publicity rather than accepting the assistance proffered.”

And lawyers said that Andrew has been told by the DOJ that he is not, nor ever was, a “target” of the criminal probe.

“Far from our client acting above the law, as has been implied by press briefings in the U.S., he is being treated by a lower standard than might reasonably be expected for any other citizen,” Andrew’s lawyers said.

So, what do we think Prince Andrew will do? His barrister (lawyer) Clare Montgomery is known as a top barrister who previously represented Chilean dictator General Pinochet, so Prince Andrew shouldn’t be a challenge, right? He can plead the Fifth and never say a word in a court of law, or under oath anywhere.