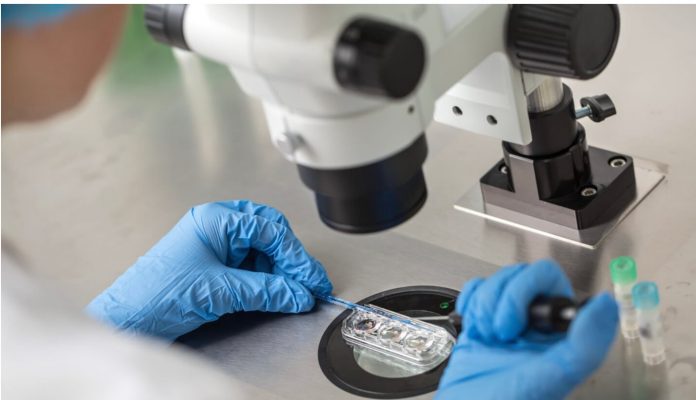 I’m hearing stories of weird things happening in IVF clinics starting in March of this year. Apparently, they can’t figure out the cause. I just got off the phone with a woman who works at a large IVF clinic. She has to remain nameless to avoid being fired for speaking out. Nobody is supposed to know about the serious problems happening in the IVF clinics.

Let me tell you what is really going on and the scientific study that explains it.

Rest assured that the so-called “fact checkers” will call the IVF clinics who will deny there are any problems at all. “Nothing to see here folks, move along!”

So you’ll have to decide who you want to believe.

No Clue Why Miscarriage Rates Doubled From March Through May

It seems that they’ve been having a series of problems starting in March, 2021 that they just cannot figure out and have never seen before. Although my informant believes it is the vaccine (which of course is why I got the call), she says that the PhD they employ there to investigate the problem is looking at “every possible variable” to figure out why there was suddenly a doubling of the miscarriage rate (in March through May).

Nothing was common to all these women. Nothing. She couldn’t figure out the cause.

The PhD never even considered the shots as a possible variable – she refused to look at it when it was mentioned as really the only environmental change for all their patients. And because none of the other variables panned out as being a cause, she called the miscarriage increase a “fluke.”

The IVF clinics start having problems starting in March. And they’ve talked to other IVF clinics who are having similar problems.

The problems in Utah are document in this 42-page report produced by HEALTH INDEPENDENCE ALLIANCE.

Here are a few highlights from the report:

Here is a sample of some of the problems they’ve had. I’ll add to this list over time as I get more data, but I wanted to share this with you now.

Note: they do NOT track the vaccination status of any of the women or men involved in the IVF process since they believe that the vaccines are safe and effective. I just wanted to point that out in case you were curious.

They don’t want to alarm anyone or discourage anyone from getting these “safe and effective” vaccines. It’s all being discussed in private chat rooms between the IVF clinics. My informant would be fired if they found out who she was.

Finally, the embryologist at one clinic was heard saying “All the unvaxed deserve to die.” Wow. You really can’t make this stuff up.

What Happened In Singapore?

I’ve written in the past about the famous Singapore study that was deliberately gamed so that the conclusion (which determined the vaccines were dangerous to women) would not panic anyone.

Essentially, the vaccine creates antibodies that attack a protein (syncytin-1) which is essential for placenta formation.

In plain English, what they found is that the vaccine should be avoided if you are trying to have a baby.

There is a substack article What happened in Singapore showing the antibody response to syncytin-1 is real and harmful. Mike Yeadon and Dr. Wolfgang Wodarg raised an alarm in Item XI of their petition to halt the Covid vaccine in December that it may induce an antibody response to syncytin-1, which is essential for placenta formation. The Singapore study authors set up their study to “dispel” this insinuation.

Brian Mowrey wrote the article to explain the testing system and why the result the authors’ study found is a giant warning that the fears they were trying to dispel are valid. In short there is a lot we do not know about the effects of the vaccines on reproductive health and what we know is troubling enough that they should not be recommended for anyone looking to have a baby.

Brian Mowrey’s substack article was written on Jun 23, 2021, about a month after the Singapore study was published.

It’s now December 15, 2021. There was only one person who commented on the article and 5 likes. That’s why nobody knows about this. It’s been suppressed.

So nobody is going to connect the dots here… unless they read my substack of course.

Just an addendum that it will be hard to get anyone mainstream to even read this article.

In my case, I’d estimate that close to 90 percent of the people doing medical research that I know now refuse to talk to me because I don’t think the vaccines are safe (so I must be an evil person). Around five percent agree with me. And there are five percent are in the middle who will talk to me about anything except the vaccines and masking.

They do not want to even hear that they might be wrong. I suggested that they might want to check out my substack articles just so they can see what they have been missing, but I get a polite “no thank you” to my offer.

This is why the scientific community is so stuck on their beliefs. They basically are very proficient at filtering out any information that doesn’t align with their beliefs.

Previous articleHave Your Say
Next articleOmicron A Man Made virus?