You Stupid Boy
Home Lifestyle "Queen of the Ocean"

“Queen of the Ocean” 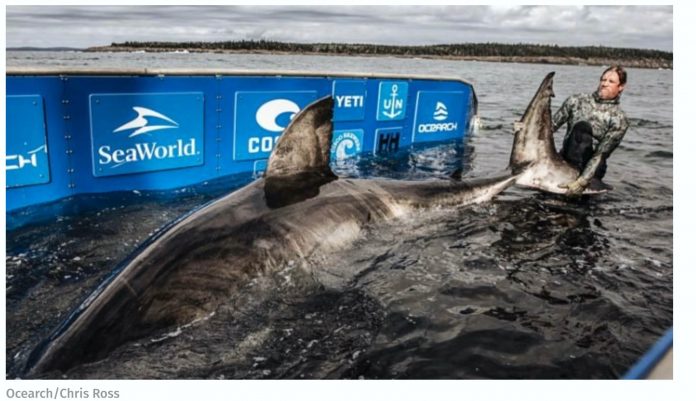 A massive great white shark weighing in at 3,500 pounds and spanning over 17 feet has been captured by researchers off the coast of Nova Scotia in eastern Canada.

The tremendous shark was captured on Friday by a team of researchers with NGO group OCEARCH. Scientists have described the female shark as the “Queen of the Ocean.”

“We named her ‘Nukumi’, pronounced noo-goo-mee, for the legendary wise old grandmother figure of the Native American Mi’kmaq people,” the group wrote in a Facebook post Saturday.

The indigenous Mi’kmaq culture is deeply rooted in the Nova Scotia region, the group added.

“With the new data we’ve collected, this matriarch will share her #wisdom with us for years to come,” OCEARCH added.

The expedition was led by Chris Fischer, who said that Nukumi was the largest shark ever tagged by his group, measuring in at a mammoth 17 ft, 2 inches, and weighing 3,541 pounds.

In video shared by OCEARCH, Nukumi can be seen lying on a specialized submersible platform built on the side of its research vessel before swimming away as researchers watch.

OCEARCH is devoted to collecting data on maritime creatures and has tagged and collected samples from hundreds of sharks, seals, dolphins, and other animals as a means to gain insights on migration patterns and uncover details about shark lives that were previously unknown.

According to Fischer, the team could already tell that Nukumi was a “matriarch” shark that has enjoyed a long and “rich” life.

“She is a very old creature, a proper Queen of the Ocean and a matriarch,” he told McClatchy.  “She has all the scars, healed wounds and discolourations that tell a deep, rich story of her life going back years.”

“You feel different when you’re standing beside a shark of that size compared to the ones in the 2,000-pound range,” Fischer added. “It’s an emotional, humbling experience that can make you feel small. You feel insignificant standing next to such an ancient animal.”

Great white sharks are the world’s largest predatory fish and are known to tear chunks from the flesh of their prey, according to the World Wildlife Federation. While great whites have roughly 300 teeth, they do not chew their food but instead, rip their prey into mouth-sized pieces which are then swallowed whole.

Great whites feed on a massive spectrum of prey, ranging from small fish such as halibut to large seals and dolphins. They have no known predators, although on rare occasions they have been preyed upon by orcas.

Great white sharks in the North Atlantic are migratory creatures whose move great distances when the seasons change. During the winter, great whites migrate thousands of miles to warmer waters further south, while many mature adult great whites also venture into the open ocean for blocks of several months, swimming tens of thousands of miles and diving to depths of up to 1,000 meters in search of their prey.

While great white sharks have a fearsome reputation, due in part to the Jaws films, the sharks are a vulnerable species whose numbers have been steadly dwindling over the years.

Previous articleWatch the lefties scream!
Next articleHave Your Say