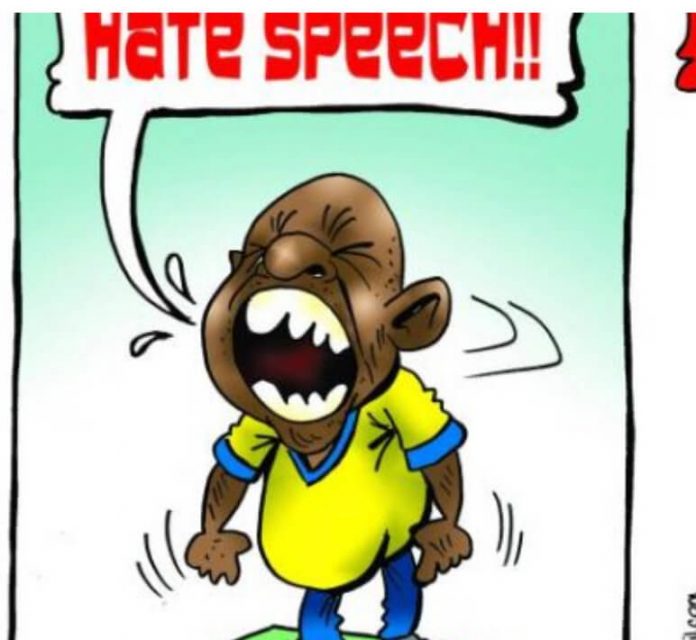 Received the following from a poster on YSB. It’s from the 1law4all website.

More and more I’m finding that the terms ‘hate’, “hate speech”, ‘haters’ are all names or labels thrown at people, usually on the right, who express views that are disliked by people, usually on the left, with opposing views. Much like terms such as ‘racist’, ‘white privilege’ and ‘white supremacist’. If you do not agree, or go along with the current fashionable ideology, you are, apparently, all these things.

Of course, like all such terms, it is nonsense. I disagree with many people, including members of my own family and friend circle. It does not mean I hate any of them. Nor does it mean I feel superior to any of them. I simply have a different opinion, and that’s OK.

But when it comes to politics, any views other than those cherished by the current lot of idealogues is a threat to their ambitions of wealth and power and must be shut down, canceled, derided and ridiculed at all costs. This has become glaringly obvious recently in their treatment of Lee Williams who dared to stand up and speak out on his views. How dare he have an opinion of his own and want to share it with other people? Something our Bill of Rights says we have every right to do.

The ironic thing about all this is that the fear, hate and racism comes from the other side. From the ones who yell those accusations at the people on the right the loudest. They are riding a wave at the moment, and they are terrified of it breaking on the beaches and scattering them like sand. And if there is any justice in the world, it will. Because that wave is propped up by lies, misinterpretations, Chinese whispers and cultural fantasy. It cannot stand up to the rigour of investigation or scientific research, both of which are missing entirely.

Unfortunately, this tragic situation is not only just supported, but also promulgated, by our politicians, mainstream media and activist judges in our courts. I’m sure each one has their own reasons and agendas, but that does not make it right or just, and time will tell what will happen to them.

But this article is about ‘hate’ so I won’t go down the other rabbit holes here.

The following images are screenshots taken mostly from discussions on FaceBook. I apologise in advance as some of the language is vile, but to hide it would remove the impact of the ‘hate’ being emitted by the people typing such things. Look carefully at the profile images and names of the people spewing the hateful and racist comments. Go look them up on FaceBook if you like, and see what kind of people they are. Don’t say anything to them. Just observe. You do not want to lower yourself to their level. But notice from which side the real hate and racism is coming from. Make up your own mind on who the haters and racists are. 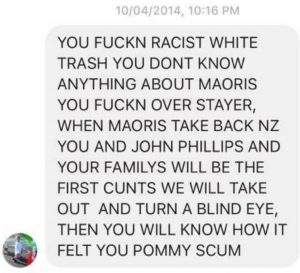 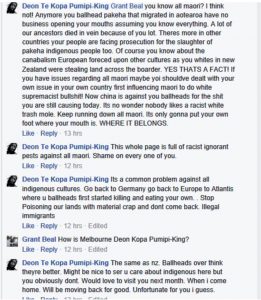 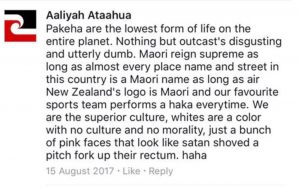 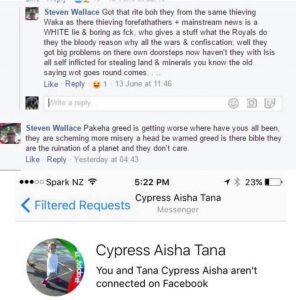 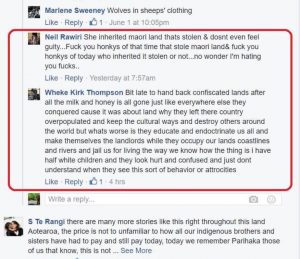 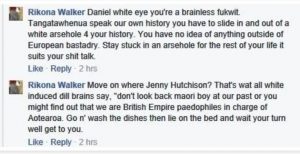 Some of that is pretty hard on the eyes! I have more, a lot more. But you get the idea I am sure.

I believe the reason some Maori have such hatred toward Europeans is a direct result of the Waitangi Tribunal claims industry and the Maori Sovereignty movement. Maori activists have used lies, twisted history, false interpretations of the Treaty of Waitangi, and made-up atrocities to bolster claims to the Waitangi Tribunal and to the Government and Courts.

In order for their claims to succeed it is necessary to have a population in lower socio-economic circumstances who they portray as victims of colonisation and it’s long-reaching effects on their people. For these claims to be able to continue for generation after generation, they need a population of angry, radicalised activists to keep up the fight for those generations and into the future.  Tragically, the lies, twisted history and other falsehoods are now considered facts by the generations following the original claimants. It’s no wonder, when fed on a diet of hate and lies about Europeans all their lives, that they exhibit such ignorance of our history and anger, hate and suspicion toward ‘pakeha’.

But tell me, how comfortable would you be with people like this in power?