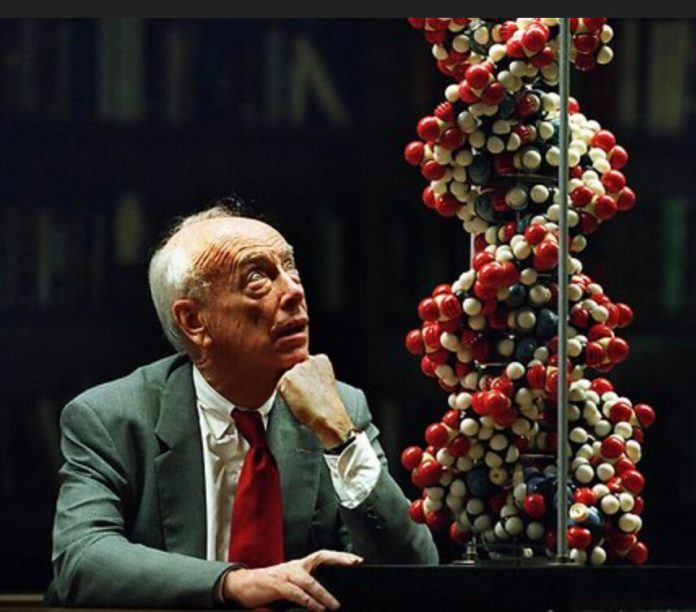 Some truths will only get you cancelled, ‘cos the left denies them.

Walter Isaacson, the respected biographer of Steve Jobs, has turned his talents to Jennifer Doudna, who won last year’s Nobel Prize in Chemistry for coinventing the CRISPR gene editing technique.

In his The Code Breaker: Jennifer Doudna, Gene Editing, and the Future of the Human Race, the scientist emerges as competent and competitive. But this best-seller’s most compelling personality turns out to be her canceled but unrepentant inspiration, James D. Watson, whom Isaacson and Doudna visit in his internal exile in 2019. … 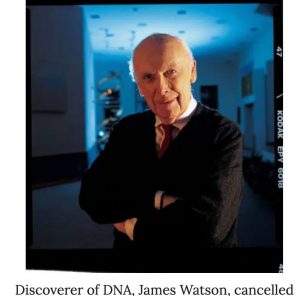 All this raises a question of current interest that Isaacson dances close to but tries to avoid. Isaacson’s assumption that genetics plays a role in IQ treads perilously close to the crimethink about the world’s most intractable IQ reality, the gap on average between sub-Saharan Africans versus East Asians and Caucasians that got James D. Watson, America’s most distinguished man of science, canceled in 2007. Watson told The Times of London:

He says that he is “inherently gloomy about the prospect of Africa” because “all our social policies are based on the fact that their intelligence is the same as ours — whereas all the testing says not really.”

The cadre of high-caliber intellects who are profiled in The Code Breakers know a lot more about the realities of IQ, race, and genetics than do the midwits who canceled Watson. So for the great man’s 90th birthday a benefit celebration was organized at which [Joe Biden’s wily science adviser Eric Lander] made a gracious toast to Watson. But when the usual Twitter dopes went nuts with hate, Lander cravenly condemned Watson for his realism and even implied that Watson was anti-Semitic. …

When PBS made an American Masters documentary about Watson in 2018, they gave him the chance to renounce his observations about race and IQ. Heroically, he told the truth as he sees it:

“I would like for them to have changed, that there be new knowledge that says that your nurture is much more important than nature,” he said as the cameras rolled. “But I haven’t seen any knowledge. And there’s a difference on the average between blacks and whites on I.Q. tests. I would say the difference is, it’s genetic…. It should be no surprise that someone who won the race to find the double helix should think that genes are important.”

My view is that intelligence, race, and genetics make a very complex subject, and that it has yet to be proven that the sizable average IQ gap between, say, sub-Saharans and Ashkenazis is driven in part by a genetic component. But at present, that seems to be the way to bet.

In any case, we will know for sure soon enough.

I don’t know why stupid people are so intent at the moment on doubling down on their hateful behavior toward smart people like Watson, when the odds are they will be proven very wrong in the not-too-distant future…

Other than that they are stupid and hate-filled.

Speaking of such, The New York Times’ lowbrow science denialist Amy Harmon then had Watson put on Double Secret Cancellation. Amusingly, the snitch later revealed that she is peeved that every time she does another touchdown dance on Twitter over having the nonagenarian great man canceled, nobodies tweet back at her what Galileo is thought to have stubbornly muttered after his conviction for asserting that Earth goes around the sun: “And yet, it moves.” …

Is Watson’s inability to mislead for political reasons related to his scientific accomplishments?

In 2019, Watson was banned from setting foot in the seminar series he’d founded at Cold Harbor, so Isaacson and Doudna went to see him. Although he’d recently been hospitalized after a car crash, his mind was sharp. …

“I think my blunt and contrary nature helps my science, because I don’t simply accept things just because other people believe it,” he says. “My strength is not that I’m smarter, it’s that I’m more willing to offend the crowd.”…

Was that the case I ask, with his comments on race and intelligence?…

“I couldn’t deny what I believed,” he tells me…. “I always follow my father’s advice of saying the truth,” he replies. “Somebody has to say the truth.”

The left are so medieval. They put on the coat of science, but act like witch doctors.

Reading this has changed my ideas on the use of mRNA to fight viruses. The problem with the COVID-19 vaccines has been the haste in their introduction without proper long term trials.

Previous articleAfraid Of The Truth About Vitamin D?
Next articleHave Your Say