Reason # 25 for Liarbour not to contest the election 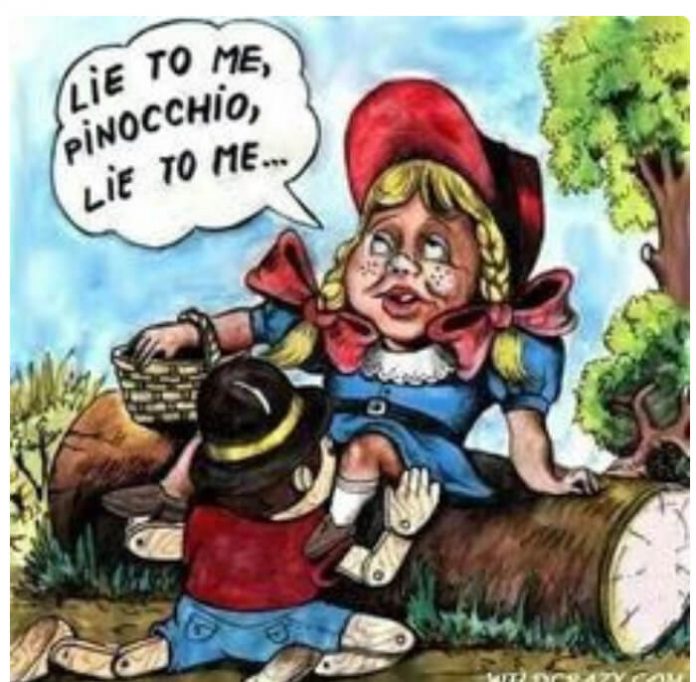 Pathological liars: about 13% of people tell 10 lies per day

A new study has found that 13% of people think of themselves as pathological liars, or say that others consider them to be pathological liars. Those 13% reported telling about 10 lies per day. (Remind Cindy not to look at this)

The study, published in the journal Psychiatric Research and Clinical Practice, included 623 people. The researchers recruited them in 2019 from various mental health forums, social media, and a university.

The participants spanned a range of ages, ethnicities, education levels, and income levels. The researchers asked them whether they thought of themselves as pathological liars, or if others thought of them that way. The respondents also took a lie frequency assessment and other questionnaires.

The study found the pathological liars were more likely to experience distress and impaired functioning, especially in social relationships. This diminished functioning also applied to legal contexts, work, and finances. Their distress often had to do with worries about whether their lies would be be discovered.

The pathological liars in the group also reported telling lies for no specific reason. Likewise, they said many of their lies grew out of an initial lie.

The majority of participants in the pathological liars group indicated that their problematic lying began during adolescence. People in this group were also more likely to say their lying was out of their control, indicating a kind of compulsiveness. Likewise, people in this group said they felt less anxious after lying.

The phenomenon of the “pathological liar” was first recorded in 1891 by psychiatrist Anton Delbrück. He initially called it pseudologia phantastica, and used the term to describe people who told so many outrageous lies that their behavior could be considered pathological.

Since then, research into pathological lying has been surprisingly scant. One analysis of prior case studies found pathological lying equally represented among men and women, with the IQs of the liars in the average to above average range. (False News)

Pathological lying has not (yet) been classified as a diagnostic entity in either the DSM-5 or the ICD-10, but the researchers behind the present study are hoping to change that. As they write, “we suggest that PL should be defined as a persistent, pervasive, and often compulsive pattern of excessive lying behavior that leads to clinically significant impairment of functioning in social, occupational, or other areas.”

Pathological lying also causes distress, they say, and poses a risk to the self or others; an example of this risk is if a pathological liar conceals the presence of suicidal thoughts.

Formal recognition of pathological lying as a disorder would bring many benefits, as researchers would then be better able to examine its features and causes. And effective treatments, such as cognitive-behavioral therapy and possibly pharmaceutical drugs, could then be more thoroughly investigated.

Thousands of troops along Biden’s motorcade path turned their backs on him yesterday Humiliating for Creepy Joe. God bless our soldiers who protect and...
Read more
Climate Change Bullshit