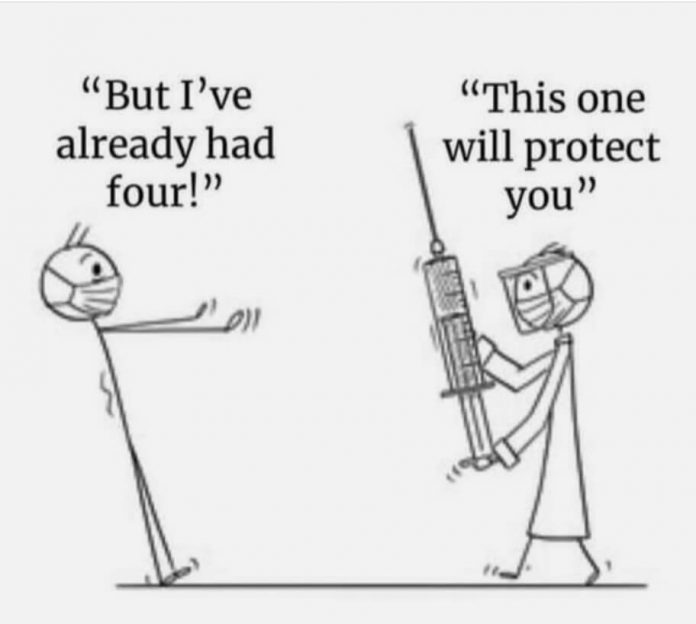 Written by The British Medical Journal

In autumn 2020 Pfizer’s chairman and chief executive, Albert Bourla, released an open letter to the billions of people around the world who were investing their hopes in a safe and effective covid-19 vaccine to end the pandemic. “As I’ve said before, we are operating at the speed of science,” Bourla wrote, explaining to the public when they could expect a Pfizer vaccine to be authorised in the United States.1

But, for researchers who were testing Pfizer’s vaccine at several sites in Texas during that autumn, speed may have come at the cost of data integrity and patient safety. A regional director who was employed at the research organisation Ventavia Research Group has told The BMJ that the company falsified data, unblinded patients, employed inadequately trained vaccinators, and was slow to follow up on adverse events reported in Pfizer’s pivotal phase III trial.

Staff who conducted quality control checks were overwhelmed by the volume of problems they were finding. After repeatedly notifying Ventavia of these problems, the regional director, Brook Jackson, emailed a complaint to the US Food and Drug Administration (FDA).

Jackson has provided The BMJ with dozens of internal company documents, photos, audio recordings, and emails.

On its website Ventavia calls itself the largest privately owned clinical research company in Texas and lists many awards it has won for its contract work.2 But Jackson has told The BMJ that, during the two weeks she was employed at Ventavia in September 2020, she repeatedly informed her superiors of poor laboratory management, patient safety concerns, and data integrity issues.

Jackson was a trained clinical trial auditor who previously held a director of operations position and came to Ventavia with more than 15 years’ experience in clinical research coordination and management. Exasperated that Ventavia was not dealing with the problems, Jackson documented several matters late one night, taking photos on her mobile phone. One photo, provided to The BMJ, showed needles discarded in a plastic biohazard bag instead of a sharps container box.

Another showed vaccine packaging materials with trial participants’ identification numbers written on them left out in the open, potentially unblinding participants. Ventavia executives later questioned Jackson for taking the photos.

Early and inadvertent unblinding may have occurred on a far wider scale. According to the trial’s design, unblinded staff were responsible for preparing and administering the study drug (Pfizer’s vaccine or a placebo). This was to be done to preserve the blinding of trial participants and all other site staff, including the principal investigator.

However, at Ventavia, Jackson told The BMJ that drug assignment confirmation printouts were being left in participants’ charts, accessible to blinded personnel. As a corrective action taken in September, two months into trial recruitment and with around 1000 participants already enrolled, quality assurance checklists were updated with instructions for staff to remove drug assignments from charts.

In a recording of a meeting in late September2020 between Jackson and two directors a Ventavia executive can be heard explaining that the company wasn’t able to quantify the types and number of errors they were finding when examining the trial paperwork for quality control. “In my mind, it’s something new every day,” a Ventavia executive says. “We know that it’s significant.”

Ventavia was not keeping up with data entry queries, shows an email sent by ICON, the contract research organisation with which Pfizer partnered on the trial. ICON reminded Ventavia in a September 2020 email: “The expectation for this study is that all queries are addressed within 24hrs.” ICON then highlighted over 100 outstanding queries older than three days in yellow.

Examples included two individuals for which “Subject has reported with Severe symptoms/reactions … Per protocol, subjects experiencing Grade 3 local reactions should be contacted. Please confirm if an UNPLANNED CONTACT was made and update the corresponding form as appropriate.”

According to the trial protocol a telephone contact should have occurred “to ascertain further details and determine whether a site visit is clinically indicated.”

Documents show that problems had been going on for weeks. In a list of “action items” circulated among Ventavia leaders in early August 2020, shortly after the trial began and before Jackson’s hiring, a Ventavia executive identified three site staff members with whom to “Go over e-diary issue/falsifying data, etc.” One of them was “verbally counseled for changing data and not noting late entry,” a note indicates.

At several points during the late September meeting Jackson and the Ventavia executives discussed the possibility of the FDA showing up for an inspection (box 1). “We’re going to get some kind of letter of information at least, when the FDA gets here . . . know it,” an executive stated.

A History Of Lax Oversight

When it comes to the FDA and clinical trials, Elizabeth Woeckner, president of Citizens for Responsible Care and Research Incorporated (CIRCARE),3 says the agency’s oversight capacity is severely under-resourced. If the FDA receives a complaint about a clinical trial, she says the agency rarely has the staff available to show up and inspect. And sometimes oversight occurs too late.

In one example CIRCARE and the US consumer advocacy organisation Public Citizen, along with dozens of public health experts, filed a detailed complaint in July 2018 with the FDA about a clinical trial that failed to comply with regulations for the protection of human participants.4 Nine months later, in April 2019, an FDA investigator inspected the clinical site.

In May this year the FDA sent the triallist a warning letter that substantiated many of the claims in the complaints. It said, “[I]t appears that you did not adhere to the applicable statutory requirements and FDA regulations governing the conduct of clinical investigations and the protection of human subjects.”5

“There’s just a complete lack of oversight of contract research organisations and independent clinical research facilities,” says Jill Fisher, professor of social medicine at the University of North Carolina School of Medicine and author of Medical Research for Hire: The Political Economy of Pharmaceutical Clinical Trials.

A former Ventavia employee told The BMJ that the company was nervous and expecting a federal audit of its Pfizer vaccine trial.

“People working in clinical research are terrified of FDA audits,” Jill Fisher told The BMJ, but added that the agency rarely does anything other than inspect paperwork, usually months after a trial has ended. “I don’t know why they’re so afraid of them,” she said. But she said she was surprised that the agency failed to inspect Ventavia after an employee had filed a complaint. “You would think if there’s a specific and credible complaint that they would have to investigate that,” Fisher said.

In 2007 the Department of Health and Human Services’ Office of the Inspector General released a report on FDA’s oversight of clinical trials conducted between 2000 and 2005. The report found that the FDA inspected only 1 percent of clinical trial sites.6 Inspections carried out by the FDA’s vaccines and biologics branch have been decreasing in recent years, with just 50 conducted in the 2020 fiscal year.7

The next morning, 25 September 2020, Jackson called the FDA to warn about unsound practices in Pfizer’s clinical trial at Ventavia. She then reported her concerns in an email to the agency. In the afternoon Ventavia fired Jackson—deemed “not a good fit,” according to her separation letter.

Jackson told The BMJ it was the first time she had been fired in her 20 year career in research.

In her 25 September email to the FDA Jackson wrote that Ventavia had enrolled more than 1000 participants at three sites. The full trial (registered under NCT04368728) enrolled around 44 000 participants across 153 sites that included numerous commercial companies and academic centres. She then listed a dozen concerns she had witnessed, including:

Within hours Jackson received an email from the FDA thanking her for her concerns and notifying her that the FDA could not comment on any investigation that might result. A few days later Jackson received a call from an FDA inspector to discuss her report but was told that no further information could be provided. She heard nothing further in relation to her report.

In Pfizer’s briefing document submitted to an FDA advisory committee meeting held on 10 December 2020 to discuss Pfizer’s application for emergency use authorisation of its covid-19 vaccine, the company made no mention of problems at the Ventavia site. The next day the FDA issued the authorisation of the vaccine.8

In August this year, after the full approval of Pfizer’s vaccine, the FDA published a summary of its inspections of the company’s pivotal trial. Nine of the trial’s 153 sites were inspected. Ventavia’s sites were not listed among the nine, and no inspections of sites where adults were recruited took place in the eight months after the December 2020 emergency authorisation.

The FDA’s inspection officer noted: “The data integrity and verification portion of the BIMO [bioresearch monitoring] inspections were limited because the study was ongoing, and the data required for verification and comparison were not yet available to the IND [investigational new drug].”

In recent months Jackson has reconnected with several former Ventavia employees who all left or were fired from the company. One of them was one of the officials who had taken part in the late September meeting. In a text message sent in June the former official apologised, saying that “everything that you complained about was spot on.”

Two former Ventavia employees spoke to The BMJ anonymously for fear of reprisal and loss of job prospects in the tightly knit research community. Both confirmed broad aspects of Jackson’s complaint. One said that she had worked on over four dozen clinical trials in her career, including many large trials, but had never experienced such a “helter skelter” work environment as with Ventavia on Pfizer’s trial.

“I’ve never had to do what they were asking me to do, ever,” she told The BMJ. “It just seemed like something a little different from normal—the things that were allowed and expected.”

She added that during her time at Ventavia the company expected a federal audit but that this never came.

(An FDA review memorandum released in August this year states that across the full trial swabs were not taken from 477 people with suspected cases of symptomatic covid-19.)

“I don’t think it was good clean data,” the employee said of the data Ventavia generated for the Pfizer trial. “It’s a crazy mess.”

A second employee also described an environment at Ventavia unlike any she had experienced in her 20 years doing research. She told The BMJ that, shortly after Ventavia fired Jackson, Pfizer was notified of problems at Ventavia with the vaccine trial and that an audit took place.

Since Jackson reported problems with Ventavia to the FDA in September 2020, Pfizer has hired Ventavia as a research subcontractor on four other vaccine clinical trials (covid-19 vaccine in children and young adults, pregnant women, and a booster dose, as well an RSV vaccine trial; NCT04816643, NCT04754594, NCT04955626, NCT05035212).

The advisory committee for the Centers for Disease Control and Prevention was set to discuss the covid-19 paediatric vaccine trial on 2 November.