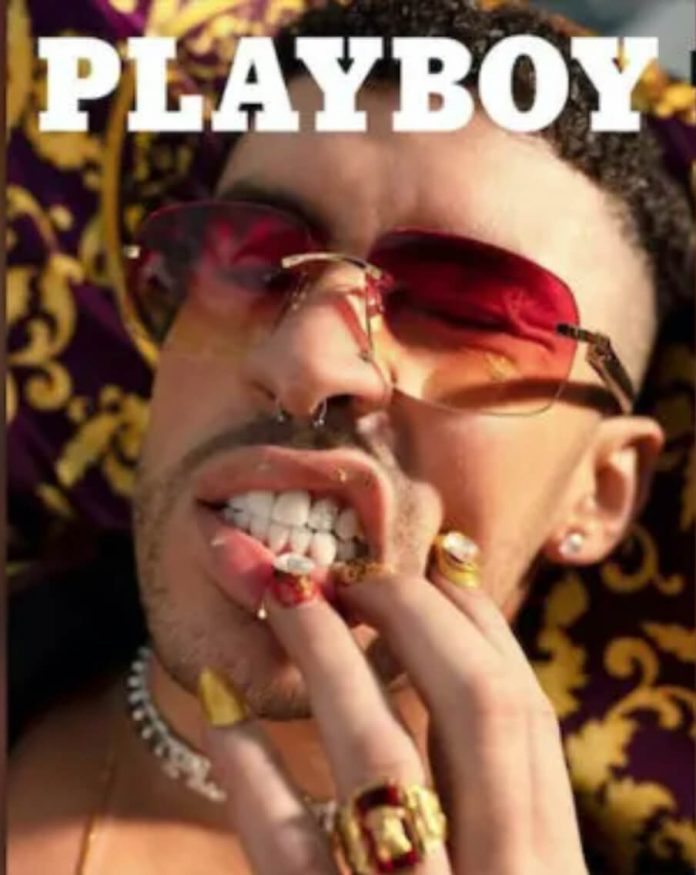 Playboy have put a “gender fluid” man wearing make up, false nails and a revealing black and gold toga on their cover.

Besides calling himself ‘Bad Bunny’, there is nothing else about this man that makes you think he should be gracing the cover of Playboy.

‘Bad Bunny’ is a Puerto Rican musician with 27 million Instagram followers who is described as a “Latino queer ally known for his flamboyant style.”

However, I’m not entirely convinced that Playboy readers are excited to see a “gender fluid” man prancing around in false nails and a revealing black and gold toga. Actually, I’d go further than that and say that is absolutely not the type of content they want to find when they ‘read’ Playboy.

RT report: Obviously like many other brands in the world of publishing, Playboy is feeling the pinch. It is entirely released online as of March this year, and so it is looking for ways to keep the audience engaged and attract new readers.

Previously, it managed to do this by relying on the tried and tested model of boys reaching a certain age and discovering they rather liked looking at attractive women. I would hazard a guess that this, broadly, remains the case.

However, Playboy has decided that a better way to get a bigger audience is by going woke, because obviously there isn’t enough political correctness floating around in the world right now.

I can’t help but feel that, as a marketing move, putting a dude on the cover of Playboy (Latino queer ally or otherwise) makes about as much sense as Good Housekeeping putting a Lamborghini on its cover.

This is just a blatant abandonment of its core audience; there are hundreds of magazines and websites that cater for the woke market, so Playboy has no more need to go after Vox’s audience than GH does to chase Autocar’s.

Playboy isn’t the only ‘men’s mag’ to fall victim to this unwelcome progressivism. Even a casual reader of GQ will have noticed the overt wokery that has infected its pages over the past few years.

A cursory flick through GQ UK’s homepage finds that the lists of outrageously expensive watches and advice on which type of moustache it is acceptable to have in 2020 are now liberally interspersed with articles about how “If your idea of equality doesn’t include black trans lives, it isn’t equality,” how gay dating app Grindr is “rife” with racism, and one bluntly titled “White people: this is what you need to do.”

All fine and dandy, of course, but a bit bizarre from a publication whose primary function is to tell me what kind of jacket is ‘in’ for Autumn/Winter 2020.

But then even when we do get into the clothing section, its lists of “best dressed men of the week” increasingly feature, well, men in dresses. Obviously, you’re free to wear whatever the hell you like, but after the tenth picture of a bloke in a ballgown you can’t help but feel there is some sort of agenda being pushed.

Even if has decided its main editorial mission is now to push progressive woke politics, you’d think it would have the sense to keep the traditional Playboy bunnies on the cover to get guys to click through in the first place.

Ironically, given the bizarre direction woke politics has taken in the media landscape, actually publishing a traditional Playboy cover, like they did with Kate Moss in 2014, would probably be the most transgressive thing they could do.

Previous articleRevelations 23
Next articleHave Your Say