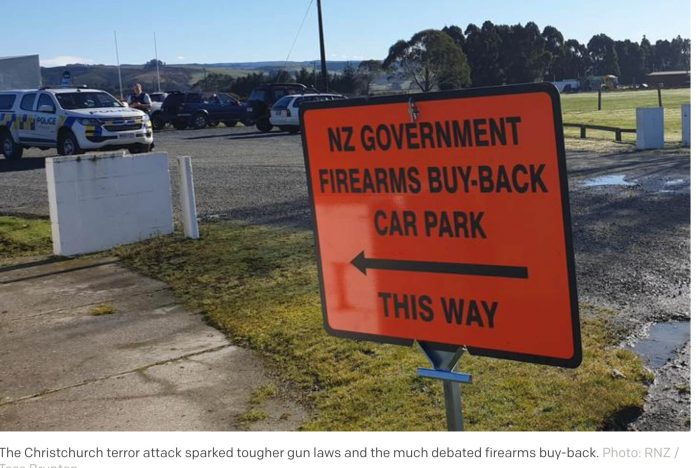 Rise in gun crime despite government clampdown after terror attack

The government’s clampdown on firearms and seizures of high-powered semi-automatic weapons has had no impact on a rise in gun crime and violence in New Zealand.

Today marks the second anniversary of the Christchurch terror attacks, in which military style semi-automatic weapons, purchased legally, were used to gun down 51 innocent worshippers.

That sparked tougher gun laws and the much debated firearms buy-back.

Police figures show 2399 people were charged with 4542 firearm-related offences, nearly double that of a decade earlier.

In total, 1862 firearms were seized under sections 6 or 18 of the Search and Surveillance Act, more than double the 860 that were seized a decade earlier.

ACT MP Nicole McKee said the government had made the wrong moves when it came to firearms reform since the 15 March attack.

She said gun owners had been made to feel like criminals and that had led to less safety around firearms than before the terror attack.

“I absolutely believe that. And my reasoning behind that is because of the confusion, the blame as well that was put on licence-holders,” McKee said.

“We had Minister Nash stand up and tell the country that if you don’t hand in your guns we’re going to come after you, so when people are still finding out later that they’ve got what is now a newly prohibited firearm, they’re now too scared to do anything with it.”

Hera Cook from Gun Control New Zealand said the laws had been a great success and will make New Zealand a far safer place.

She said they would make it virtually impossible for a mass shooting to take place in this country again.

Cook is not convinced that firearms crime is rising as much as the numbers would suggest, instead saying police data collection had improved.

But she admitted it was a possibility that there has been an increase in gun crime with the arrival of deportees from Australia.

“I think what’s probable is that both things are happening. What we’re seeing is that the 501s are bringing more organised crime into New Zealand,” Cook said.

“Police are combatting that and police seem to be being pretty effective. I think we as New Zealanders should feel really good about the fact that police are picking up a lot more gun offences.”

Sporting Shooters Association president Neville Dodd said there was no simple solution to the rise in firearms crime and in particular gang crime.

But Dodd said the police had lost a huge amount of trust from firearms owners over the past two years.

He said the police never admitted they should not have given the Christchurch terrorist a firearms licence in the first place, an error that the Royal Commission suggested could have prevented the attack from happening altogether.

“The thing that troubles me most is that police didn’t have the integrity to say right from the outset, ‘we stuffed up, this guy should never have got a licence’.”

Dodd said that had cost the police plenty of support.

“As a result, 241,900 New Zealanders who’ve been carefully vetted, unlike Tarrant, alienated, no longer support the police and that to me is the biggest tragedy of all because we had a very good rapport with police, and that’s gone.”

RNZ requested an interview with the police.

In a statement, police said there is a strong focus on stopping violence and the impact of organised crime groups and gangs, where a high number of the firearms incidents take place.

They said emphasis had been placed on disrupting the manufacture, modification and supply of firearms to these groups.

“We do have an increasing issue with gun use, particularly amongst our organised criminals so for me that is more rationale for the kinds of legislation we already put in place,” Ardern said.

“That includes things like creating a gun register, which we continue work on in earnest, increasing penalties, as well as of course the buy-back.

“One of the things that we did hear from police at the time … was that guns were increasingly present for the police.

“So yes, we have removed a particular form of weapon from circulation. But that does not mean of course that there are not still weapons in use by gangs, or that they are not available.

“For me, it strengthens rationale for having that gun register, for increasing those penalties.”

Reducing gun crime would not come down to just the gun register, Ardern said.

“It’ll come to, for instance, the extra emphasis we’re putting into combatting organised crime … so it is going to come down to a number of measures, but we’re up against what has been a growth in a particular new gang that has come about as a result of deportations out of Australia.

“That has almost had a tit-for-tat result with our existing gangs in New Zealand with additional increase in recruitment there. These are things that are going to take some time to turn around.”

But Ardern said there had “for a long time” been a call for Parliament to make gun law reforms but there had been “political hesitance”.

The government had “never” attempted to alienate legitimate gun users, she said.

“What we have targeted is a specific type of weapon, for instance those military-style semi-automatics, which we see no good reason for in New Zealand, and of course those who choose to use weapons for illegal activity.

Previous articleHave Your Say
Next articlemRNA Injections Are Not Vaccines