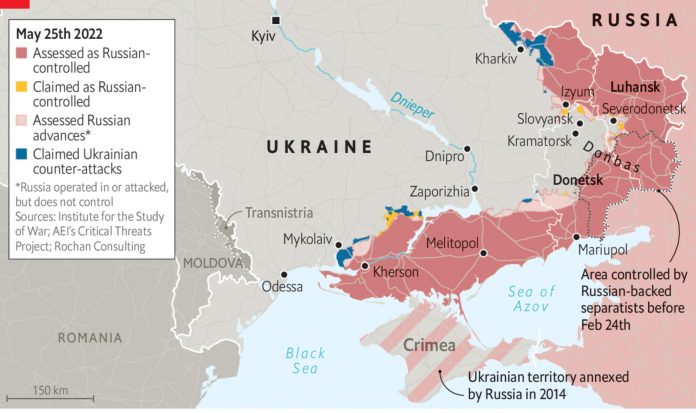 It now takes only 57 rubles to purchase a dollar. May 19 was the last time I reported on the exchange rate, when it was 65:1. That a rise of 12 percent in five days.

If the purpose of the sanctions was to crash Russia’s economy, it has failed.

The big crack in the Babylonian image

Klaus Schwab’s World Economic Forum is meeting in Davos this week, and things are not going quite as they had hoped. There is some disagreement as to how they think the Ukraine situation should be handled.

Ukrainian president Zelensky appeared at the meeting in an online meeting and received the first standing ovation in history.

Then Henry Kissinger told Zelensky that he should make peace with Russia and agree to give up its eastern territory with its Russian-speaking population.

Coming from Klaus Schwab’s mentor, the architect of the New World Order, Kissinger recognizes that things are not going as well as they had hoped. In spite of the media’s claim that Russia is getting “bogged down” in Ukraine and that Russia is losing the war, Kissinger obviously does not believe the western propaganda. He was quickly blasted by some of the western media for even suggesting a peace deal to cut their losses.

This has to be the first time that the mainstream media has ever criticized its hero.

There are other signs of disunity in the Eurozone as well, especially over the purchase of oil and gas from Russia. The German government fumes, but for now they have no choice but to buy it on Russia’s terms. Poland and Bulgaria, being more ideological, refuse to comply, cutting themselves off from the supply lines. Italy has increased its imports in order to supply Germany with Russian oil and gas.

One does not win a war by shooting oneself in the foot. The west’s Russophobia and hatred in the past 30 years seems to have blinded Europe and America to economic realities. The west has followed a globalist agenda, which means it has made itself dependent upon other countries for many of its essential commodities. It was globalist ideology that made Europe dependent upon Russian oil and gas.

Globalism was supposed to unite the world under a one-world government. In this arrangement, the west outsourced its manufacturing to China and made itself dependent on Russian commodities. The west became a money-based economy. From what I hear, Putin’s original university thesis argued that world power depended more on self-sufficiency of energy and food than on monetary control. So he worked to build Russia’s oil and gas production and turned the country into an exporter of food.

His policies from the past 20 years are now bearing fruit. The west is finally waking up to this reality and are very angry to learn that they were wrong all along. They thought that sanctions would cripple Russia’s economy and destroy the ruble within days. They thought Russia would crumble like Iraq, Venezuela, and Iran. That simply did not happen, although the media pretends that it is so. Russia did indeed take a gut punch for a few weeks when sanctions were imposed, but it recovered quickly when Putin demanded rubles for its oil and gas.

For the most part, the sanctions have only hit wealthy Russians who want to purchase luxury items from the west. Now they have to get them from the eastern countries and from India.

The sanctions were supposed to be supported by the whole world. Instead, sanctions drove a huge wedge between Asia and Europe, dividing the world and destroying globalism. The plan for world government has now been replaced by a plan for totalitarian control in western countries, leaving Asia to do as it wishes. A crack of this size is sure to collapse the Babylonian image.

We are nearly to the place where the Spirit of God will be sent forth to empower God’s Universal Empire to replace the failed attempt to establish the Babylonian world empire. To use Frank Baum’s metaphor in The Wizard of Oz, the wicked witch of the east was killed in 1991 when the communist Soviet Union fell and was replaced by Orthodox Russia. Now the wicked witch of the west is being threatened as western monetary systems begin to fail.