You Stupid Boy
Home NZ Politics Seymour Does It Yet Again!

Seymour Does It Yet Again! 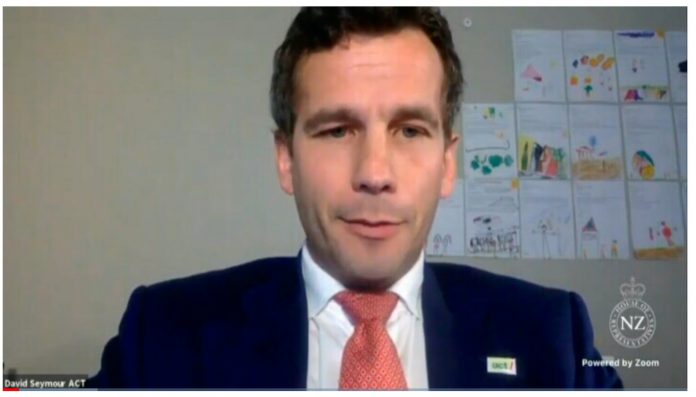 The Attorney-General’s decision not to release Crown law advice about the COVID-19 lockdown has angered Opposition MPs who say Kiwis deserve to see the legal basis on which their civil liberties were restricted.

As Attorney-General, Labour MP and minister David Parker acts as the chief law officer of the Crown and has responsibility for supervising New Zealand law and advising the Government on legal matters.

He appeared before the Epidemic Response Committee on Thursday and was asked by ACT leader David Seymour if he is prepared to allow the public to see the advice on the alert level 4 lockdown enforced on March 25.

Seymour said there was “significant confusion” about what Kiwis were allowed to do and what powers police had, and it wasn’t until more than a week later that clear guidance was released about the rules that citizens and police were operating under.

“In the intervening period, New Zealanders were being arrested,” Seymour said. “The public needs to know that during this period police were acting within the law and not simply operating on the basis of the Government’s public statements.”

Seymour referred to when former Police Commissioner Mike Bush appeared before the committee earlier this month, and said he would ask the Solicitor-General about releasing the advice after concerns were raised about police using discretion.

“It’s difficult to see how the public interest and the rule of law can be outweighed by any other consideration other than the fact that you have the ability to object to it being released,” Seymour said.

Parker said he is “satisfied” the Government followed the law and is confident the Bill of Rights Act has not been breached.

The Prime Minister issued an epidemic notice under section 5 of the Epidemic Preparedness Act 2006 on March 24, allowing the use of special powers by medical officers in accordance with section 70 of the Health Act 1956.

The Government then triggered a state of national emergency under the Civil Defence and Emergency Management Act (CDEMA) on March 25, giving authorities more powers to manage the virus outbreak.

The three laws allowed the Government to order the closure of premises, with the exception of essential businesses, as well as prohibit mass gatherings, require arrivals into New Zealand to be isolated or quarantined, and order people to stay home.

Opposition leader Simon Bridges argued that it’s in the public’s interest to have the advice released so that it can be scrutinised and MPs can be certain the law was followed.

Parker responded: “I’m confident that the Crown is right in the legal position that we take. We’re not releasing the advice but if you want to contest that position that’s not for this committee or for me.”

He said he takes advice from the Solicitor-General as to whether privilege should be waved but “there is no advice I’ve had that we should waive it”.

Bridges said if Parker is confident the law has been followed then he should release the advice. He questioned the legality of some of the lockdown rules, such as a ban on surfing.

“I remember as a minister releasing legally privileged advice because it didn’t make any difference and it didn’t worry me.”

Parker said the law is “abundantly clear” that governments “can for reasons of public health restrict people’s liberties”.

Seymour asked Parker if he would release the advice to the committee in confidence, but the Attorney-General said: “I doubt it.”

In other words Plod was lying and is being protected by the COL ministers.