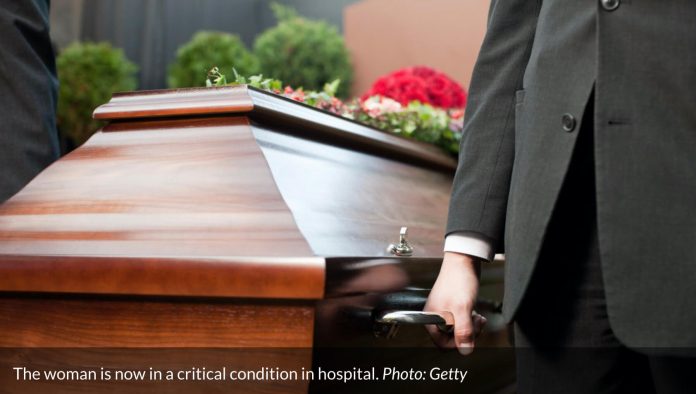 A young woman who was declared dead at her suburban Detroit home opened her eyes at a funeral home as she was about to embalmed.

“They would have begun draining her blood, to be very, very frank about it,” lawyer Geoffrey Fieger told WXYZ-TV.

The Southfield fire department acknowledged it was involved in a bizarre set of events on Sunday that began when a medical crew was summoned to a home where a 20-year-old woman was unresponsive.

Paramedics tried to revive the woman for 30 minutes and consulted an emergency room doctor, the department said.

The doctor “pronounced the patient deceased based upon medical information provided” from the scene, the department said.

The Oakland County medical examiner’s office said the body could be released to the family without an autopsy, according to the fire department.

But then came a startling discovery at the James H. Cole funeral home in Detroit: The woman was still alive more than an hour later.

“Our staff confirmed she was breathing” and called an emergency medical crew, the funeral home said.

Mr Fieger, who was hired by the family, identified the woman as Timesha Beauchamp.

“They were about to embalm her, which is most frightening, had she not had her eyes open. … The funeral home unzipping the body bag – literally – that’s what happened to Timesha, and seeing her alive with her eyes open,” Mr Fieger said.

Mr Fieger didn’t return a message from The Associated Press.

“My heart is so heavy. Someone pronounced my child dead, and she’s not even dead,” Ms Beauchamp’s mother, Erica Lattimore, told WDIV-TV.

This is why so many will be going to Cullens and Winston’s funerals. To make sure the bastards are finally dead.

Previous articleHave Your Say
Next articleScientists disagree, but “be kind” anyway.